What you need to know about Apple's processors for Mac 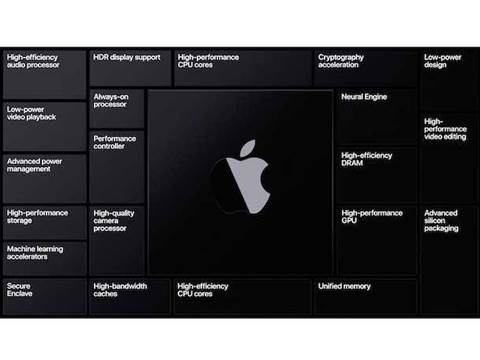 Apple Monday confirmed long-running rumors that it plans to phase out Intel processors in its Mac lineup in favor of Arm-based chips designed in-house. What the Cupertino, Calif.-based tech giant did not do was provide a lot of specifics around the processors themselves. Instead—as the announcement came at Apple's virtual Worldwide Developers Conference (WWDC) 2020—executives focused on what the new chips will mean for developers, what new features the processors will enable and what the rough timetable is for the rollout.

What follows are five key things to know about Apple's processors for Mac.

Details on the processors

Apple has already been designing its own Arm-based processors over the past decade for devices including the iPhone and iPad. The company will now be leveraging that expertise in designing chips for the Mac that offer high performance and low power consumption, said Apple's senior vice president of hardware technologies, Johny Srouji. However, the company did not disclose specifics on what processors it will be launching, and said that "transition kit" devices for developers will run Apple's A12Z processor, which is used in the latest iPad Pro models.

"I am very disappointed Apple didn't provide a lot of technical details to give confidence to users and developers in the Arm-based processor Mac experience," said Patrick Moorhead, president and principal analyst at Moor Insights and Strategy. "We know Apple will profit from a reduced BOM [bill of materials] cost, but before developers lift a finger, they should ask themselves what they get from making investments to changes any of their code."

One executive at a solution provider partner of Apple, who asked to not be identified, said he is looking forward to hearing more details on the processors' performance in the fall. "They highlighted the A12Z chip, which is already used on the latest iPad Pro and runs at approximately 2.5GHz—so that gives some impression of performance in their event demos," the executive said.

Developers will soon be able to get started trying out the new chips with the transition kit device that includes the A12Z processor. "Everything developers need to build apps for these new chips is built into the new version of Xcode. To get started, developers just open their app projects and recompile," said Craig Federighi, senior vice president for software engineering at Apple, during the WWDC keynote. "The vast majority of developers can get their apps up and running in just a matter of days."

App makers that have already begun recompiling and testing apps for running on Apple-made silicon include Microsoft and Adobe. Notably, the Macs with Apple-made processors will be capable of running unmodified, native iPhone and iPad apps, thanks to the "shared architecture" between the processors that will be used across Mac, iPhone and iPad, Federighi said.

"I'm very impressed with their Day One native app support—including Microsoft and Adobe, it appears," the solution provider executive said.

To ensure that all apps run on the new Macs from the get-go, Apple's forthcoming new version of its Mac operating system, macOS Big Sur, will include Rosetta 2 software to automatically translate existing Mac apps so they run on Macs with Apple silicon, Federighi said.

"It translates the apps when you install them, so they can launch immediately and be instantly responsive," he said. "And Rosetta 2 can also translate code on the fly when needed—like for web browsers with just-in-time JavaScript compilers, or for Java code. It even handles the most complex pro apps and their plugins." Ultimately, "Rosetta 2 is transparent to users, and the performance is amazing," Federighi said.

The Rosetta 2 tool "could solve all gaps, it appears, with automatic app translation at install time and transparency to the end user," the solution provider executive told CRN.

Timetable for the rollout

Apple said that the first Macs with in-house processors will launch by the end of the year—although the company didn't specify which Mac models could include the Arm-based chips. Apple also signaled that the move away from Intel will be gradual. "We expect the transition to take about two years," Apple CEO Tim Cook said.

Notably, Apple does have "some new Intel-based Macs in the pipeline that we're really excited about," Cook said. And the company will continue to support and release new macOS versions for Intel-based Macs "for years to come," he said.

Apple started using Intel processors for the Mac line in 2006 in a move away from PowerPC processors. Apple accounts for less than 5 percent of Intel's annual revenue, and the short-term impact will not reach that full amount due to Apple not transitioning fully away from Intel at first, Evercore analyst C.J. Muse told The New York Times last week. However, the move by Apple could inspire more device makers to consider non-Intel chips, hurting Intel's reputation, Moorhead said in the Times story.

In a statement provided to CRN on Monday, Intel said that "Apple is a customer across several areas of business, and we will continue to support them."

"We believe Intel-powered PC—like those based on our forthcoming Tiger Lake mobile platform—provide global customers the best experience in the areas they value most, as well as the most open platform for developers, both today and into the future," Intel said in the statement.

Apple is believed to be interested in developing its own processors to reduce its dependencies on suppliers. Along with device timetables not always lining up with those of suppliers, manufacturers such as Apple are continuing to grapple with CPU shortages from Intel that have constrained device production.

Eliminating departmental friction within MSPs
By Kyle Alspach
Jun 23 2020
10:54AM