What you need to know about AWS Snowcone 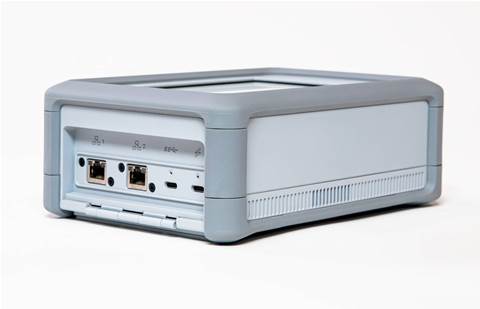 The new offering includes support for AWS IoT Greengrass, the ability to run Amazon Elastic Compute Cloud (EC2) instances and local storage. It can be used as an IoT hub, data aggregation point, application monitor or lightweight analytics engine. After collecting and processing data, users can move it from AWS Snowcone to the AWS cloud either offline or online, by shipping the device to AWS using its E Ink shipping label or using Ethernet or Wi-Fi with AWS DataSync, which are preinstalled on the device.

About the size of a tissue box, AWS Snowcone is small enough to fit in a conventional mailbox or small backpack—or attach to a drone—and is the most diminutive member of AWS’ Snow line of portable edge devices used to collect and process data, run local computing applications and move large volumes of data from log files, digital media, genomic data and sensor data from connected devices to AWS. Snow products also include the suitcase-size AWS Snowball and AWS Snowmobile, a 45-foot-long ruggedized shipping container that’s pulled by a semi-trailer truck.

AWS customer use of Snowball devices has greatly increased since their introduction in October 2015 and so has the need for a smaller device with more portability, according to Bill Vass, AWS’ vice president of storage, automation and management services.

“With more applications running at the edge for an expanding range of use cases, like analyzing IoT sensor data and machine-learning inference, AWS Snowcone makes it easier to collect, store, preprocess and transfer data from harsh environments with limited space to AWS for more intensive processing,” Vass said. “It's great for lightweight analytics on the edge. It's got containers and EC2 instances on it, and it lets people connect to the cloud really easily.”

Customers can order AWS Snowcone from the AWS Management Console, and AWS will ship the devices directly to their edge locations. AWS Snowcone is an AWS-managed service, with AWS providing direct support to customers.

Here’s a look at what you should know about AWS Snowcone.

Measuring 9 inches long, 6 inches wide and 3 inches deep, AWS Snowcone’s gray enclosure reflects infrared heat and is dust-tight and water- and wind-resistant, with a rubberized coating around the port door that seals when closed. The enclosure meets stringent standards for ruggedization, free-fall shock—it tolerates falls up to 3.8 feet—and operational vibration, according to AWS.

AWS Snowcone’s E Link shipping label, which is designed for shipping without a box, serves as a touch screen during operation. It takes three clicks to set up Snowcone, which currently is available in AWS’ U.S. East (Northern Virginia) and U.S. West (Oregon) cloud regions.

The new device can operate in temperatures ranging from freezing to desertlike conditions (38 degrees C/100 degrees F). It can withstand harsher temperatures— as low as -32 degrees C/-25.6 degrees F or as high as 63 degrees C/145.4 degrees F —while in storage or being shipped.

AWS Snowcone features two virtual CPUs, 4 GB of random-access memory and 8 TB of storage. It has two USB-C ports for power or an optional, external battery pack that can be snapped to the bottom of the device and is good for about six hours of runtime at 25 percent utilization.

When a customer wants to return the Snowcone, the E Link shipping label automatically updates to ensure it’s delivered to the right AWS cloud region, with shipping handled by AWS.

Data on Snowcone is automatically encrypted using military-grade, 256-bit keys that never are stored on the device and can be managed using the AWS Key Management Service.

AWS Snowcone has anti-tamper and tamper-evident features to help ensure data on the device stays secure during transit. Erasure of the data also is secure and verified, according to AWS, and adheres to the U.S. Department of Commerce’s National Institute of Standards and Technology guidelines for media sanitization.

“Just like a Snowball, the data is multilayer-encrypted,” Vass said. “Companies like Deluxe [Entertainment Services], for example, with their One VZN, can use it for secure movie distribution and feel secure about it in transit.”

Los Angeles-based Deluxe Entertainment Services, a video creation and distribution company, unveiled the launch of One VZN (pronounced “vision”), a cloud-based IP delivery solution for distributing major studio and independent content such as films, trailers and ads to movie theaters.

The solution will allow for same-day global delivery of theatrical releases that currently is done by satellite or hard drives shipped by Deluxe to theaters. It can overcome on-site storage constraints by sending smaller, customized content packages and providing a small infrastructure footprint in theaters, the company said.

One VZN is a “leap in innovation for digital cinema distribution, which has been stagnant over the past decade,” according to Andy Shenkler, Deluxe’s chief product and technology officer.

“One VZN is poised to be one of the most important innovations in digital cinema distribution in the past decade, fundamentally changing not only the economics of film distribution for exhibitors and studios around the globe, but also enabling new theatrical experiences for viewers as well,” Shenkler said in a statement. “The secure, compact AWS Snowcone device, in conjunction with Deluxe’s powerful cloud-based solutions, create a truly differentiated solution of the industry.”

Deluxe will pilot One VZN in select North American theaters—including Premiere Cinemas, Emagine Entertainment, Classic Cinemas and ArcLight Cinemas—as they begin to reopen with the lifting of coronavirus (COVID-19) restrictions.