Why security wasn't baked into the web, from the inventor 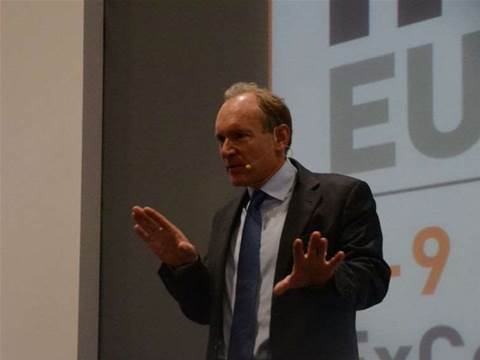 Openness was so important to the web in its early days that even security would have slowed it down, according to its creator, Tim Berners-Lee.

The English computer scientist was asked at IPExpo in London whether he regrets not building more security into the web, as cybercrime and surveillance push many to more secure protocols such as HTTPS.

"Some stuff is having to be refitted after the fact, but I don't think it could have been any other way," Berners-Lee said, adding that to consider security at such early stages would have been too complicated, as at the beginning, the specifications for HTTP took only one page.

"You can never think up all the security threats in advance," he said. "It's amazing how loopholes turn up... We have to be constantly revising the systems to be in order to fix them."

Dark side of the web

Berners-Lee was also asked if he foresaw the "dark side" of the web. He answered that it reflected reality. "When you look at the web, you see humanity in general," he said.

"The web is not there to judge; the web is a white sheet of paper," he added. "It'd be awful if we had a web you could only do nice things [with]."

That said, he does think we need to resist government surveillance, although it may be "inevitable". While we may need emergency powers in place at times, he said we need to ensure they don't become permanent - as the US Patriot has become.

The web is not there to judge; the web is a white sheet of paper

While he said Brits have traditionally trusted their government too much - calling it the James Bond effect - there is some good news: the head of Government Communications Headquarters swung by Berners-Lee's office to ask for advice on building a better system. Berners-Lee admitted it's tough to allow GCHQ to be powerful while still keeping it accountable.

"It's hard to make people do difficult things," he said.

Open from the beginning

Alongside open data, Berners-Lee has long promoted the open web - right back from when he created its first building blocks - and he's continued to campaign for net neutrality.

He said the wonderful thing about the internet was it was an open platform that didn't "have any attitude" about what you did with it, giving him the ability to build the web.

Berners-Lee admitted it was "hard work" keeping the internet open, but said openness was why the web worked.

"If you want to build something new... you don't have to come to me to ask permission," he said, noting that if he'd charged ten cents for every website, it would have limited growth and closed competitors would have popped up.

Instead, by keeping the web open, it's enabled "mindblowing" and "ridiculous creativity", he said.