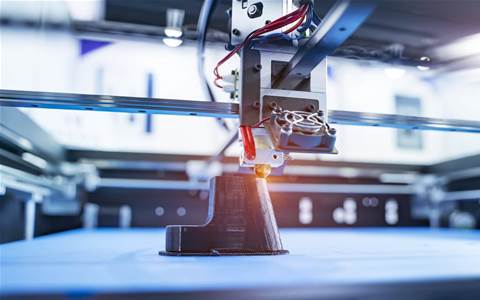 3-D printing technology is proving an essential tool in the fight against COVID-19 and could see much wider deployment in the future as a result of its increased exposure during the crisis, executives and solution providers in the 3-D print industry told CRN.

Systems from 3-D print vendors including HP Inc., Markforged and Formlabs are being used to print desperately needed medical supplies such as nasal swabs for coronavirus testing, face shields and ventilator parts.

3-D print's advantages have been front and center during the pandemic: the ability to move directly from design to production has enabled rapid responses to medical needs, while geographically dispersed printers can allow production wherever the needs happen to be. This raised awareness about 3-D printing could accelerate the expansion of the industry, executives and solution providers said.

"This could be some kind of inflection point," said Michael Papish, vice president of marketing at Markforged, the maker of industrial 3-D printers such as the X7.

"If you think about the longer scope of this industry, I think 3-D printing has in some sense been a technology that has been searching for a problem," Papish said. "There was a lot of overhyping of this technology early on--like, 'we're going to print entire cars or helicopters.' I don't think that's the right application of this technology. What we're seeing now is a very stark example of why you need more agile ways of building a supply chain, and exactly where you can use this technology."

At HP--the maker of the Multi Jet Fusion industrial 3-D printer--CEO Enrique Lores agreed that the crisis "is showing the value that 3-D printing can have."

"It makes the time between design and production much shorter than with older technologies. And it allows local manufacturing, which is critical in a period like this," Lores said in an interview with CRN. "It is really highlighting how 3-D printing has the potential of transforming the manufacturing industry."

HP and others using its 3-D printers have been printing parts used in face masks, face shields and respirators, along with devices such as hands-free door openers. To date, HP--along with its partners and customers--have produced more than 150,000 parts for medical applications, the company told CRN.

For instance, GSC, an HP 3-D print partner has printed adapters for face mask filters that have been needed by the Milwaukee Police Department.

"Every day that went by without having these, every officer and detective was at risk of the virus," said David Kasinkas, president and owner of GSC. "Utilizing HP technology, we actually created 600 of these adapters and retrofitted them to the Milwaukee Police Department's masks. It was just a huge success story."

Another partner, Hawk Ridge Systems, has been using its HP machines to print medical parts such as visors for face shields.

"It's one of those situations where everybody kind of pauses and says, 'we are really vulnerable from a supply chain standpoint,'" said Paul Rudin, vice president of digital manufacturing at Hawk Ridge Systems.

"I think that 3-D printing is definitely going to see an uptick due to this situation," Rudin said. "Nobody likes the massive exposure due to a catastrophic event like this. However, it is a little bit of the silver lining that more and more people are getting exposed to the technology, and to how quickly you're able to design and create parts."

HP said that customers including SmileDirectClub and custom insole maker Superfeet have been using their HP 3-D printers to produce medical parts, as well.

Additionally, HP has developed a 3-D printed test swab, which has been clinically validated by Beth Israel Deaconess Medical Center, the company told CRN. HP is now working with its partner and customer network to find capacity for mass production of the swabs, the company said.

At Markforged, one project in response to the coronavirus crisis has involved designing and testing a 3-D printable face shield, of which customers and partners have now printed more than 1,300.

Another major effort has been producing a 3-D printed test swab with photometry company Neurophotometrics. The swab (pictured above) has been validated at Rady Children's Hospital-San Diego and the University of California San Diego.

The plan is to scale from printing 10,000 swabs a day to 100,000 swabs a day, to accommodate the massive orders for the swabs, Papish said. "That's our No. 1 project right now in the United States, to ramp up the availability of these swabs."

Formlabs, maker of 3-D printers including the Form 3, has also produced and tested a nasal swab, in collaboration with the University of South Florida Health and Northwell Health of New York. Production is expected to ramp up to 100,000 swabs a day soon, said David Lakatos, chief product officer at Formlabs.

Following the COVID-19 crisis, it would be surprising if most hospitals do not end up getting a 3-D printer on site, Lakatos said.

Ultimately, the crisis is a "powerful example" of how 3-D printing can "have a very major advantage over traditional manufacturing," he said.

"There's no other technology like 3-D printing," Lakatos said. "We went through several iterations and we ramped up manufacturing within these first two to three weeks. That's unimaginable in any other type of manufacturing technology."