Why you should check out Lenovo's ThinkBook 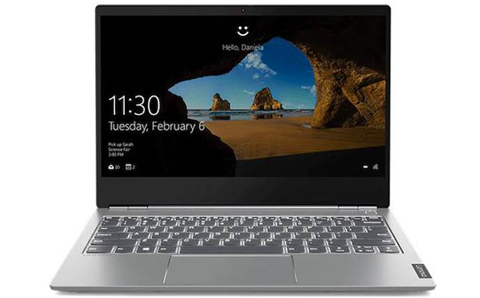 Lenovo is boosting its efforts to serve the business market with a new notebook aimed at small and medium-sized businesses. As Lenovo's ThinkPad business notebooks continue to see strong demand, the company has introduced the ThinkBook, a notebook targeted for SMBs and millennial-aged users.

The ThinkBook aims to combine popular elements of the ThinkPad with an enhanced design and a price level that will appeal to SMBs. Compared to Dell's Vostro and HP's ProBook lines of SMB notebooks, the ThinkBook is "thinner, it's lighter, it's faster. And aesthetically, the design is just off the charts," said Matthew Zielinski, president of Lenovo’s North America Intelligent Devices Group. "If you look at it relative to what you'd expect from an SMB-grade device, it's just so much more than that."

What follows are five key reasons to check out the Lenovo ThinkBook.

The ThinkBook parts ways with the classic black carbon-fiber chassis of the ThinkPad—instead, adopting an all-aluminium chassis sporting a "mineral grey" colour.

The ThinkBook is designed to have slim bezels around the display, especially on the left and right sides. The display itself features an IPS panel with FHD (1920 x 1080) resolution. The ThinkBook comes in two display sizes—13.3 inches for the ThinkBook 13s model, and 14 inches for the ThinkBook 14s. The 13s features a brighter screen, up to 300 nits, with Dolby Vision HDR technology. The 14s display goes up to 250 nits of brightness and does not offer Dolby Vision HDR. Both displays are designed for anti-glare.

Even with that portable form factor, the ThinkBook manages to continue the ThinkPad's tradition of durability—with features such as a spill-resistant keyboard and the ability to withstand extreme temperatures.

Lenovo doesn't skimp on performance or port connectivity with its new ThinkBook. The notebook offers powerful eighth-generation Intel "Whiskey Lake" processors—the same CPUs that are found in many current ThinkPad models. Users have a choice between the Intel Core i5-8265U (clock speed of up to 3.9 GHz) and the Core i7-8565U (up to 4.6 GHz).

Both models of the ThinkBook are also generous on ports, with the notebooks offering one USB-C port, two UBS-A ports and HDMI.

Lenovo has included a number of helpful extras in the ThinkBook, such the ability to quickly boot up and log in simultaneously--thanks to a power button that doubles as a fingerprint reader. The ThinkBook also offers hot keys that are enabled for answering or hanging up Skype calls; noise-cancelling microphones; the ability to listen to music while the laptop is in standby mode; enhanced security via an integrated webcam cover and Trusted Platform Module encryption; fast-charging; and support for docking via USB-C. In addition, the ThinkBook includes Dolby Audio technology with Harman speakers as well as a solid-state storage drive.

Lenovo has priced the ThinkBook models to be appealing for the often budget-constrained SMB market. In Lenovo's Australian online store, the ThinkBook 13s has a starting price of $1359, while the ThinkBook 14s is not available for purchase just yet.

The ThinkBook offers standard business capabilities in security and manageability rather than full enterprise-class capabilities, which helps with affordability, Lenovo has said.

Grow your software revenue by selling these 5 affordable, essential tools for the modern workplace
By Staff Writers
Jun 18 2019
11:22AM