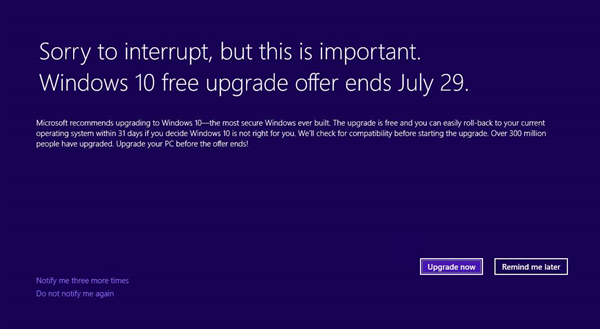 “Hey you're using Windows 7. Did you know you could upgrade to Windows 10 free of charge?”

“HEY! You're using dusty old Windows 7! Did you KNOW you could UPGRADE to new and shiny Windows 10 FREE OF CHARGE?”

As I hope that short one-act play demonstrated, you have been able to upgrade to Windows 10 from Windows 7 or 8 since the operating system launched last July and Microsoft hasn't been shy about telling you as much.

A year on, Microsoft is ready to end the free period, but isn't sure that you've been paying attention to the daily invitation to upgrade. They did mention it was free, right?

In one final push before the free upgrade window closes, in an effort to close in on the 1bn Windows 10 user target, Microsoft has now started providing its obstinate Windows 7 and 8 refusers fullscreen adverts begging them to upgrade.

This is very much the software equivalent of throwing your goalkeeper up for a corner in the 93rd minute when you're 1-0 down.

This is what the full screen advert looks like, if you've not already been shown it: 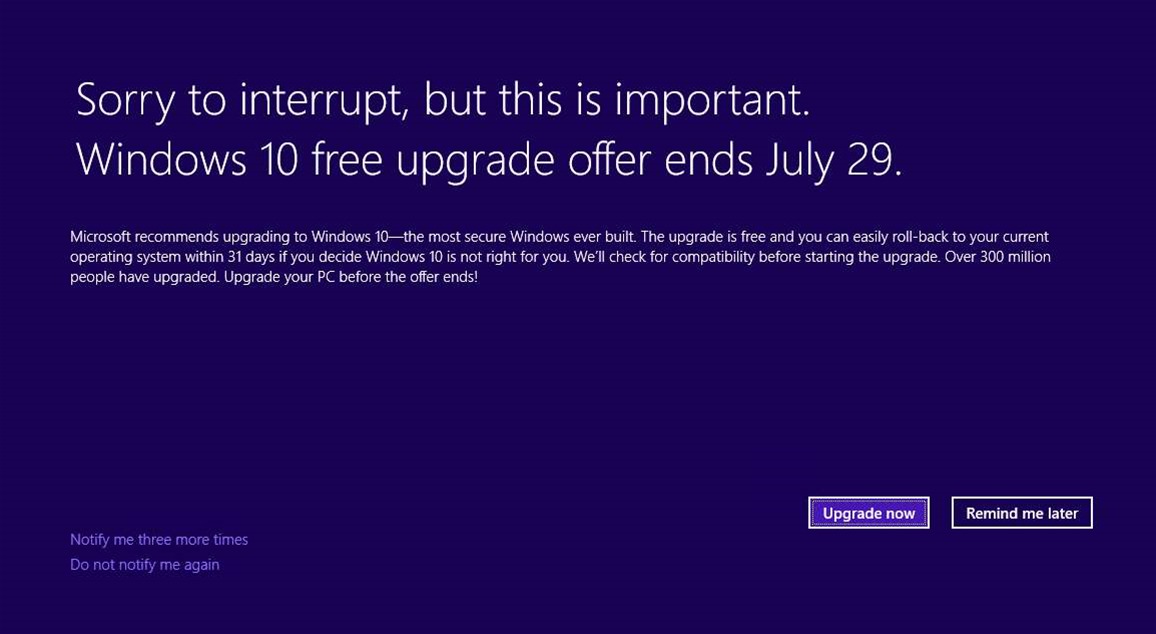 While it's possible that early on users could miss the gentle whispers that upgrading was a good idea, Microsoft has become increasingly loud as time has passed, and it's been pretty hard to miss for months now.

It has kind of worked. According to Net Analytics, Windows 10 market share has gone from 0.39 percent last July (which is understandable when it only launched on the 29th) to 19.14 percent today.

The trouble is that Windows 7, a seven year old operating system, is still the top dog with 49.05 percent. While that has shrunk from 60.73 percent in the same period, Net Analytics has reported a mini resurgence for the elderly OS. In April it was on 47.82 percent, in May it was 48.57 percent and today - as mentioned - it's 49.05 percent. That's a trend Microsoft won't be happy to see.

More concerning for everyone is that Windows XP still takes a 9.78 percent slice of the pie, and that will be celebrating its 15th birthday in August. The security risks that poses - especially when many of the companies that still use it are in the public sector - are worrying to say the least.