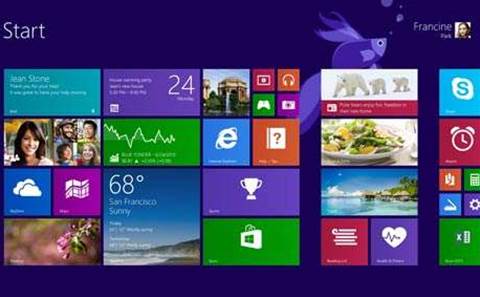 Windows 8 has been on a summer growth spurt, according to the latest figures from Net Applications, although the figures may not be as encouraging for Microsoft as they first appear.

The Net Applications figures show Windows 8 increasing its market share from 5.4% in July to 7.4% in August, by far the biggest jump since the operating system arrived on the market almost a year ago.

Windows 8's success comes at the expense of the ageing Windows XP, which falls from 37.1% in July to 33.7% in August, while Windows 7 also shows a small uplift.

However, the sudden swings can perhaps be explained by Net Applications' methodology, which collects data from visitors to more than 40,000 websites.

The surge could merely be a result of employees - who are more likely to be running Windows XP in offices than home users - taking holidays in the summer months. With a greater percentage of website visits coming from home users, Windows 8's sudden uplift could merely be a short-term seasonal boost, although we'll have to wait for next month's figures for confirmation.

Grab the MSP security opportunity
By Barry Collins
Sep 3 2013
8:09AM