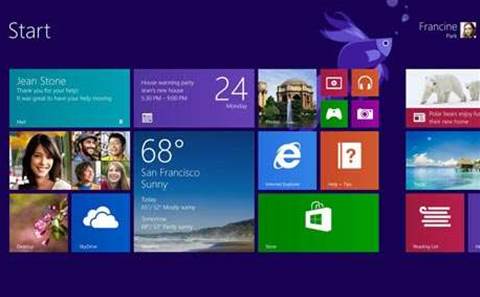 Microsoft's Windows 8.1 will be offered as a free update to current Windows 8 users, but customers will also have the option of running clean installs from older versions.

Microsoft had only offered Windows 8 as "upgrade-version" software, meaning it could only be installed on PCs running a previous version of Windows.

For Windows 8.1, Microsoft will sell "full-version software" to users who want to run a clean install. Windows 7 customers will be able to upgrade using an online download, while those with a clean hard drive, Windows XP or Windows Vista will need to buy the DVD.

It appears Microsoft has reinstated the full-version option in response to complaints.

"This shift allows more flexibility for customers in specific technical scenarios and is in response to feedback we've received," said Microsoft. "It will be easier for those consumers who want to build PCs from scratch, run Windows 8.1 in virtual machine (VM) environments, or run Windows 8.1 on a second hard drive partition."

Those on Windows 8 who want to update to the professional version of the new release can buy the Windows 8.1 Pro upgrade for $100, which includes Windows Media Center and additional enterprise features.

Local Australian pricing is not been disclosed yet. Microsoft hasn't responded to a request for comment.

It wasn't immediately clear whether the full-version DVDs will be available in stores on the 17 October launch date.

Anyone using the online download to upgrade from Windows 7 will be able to keep their files in place, but not their applications. Users doing a clean install or upgrading from XP or Vista will need to back up their files as well as reinstall their apps and settings.

Microsoft also announced that it's making the Enterprise RTM edition of Windows 8.1 available to TechNet and MSDN subscribers ahead of launch on 18 October. Volume Licensing customers with a Software Assurance agreement will get early access to the RTM build, since they get a TechNet subscription as part of the package.

"We encourage you to evaluate Windows 8.1 RTM bits to get a jump start on your deployment planning, using it with the new deployment tools that are already available to create a fully functional model of the deployment processes that you will use once Windows 8.1 Enterprise is generally available on 18 October," said Windows division senior director Erwin Vissen.