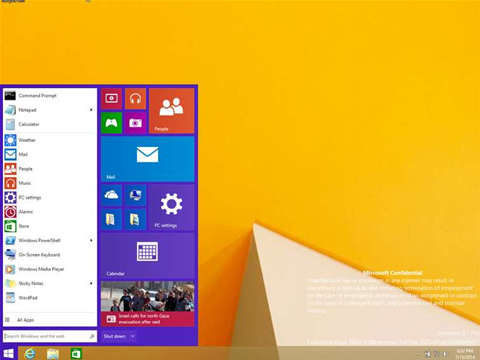 The revived Start Menu for Windows 8.1 has allegedly leaked in a screenshot posted online.

The revamped interface incorporates the now-familiar Windows 8 Start Screen into the right-hand side of the menu, with the more traditional list of apps shown on the left-hand side.

The user interface, which had been a fixture of Microsoft's operating system since Windows 95, was ditched for Windows 8 - irritating many users.

At Microsoft's Build conference in April, Terry Myerson, executive VP of the Operating Systems group, promised the return of the Start Menu in the next update of Windows.

At the time, he flashed up a quick image of what the Start Menu would look like, which was captured by Ars Technica.

While PC Pro is unable to verify the veracity of today's leak, it is largely inline with what was shown in April.

Whereas Myerson's image showed the both elements to be roughly equal in size, the new image shows a wider Modern UI-style section compared to the traditional Start Menu section.

If the leaked image is genuine, this could hint at the possibility of a customisable menu, similar to what is already available on the Windows 8, Windows RT and Windows Phone Start Screens.

However, users will likely have to wait until 2015 to get their hands on the new version of the old menu, when Microsoft is expected to roll out a major Windows update.