Windows Phone 7 available across a spread of channels 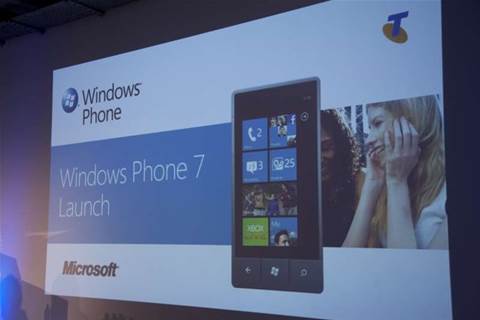 Microsoft today made its pitch for the two-thirds of mobile users yet to choose a smartphone, with the unveiling of its Windows Phone 7 in Sydney.

Part of a global launch that started overnight, Windows Phone 7 is the software giant's latest tilt at phone users who need access to email and advanced multimedia. Surrounded by a telco and handset partners, Microsoft executives sketched out a future where phone owners will seamlessly traverse a landscape of business and pleasure.

Backing Microsoft were Telstra and device makers HTC, Samsung and LG showing off handsets that will come to the major 3G networks including Vodafone and Optus before Christmas.

Some will be bundled with netbooks or Microsoft Xbox games systems, further highlighting Microsoft's strategy.

And phones will be available from a variety of channels from telco company stores to premium resellers and mass-merchants such as Harvey Norman, although device makers were still etching out the details.

Telstra chief marketing officer Kate McKenzie said about a third of handsets on its Next G network were smartphones - although she predicted this would lift to half by the end of the financial year. It's that group of new users and those reaching the end of their two-year contracts with other handsets that Microsoft hopes to snare, the vendor's executives said.

Telstra's stake in the ground revolved around tight integration with its Foxtel and BigPond services, although devices running Windows Phone 7 would not be locked to the carrier and content on its home screen "will have to earn its place", McKenzie said.

Windows Phone 7 users on the Telstra network will, for instance, be able to control and monitor their Foxtel iQ set-top boxes on the road.

"This is a time when you see the superiority of our network is really counting for a lot," McKenzie said.

Telstra users will be able to buy credit to download services from the online app store or "hub" using Microsoft credits, a credit card or have the purchase appear on their phone bill.

Business users will see tighter integration with Exchange and 35 social media services such as LinkedIn, continuing a trend seen in the latest desktop and cloud versions of the popular email platform. Executives demonstrated how LinkedIn profiles appeared alongside contact information and how Facebook updates could be followed and made from an integrated user interface on the phone.

Windows Phone 7 devices share many multi-touch features with other smartphone devices from Apple and those running Google's Android operating system such as pinching and zooming to manipulate images and text. It breaks from tradition by using tiles as shortcuts to "pin" (in Microsoft parlance) user data such as contacts, photos and commonly accessed information on the top screen.

"A lot of people are distracted by doing even relatively simple tasks on their phones," said Microsoft Australia mobile communications director Sheau-Lan Reed.

"Common tasks still take too many steps forcing people to do the work that software should be doing."

7 steps to MSP success: from pricing to specialisation
By Nate Cochrane
Oct 12 2010
1:50PM