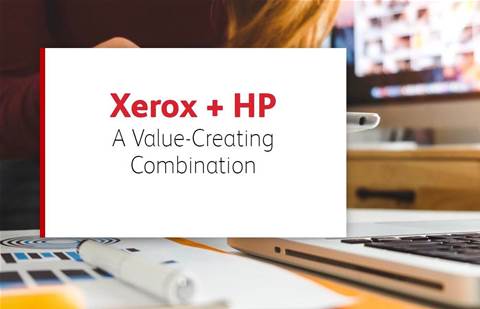 The cover page of Xerox's presentation to HP Inc. shareholders.

Xerox CEO John Visentin has delivered his latest pitch directly to HP shareholders, outlining the ways a combination of the two companies could create a US$66.8 billion print juggernaut with a legacy that surpasses the financial benefits.

“The value of the transaction goes beyond economics. In consolidating industries, first movers not only win but also have an opportunity to reshape the competitive landscape in an enduring way,” Visentin wrote in the letter addressed to HP shareholders. “The increased cash flow generated by this deal will allow for rapid de-leveraging, greater capital returns to shareholders and enhanced investment in innovation that can put these storied brands at the forefront for decades to come.”

Inside the 33-page presentation (pdf) titled “HP + Xerox A Value-Creating Combination,” Xerox for the first time outlined how it would achieve $2 billion in synergies from the new enterprise – one of the concerns that HP’s board and CEO communicated in a letter to Xerox.

Visentin said Xerox will start by reducing the number of suppliers from more than 10,000 to fewer than 3,000. It includes reducing IT costs from two percent of revenue to 1.5 percent of revenue, modernizing the supply chain to better manage SKUs, reducing office space, developing a plan to retain key talent and “address low performers” and eliminating duplicative operations, and delivery systems.

“By harvesting these synergies, which can only be realized with this combination, the new pro forma company will be both more profitable and better positioned to provide customers with a stronger mix of products, services and support than either company can do on its own,” Visentin wrote. “For those asking ‘Why now?’ We say ‘Why wait?’”

This latest document comes a week after Xerox majority shareholder Carl Icahn penned a letter to HP shareholders that also promoted the benefits of the deal and comes two weeks after HP fired a broadside at Xerox, calling out its earnings misses, questioning the math behind its synergy and revenue estimates, and accusing the copier king of holding up due diligence.

The presentation takes a slightly different look at the value of Xerox’s buyout of HP by claiming that the offer is closer to $31 a share if they include the worth of the newly combined company.

“We are offering a combination of cash and stock with an aggregate implied value of ~$31 per share (an 82% premium to HP’s unaffected 30-day volume weighted average price comprised of the following components: $17 per share in cash, which equals 100% of HP’s unaffected 30-day volume weighted average price, and 48% of the pro forma combined company, which we believe is worth ~$14 per share, without multiple expansion or revenue synergies,” Xerox wrote.

Xerox says together the two companies fill the voids in each other’s market reach, with Xerox capturing the top spot in the production press arena, and HP the hands-down winner in the home and SMB spaces.

Xerox said its strong direct sales engine complements channel-focused route to market, offering an opportunity for both to grow.

“Our complementary hardware, software and service offerings paired with our complementary routes-to-market provide the combined company with an opportunity to increase its total addressable market,” the presentation reads. “Specifically, each can cross-sell one another's technology into its existing install base and drive incremental revenue, all while eliminating duplicative SG&A costs.”

Xerox said HP is the missing piece of its “Office-As-A-Service” product which it plans to use to compete in the $376 billion market of of managed IT services by offering HP’s PCs and the reach of HP’s worldwide Device-as-a-Service offering.

“Few SMBs have the financial resources or ongoing need to have a full-time CIO,” Xerox wrote. “Xerox’s Office-as-a-Service solves for this challenge. The combined company can provide HP’s install base and Xerox’s SMB clients a complete and more compelling offering.”

Xerox also featured a page that showed a number of its executive leaders have spent years at HP, and working with HP, including President of the Americas Mike Feldman, Chief Delivery Officer Mary McHugh, and Chief Technology Officer Naresh Shanker.

“This is a compelling proposal that immediately increases the value of your investment in HP and achieves long overdue industry consolidation that spurs efficiencies of scale and growth,” the presentation reads.

Grabbing the hybrid cloud opportunity with Lenovo and Azure Services
By O’Ryan Johnson
Dec 10 2019
8:32AM