ZTE proposed a US$10.7 billion financing plan, nominates eight board members as part of overhaul 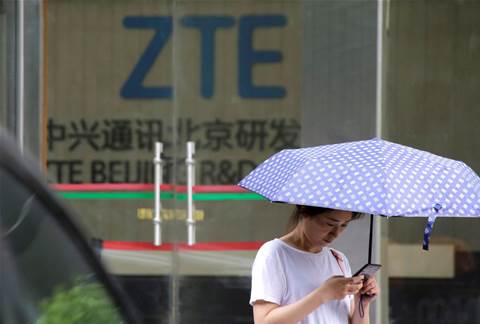 Chinese telecommunications giant ZTE has proposed a $10.7 billion financing plan and nominated eight board members in a drastic management overhaul, as it seeks to rebuild a business crippled by a US supplier ban.

The news, announced late on Wednesday, indicates China's No. 2 telecom equipment maker is working towards meeting conditions laid out by the United States so it could resume business with American suppliers, who provide about 25-30 percent of the components used in ZTE's equipment.

Investors cheered the development, driving up ZTE's Hong Kong-listed shares as much as 3.7 percent on Thursday morning.

A day earlier, embattled ZTE's shares plunged a record 41 percent in Hong Kong and 10 percent in Shenzhen, wiping almost US$3 billion off its market value, as it resumed trading after being suspended for almost two months due to the U.S. ban.

The United States imposed the seven-year supplier ban on ZTE in April after it broke an agreement to discipline executives who conspired to evade U.S. sanctions on Iran and North Korea.

ZTE last week agreed to pay a US$1 billion fine to the US government. The ban will, however, not be lifted until ZTE pays the fine and places another $400 million in an escrow account in a US-approved bank for 10 years.

ZTE was also ordered to radically overhaul its management and hire a U.S.-appointed special compliance coordinator.

As part of its deal with the United States, ZTE needs to replace its 14-person board and fire all leadership members at or above the senior vice president level, along with any executives or officers tied to the wrongdoing. The US commerce department can exercise discretion in granting exceptions.

In filings late on Wednesday, ZTE said its controlling shareholder, Zhongxingxin, had nominated 8 new board members.

That included 5 non-independent directors - Li Zixue, Li Buqing, Gu Junying, Zhu Weimin, and Fang Rong - all from state-linked firms that are shareholders of or have investment relationships with Zhongxingxin.

Zhongxingxin has a 30.34 percent stake in ZTE.

Voting on this will take place at an AGM on June 29.

According to a Reuters estimate based on company filings and a source with knowledge of the matter, ZTE's management overhaul could result in about 40 senior executives being replaced.

The company can find most candidates internally, Jefferies analyst Edison Lee said. "That is feasible, though it will of course cause confusion and slow down decision-making."

ZTE also proposed to amend a company statute at the AGM to remove a clause that required the chairman to be elected from directors or members of the senior officers of the company who had served for three years or more.

In addition, ZTE proposed to allow the board to apply for a $10.7 billion credit line, including a 30 billion yuan (US$4.69 billion) from Bank of China and US$6 billion from China Development Bank.

The Hong Kong-listed ZTE stock gave up early gains to trade almost flat at around HK$14.90 (US$1.90) by 0757 GMT, in a broader market that was down more than a percent.