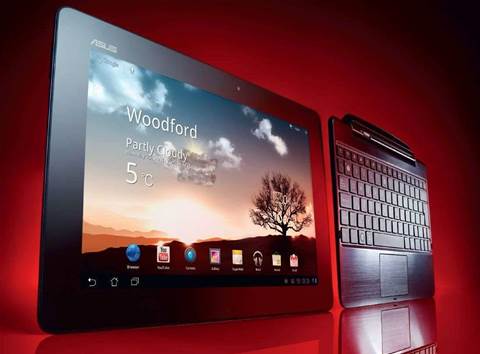 Android tablets have come a long way since the days of bodged smartphone OSes and horrid resistive screens, but there hasn’t been much development since the first Honeycomb tablets hit the shelves in spring 2011.

That’s about to change, however, with the new Asus Eee Pad Transformer Prime. This is the follow up to the original Transformer, and is a huge improvement on its design. Gone is the cheap plasticky finish of the original, to be replaced by a much slimmer, sexier body. The new Transformer bears the same “spun” aluminium finish as the firm’s sleek Zenbooks, and it looks and feels lovely.

It’s as thin as the market leaders, and very light with it too: the tablet on its own weighs 594g. Physically, the new Transformer cedes no ground to its competitors; which you choose will come down to personal taste. Of course, half the point of buying the Transformer is its ingenious keyboard dock, a feature you’ll find nowhere else. It has also had a redesign to match the tablet, with keys that have less travel and a firmer base.

The Transformer Prime’s ingenious keyboard docksets it apart from other tablets.

The dock mechanism feels solid and long lasting, engaging with a positive click and moving with a smooth, cultured hinge action. Combine that with its booster battery and a USB port to connect input peripherals or USB thumb drives (we tested both NTFS-and FAT32-formatted sticks and both allowed us to read and write files), and you have a strong package.

Handsome although the Prime undoubtedly is, the main attraction is what’s under the hood. This tablet is the first to feature the new generation of tablet processors – Nvidia’s Tegra 3 – which brings a number of significant advancements over the dual-core Tegra 2.

The headline figure is clearly the quad-core 1.3GHz processing power, but that doesn’t reveal the full story. Technically Tegra 3 has five cores – and it’s the fifth core that really makes the difference.

Nvidia calls this the “companion” core. It’s low power – running at only 500MHz – and the Transformer uses it most of the time. While in standby, syncing emails and messages, running low-intensity background tasks and reading web pages, it’s the companion core doing all the work. It can even deal with local video playback once the initial load has taken place.

The only time those four 1.3GHz cores fire up is during high-intensity tasks such as gaming and HD video streaming, launching apps and loading web pages. The rest of the time, they’re idle, allowing the companion core to get on with the majority of the work.

Additionally, Asus puts control over clock speed under user control: “Balanced” and “Battery Saver” modes allow you to manually turn down the wick on the processor, while a “Super IPS+” switch encourages you to use the brightest screen setting only in fierce sunlight.

The idea is to provide power at the same time as long battery life, so it was with interest that we embarked upon our battery test. This involves (with the screen brightness set to medium) looping a low-resolution podcast video until the battery runs flat, timing how long it takes.

The Prime has a much slimmer, sexier body than the original, rather plasticky Transformer

The first test, on the tablet portion only, and with the software setting pushed to its highest (Normal) setting, saw the tablet last a slightly disappointing 6hrs 50mins – somewhat down on the manufacturer’s claimed 12 hours, and far short of the iPad 2.

All in all it’s remarkable performance, especially with the extra power on tap.

The performance part of the equation is more difficult to gauge. In theory the Transformer Prime’s Tegra 3 has all-comers beaten, but in benchmarks the advantage wasn’t clear-cut.

It started by blitzing the SunSpider test with a time of 1.7seconds. That’s faster than any other device we’ve come across, but it doesn’t win by a huge margin. The iPad 2 managed 2.1 seconds and the Samsung Galaxy Tab 10.1 a little behind this.

In real-world usage, the benefits are equally unclear. When flicking between Android desktops and menus, this is by far the smoothest and most responsive tablet to date. Panning around web pages and scrolling up and down, however, reveals a slight hesitancy. The lack of responsiveness is noticeable when you compare the device side by side with an iPad 2.

The Tegra 3 shows its grunt in embedded high-resolution video streaming. On the YouTube desktop site, for instance, 1080p version of the Big Buck Bunny clip played smoothly; it stuttered badly on dual-core tablets.

The Prime is similar in design to Asus’ Zenbook Ultrabooks.

However, we suspect the full benefit of Tegra 3 will only become apparent when games optimised for the new chip begin to appear in larger numbers. First-person-shooter Shadowgun is one of the early examples, showing slightly improved textures on the Prime over the Motorola Xoom, although gameplay was smooth on both.

The screen and camera

The final piece of the jigsaw is the display, which is simply stunning. Asus uses similar IPS technology to Apple, and it’s gorgeous. Maximum brightness is superb at 584cd/m2 – the highest we’ve measured on any tablet.

Colours leap out with superb vibrancy – at least on a par with the iPad 2 and the Samsung Galaxy Tab 10.1 – and although the glossy screen picks up fingerprints at an alarming rate, the extra brightness means it’s pretty readable, even in bright outdoor conditions.

The 8-megapixel camera on the rear of the Prime, meanwhile, has the beating of every other tablet on the market both in terms of stills and 1080p video. In good light pictures are crisp, colourful, and boast good detail.

If we’re honest, Tegra 3 came as a little bit of a disappointment. We had been hoping for iPad-beating levels of responsiveness, smoothness and battery life. The Prime doesn’t quite offer that, and although the new chip does boost HD video and the potential for high-end gaming, the companion core setup seems to compromise some aspects of performance.

However, the rest of the package is much more likeable. It’s an improvement over the original in most respects (and most other Android tablets), with better battery life, a superb screen, a good camera and much slicker design.

It’s good value, too. The 32GB Wi-Fi keyboard and tablet bundle is $799; the 64GB Galaxy Tab 10.1 is the same price. Having the keyboard dock included more than makes up for the difference in memory size..

So the Prime isn’t perfect, but it does edge in front of the Galaxy Tab 10.1 on value, connectivity and all-round performance. It’s our new favourite Android tablet – and a hint of things to come.

Cloud application revenue made easy
By Jonathan Bray
Mar 12 2012
8:29AM