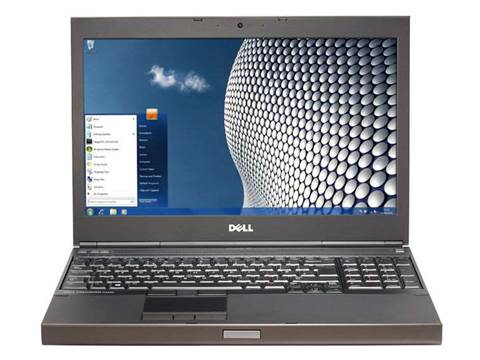 High-DPI displays are the flavour of the moment, but the Dell Precision M4800 marks the first time we’ve seen such a screen on a business-class machine. That isn’t this monster of a workstation laptop’s only talent though. Not only is its 15.6in panel super crisp, at 3,200 x 1,800, it’s also one of the finest-quality displays we’ve tested.

Put to the test with our X-Rite colorimeter, it delivered a superb maximum brightness of 344cd/m2 and a fine contrast ratio of 820:1. Colour reproduction is superb, as you might expect of a screen aimed at professional designers, architects, videographers and engineers. It’s capable of reproducing the full sRGB colour gamut, and is magnificently accurate with an average Delta E of 1.7 and a maximum of 3.5.

It’s a glorious display, suitable for everything from professional photo editing and magazine layout, to 3D design and high-end video production. Coupled with a matte, anti-glare coating, it’s readable in most conditions, too.

The one caveat to all this is that – although Windows itself works fine – most applications have yet to be optimised for high-DPI displays. The result is either tiny, unreadable text in menus and dropdowns, or blurry icons and pixellated text as elements are scaled up. Some applications, such as Sony Vegas Pro, deliver the worst of both worlds, scaling some elements up too much and leaving others absolutely miniscule. We’d prefer a 1,920 x 1,200 display in most situations, but, disappointingly, the only other resolution on offer in the Precision range is Full HD.

Dell hasn’t changed much about the chassis since the last time we saw one of its Precision workstations. It remains an absolute tank of a laptop, weighing 3.2kg without its charger – and a hernia-inducing 4.1kg with it. It feels built to last, though, clad entirely in thick, rigid-feeling anodised aluminium, and there’s plenty else to like.

The keyboard is superbly comfortable, and is good enough to rival the best desktop models. Its soft, cushioned key action is a pleasure to use, and the size of the chassis means there’s room for a number pad to the right. There’s a trackpoint to supplement the small touchpad, and both work flawlessly. It’s nice to see separate buttons for both. We’ve yet to come across a buttonless touchpad that can match the comfort of an arrangement such as this.

As you might expect of a laptop designed to sit on a desk for most of its life, there’s a phalanx of sockets and ports: the left edge of the Precision M4800 hosts a pair of USB 3 ports, separate 3.5mm headphone and microphone jacks, and SDXC, ExpressCard/54 and smart-card slots. The right-hand edge is a little less crowded, but there’s still room enough for another pair of USB 3 ports and a full-sized DisplayPort video output. At the rear are HDMI and VGA video outputs, a combined eSATA/USB 2 socket and Gigabit Ethernet.

And there’s plenty of room for internal upgrades as well. Our review model came fully stacked with 16GB of RAM, which occupies the two slots under the bottom panel. There’s another pair of DIMM slots beneath the keyboard, allowing expansion up to 32GB, and the hard disk, battery and wireless card aren’t tough to replace either.

Not that you’ll want to change anything right away: this laptop is rammed full of top-spec hardware. The processor is Intel’s fastest current mobile part, a quad-core Core i7-4900MQ, which runs at a nominal clock speed of 2.8GHz and Turbo Boosts up to 3.8GHz, and boasts 8MB of L3 cache with an L2 cache of 256KB per core. As mentioned previously, there’s 16GB of RAM, while graphics are catered for by one of Nvidia’s ISV-certified Quadro K2100M with 2GB of GDDR5. On the storage front, there’s a 256GB Samsung SM841 SSD and a slot-loading DVD writer. Rather frustratingly, it isn’t possible to specify more storage space in the top-spec SKU; you have to drop down to the Full HD model if you want 500GB, and it’s only a hybrid HDD, not a full blown SSD.

Just like the chassis, it’s a beefy line-up – and one that delivered a hugely impressive set of benchmark scores. In the PC Pro Real World Benchmarks, it achieved an overall mark of 1.01, which is faster than our quad-core reference desktop PC. It’s even more remarkable when you consider that the high resolution of the display held back the Windows-responsiveness element of our tests.

This powerful Quadro graphics setup also opens up the possibility of harnessing the GPU for compute-intensive tasks, such as 3D or video rendering. We put this to the test by running our standard video render on Sony Vegas Pro 12, with GPU acceleration turned on, and then with it turned off. It turns out that the card is no faster or slower than the CPU, completing the test in around 1min 56secs. The difference is that more CPU cycles are freed up when GPU acceleration is enabled, meaning you can carry on doing other things while your render is taking place.

The Precision’s weakest suit is, perhaps inevitably, battery life. Even with a huge 97Wh, nine-cell power pack under the hood, this powerhouse laptop only lasted 3hrs 28mins in our light-use test. This isn’t a machine you can take out on the road and expect to last a day away from mains power. Think of it more as a workhorse machine that’s best deployed in environments where a small amount of mobility is needed. A laptop to carry from desk to desk in a design studio, factory or warehouse environment, perhaps.

For those environments, though, the Precision M4800 is ideal, providing just the right blend of comfort, power, and portability. We’d hesitate to buy the 3,200 x 1,800 version purely because much of the Windows ecosystem isn’t high-DPI-ready yet, but there’s no denying this is a superbly crafted piece of hardware.