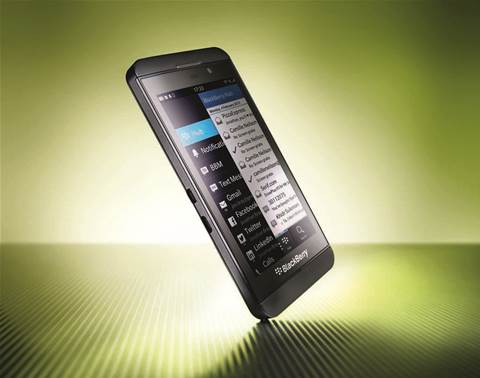 The BlackBerry Hub
These gestures sound simple, but they make the BlackBerry Z10 feel different to use than the average smartphone, and once we had the hang of them they felt just right. It’s also nice to have a phone that puts messaging at the heart of the OS for once.

The Hub is always a gesture away, whatever you happen to be doing, whether that’s using the up-then-right swipe, or a simple left-right swipe from the multitasking view. Once you’ve brought it up, the Hub works efficiently as a place for gathering all of your communications together.

The default view displays all messages in one stream, from SMS, BBM, email, Twitter and Facebook messages, to calls and even phone notifications. If all that’s too much, you can quickly narrow it down: a swipe in from the left edge of the screen brings up a list of inboxes, allowing quick filtering by message type. It’s also possible to search and compose any message type here.

Phone calls, texting and BBM
As a messaging phone, the BlackBerry Z10 is the very model of efficiency, and this is carried across to the phone, texting, and message-composition features. As with the Hub, you can quickly access the phone app from anywhere; all it takes is a swipe to get you back to the multitasking screen and a single tap. The phone button is always there, in the bottom-left corner.

In the phone app, you can’t use the number pad to search contacts and it won’t suggest numbers as you type. However, the contact search is very quick indeed. You can also forego the phone app entirely by using the universal search function: hit the search key on the multitasking screen, and contact matches appear up top, just below apps. It’s then possible to initiate calls or texts with a single tap.

Call quality is exemplary – voices came through crystal clear at both ends in testing – and there’s even a note-taking tool on the in-call screen for jotting stuff down as you go. As has become customary, text messaging is threaded, and it’s simple to forward messages and copy and paste between apps.

Elsewhere, a couple of key new features have been added to BBM, so it’s now possible not only to have text conversations and make voice calls, but also to initiate video calls and share your screen. These work best over a decent Wi-Fi or 4G connection; images looked smeary and unpleasant over 3G connections.

It’s the keyboard that’s the most important aspect of the Z10’s messaging element, however. It’s what BlackBerry made most fuss over at the launch, and it’s certainly very different to anything we’ve tried before. You can see exactly how it works in the walkthrough above, and there’s no doubt the prediction is impressive. Alas, there are problems. The first is the font used for the suggestions themselves: it’s far too small and subtly coloured. You may fail to notice the suggestions are there at first, and we expect some wearers of glasses to have difficulty reading them. We can’t imagine how developers didn’t think this would be an issue.

The second is that, to keep scanning for these suggestions, your eyes have to be in far too many places at once: as with other word-prediction systems, you have to look at the keyboard when typing, glancing up to make sure you’ve typed the letter correctly; here, however, you also have to keep scanning between the keys. In some situations, we found this actually slowed down typing instead of speeding it up. Another fault is the letters on the keys themselves don’t change case as you hit the Shift key. There’s no typing lag, however.

BlackBerry also made great play of BlackBerry Balance at launch, a feature that makes it possible to effectively split the Z10 in two and give your IT department control of one half while you keep personal content on the other. This isn’t new – it first appeared in 2011 – but it’s certainly useful, enabling IT departments to prevent personal apps from accessing data in the corporate half. It also allows IT departments to remote-wipe corporate data and apps without affecting the rest of the device – a potential plus for companies considering implementing a BYOD policy.

Apps and other content
The big question when any new platform touches down, however, is “how good are the apps?”. It would be unfair to expect the breadth of iOS and Android, but BlackBerry World’s count of 70,000-plus at launch is promising. It’s certainly much more positive than Windows Phone was at launch, and it isn’t too hard to track down entertaining games and useful apps to purchase and install.

We were pleased to see apps like Splashtop remote, Angry Birds Star Wars and World of Goo ready to go, and there are plenty of big names on the list of firms BlackBerry says are “committed” to developing for the platform. These include (but aren’t limited to) eBay, Amazon (Kindle app), Skype and Spotify. Even without these, though, it’s a good effort from BlackBerry. There’s also a solid selection of apps pre-loaded, including Facebook, Twitter, YouTube, Foursquare and calculator and compass apps, plus Documents To Go for creating and editing office documents. The maps app has turn-by-turn driving instructions, but it’s nowhere near as slick as Google Maps.

Verdict
Aside from performance niggles, then, the new wave of BlackBerry smartphones is off to a flying start with the BlackBerry Z10. For a new smartphone on a first-generation platform it feels remarkably mature, with an exceptionally well-thought-out interface that aims to provide something different – and largely succeeds.

There’s a decent selection of apps in the BlackBerry World store, the screen is exceptional and the camera isn’t that bad at all. Even the pricing isn’t overly avaricious: online slipups put it at around $750 outright, about expected for a high end smartphone.

The BlackBerry Z10 marks a confident and encouraging return to form in BlackBerry’s bid to catch up with Android, iOS and Windows Phone. It isn’t quite good enough to compete for overall honours just yet, but it’s a big step in the right direction.