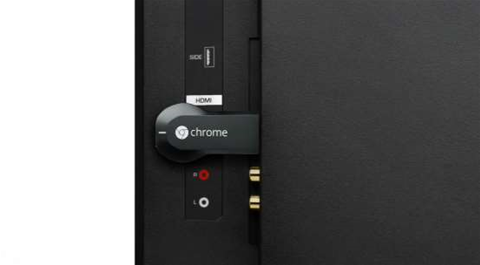 Costing just US$35, it’s not a box that sits under your TV, but a dongle that plugs into the back of it, into a spare HDMI port. It then allows you to wirelessly sling – or “cast” – videos and web pages from your phone, tablet or computer to the big screen. Although, unlike with Apple TV, they're not actually cast from your gadget, but via the Chromecast's own web connection, in the interests of improving quality.

I’ve just got my mitts on a Chromecast to try at home. Read on to find out what I made of Google’s tiny TV smartener.

What's in the box?
The Chromecast box is small and simple (very Apple-esque, in fact) and inside you’ll find the dongle itself, a USB power cable, power adapter and an optional HDMI adapter cable, for use if you don’t have enough space between the wall and your TV to accommodate the sticky-outiness of the Chromecast.

A USB power cable, you cry? Yes, unfortunately the Chromecast can’t draw power from HDMI (it may be able to with certain HDMI v1.4 TVs, but Google isn’t clear on this), so you need to use this extra cable to either plug it into a USB port on your TV or a standard power socket. It makes the whole thing considerably more messy than it might initially appear, but once it’s all hooked up you’ll probably forget about it. I did.

Setting it up
Once the Chromecast is plugged into your TV and power, it’ll display a setup screen and create its own Wi-Fi network. Using a smartphone, tablet or computer you then connect directly to this in order to hook the Chromecast up to your home’s Wi-Fi. And that is pretty much it – you’re ready to start casting stuff from your devices to your TV.

It outputs video in up to 1080p HD. You can cast from mobile devices running Android 2.3 and iOS 6 and above, or computers running Chrome OS, or Windows 7 and Mac OS 10.7 and above. These just have to be connected to the same Wi-Fi network as the Chromecast dongle. To cast, you tap or click on the “Cast” icon, which will appear next to compatible content; the video or web page then pops up on your TV screen within a second or two, and you can control it (playback, scrolling etc.) via the device from which you’re casting.

What's it good at?
The Chromecast’s video playback is currently its best aspect. Netflix videos look superbly sharp on the bigger screen, and controlling them using your phone, tablet or laptop as a remote works fairly well – I found there was a slight delay, but it never became irritating. On Netflix, I watched a variety of shows and films – Luther, Orange Is The New Black, The Tudors, Cabin In The Woods, Freaks and Geeks – and found all of them to be as good as if they were being broadcast on TV the "normal" way, or played from a DVD. Quality is HD where available, but don't expect Blu-ray-rivalling crispness – this is a notch or two below.

YouTube videos can look a bit blurry and compressed on the big screen, but that’s the fault of the source video, not Chromecast. Higher quality videos looked absolutely fine, and again can be easily controlled using the casting device. As with Netflix, HD can be displayed if the source video allows it. One nice aspect of YouTube casting is that, once you’ve hit the button, your device will keep casting whichever videos you choose until you hit it to turn the function off. That means you can sit around with a few friends and watch a series of videos without having to keep tapping the cast button every time you pick a new one.

The Marvell Armada 1500 chip at the Chromecast's heart is clearly powerful enough to provide slick playback of demanding video, and supports most modern video codecs and even DTS-HD surround audio – so there's headroom for the Chromecast to deliver moving pictures from pretty much any site you send its way.

What's it bad at?
As already mentioned, the Chrome tab casting feature is still in beta, and there’s definitely a little room for improvement here. There’s no cursor visible on the cast tab on your TV, so you still have to use your computer or mobile device as the primary screen. There’s also a noticeable delay between, say, scrolling on your laptop browser and the cast image scrolling down. So tab casting works, but it might not be something you find yourself using all that often.

You can, for instance, cast a tab including a Vimeo or iPlayer video to your TV and watch that video, but it’ll be slightly jerky, or the audio won't sync quite right. Hopefully Google is working on upgrading this experience now, as it could be a killer feature.

It's also worth noting that Chromecast is more limited than Apple TV, as it requires a companion device to function: without your phone, tablet or laptop, it's a waste of plastic.

Initial verdict?
After a day with Chromecast, I'm seriously impressed with its Netflix and YouTube performance – especially given the device’s size and price – and the ease with which it can be set up and used.

If you already have a way of getting these videos onto your TV, however, you may find that the dongle has little to offer you at this stage; its Chrome tab casting ability works well enough, but it doesn’t yet feel solid or reliable enough to be a “must use” feature.

It'll be interesting to see which other apps gain “casting” abilities in the coming months: with enough support, and with a Chrome tab casting fix, Chromecast could become a compelling little dongle – whether your TV's already smart or not.

Before you get too excited, I should remind you that the Chromecast is not currently available outside of the US. Hopefully it'll be here before too long, though.