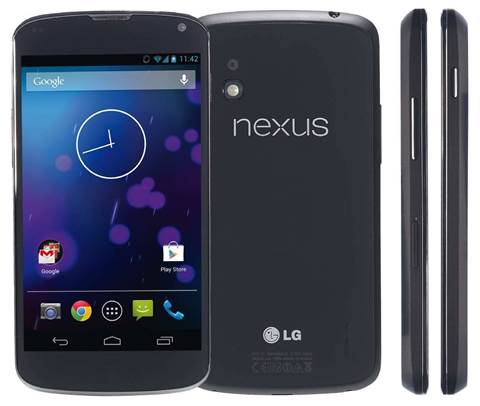 Google’s Nexus 4 smartphone attracted worldwide attention when it was first unveiled, selling out in a staggering 15 minutes. We’ve never seen a smartphone sell out so quickly, but there are good reasons why so many were so keen to get their hands on Google’s latest handset.
The 8GB and 16GB versions are available outright for only $349 and $399, which makes the Nexus 4 more affordable than every one of its flagship rivals, including the Samsung Galaxy S II and A-Listed HTC One X.

The software is a big draw, too; as with other Google-branded handsets, the Nexus 4 is loaded with the latest version of Android, and it will get future OS updates before other phones.
The version of Android in question is 4.2, and it boasts a number of enhancements over 4.1. To start with, the lockscreen is more versatile. You can swipe up to unlock the phone, but also swipe right to go to the camera app, or left to reveal six customisable and interactive lockscreens.

Notifications can now be acted on directly: single taps return missed calls, open the text-messaging and email apps, and accept Facebook friend requests. Swipe down with two fingers instead of one from the top of the screen and a quick settings menu opens, instead of the notification drawer. It’s a smart way of accessing commonly used options.

Google Now digs up more information than before, using email data to remind you about flights, restaurant reservations and local events or places of interest. The keyboard is new, boasting efficient, Swype-style gesture typing.

Thoughtful touches abound elsewhere. Triple-tapping activates a screen zoom feature. Instagram-style filters can be applied to pictures, with a finger-drag generating a before-and-after, split-field view. The camera app has been redesigned, with the settings listed in a circular menu, and the added ability to capture panorama-style 360-degree pictures.

It’s the best version of Android so far, and better still it’s running on a very attractive handset. Built by LG, the Nexus 4 is smart and understated, with a glass rear that shimmers beautifully in the right light and a classy Gorilla Glass front panel.

It’s well built, comfortable to hold, and at 9.1mm only marginally thicker than the 8.6mm Galaxy S III. It’s more attractive than the S III, but less practical: the battery can’t be replaced, and there’s no microSD slot. There’s no 4G version yet, either.

The Nexus 4 marks the smartphone debut of the Snapdragon S4 Pro CPU, and here this 1.5GHz, quad-core chip is partnered with an Adreno 320 graphics core and 2GB of RAM.

That’s a killer line-up, and in benchmarks it kept up with the Galaxy S III. It scored 2082 in Geekbench, surpassing the Samsung’s 1782, but took 1902ms to finish the SunSpider benchmark, slower than the Galaxy S III’s 1344ms. In real-world use that translates to smooth, responsive navigation and web browsing, while demanding games play flawlessly. Both phones finished our 24-hour battery test with 60% remaining, which is average for a smartphone of this ilk.

The IPS screen is a stunner, too. At 4.7in, it’s fractionally smaller than the Samsung’s 4.8in panel, but at 768 x 1280 it has a slightly higher resolution. It’s pin-sharp, and a measured maximum brightness of 486cd/m2 means it’s incandescent indoors and easily visible outside.

The Nexus 4’s single weakness is its 8-megapixel camera. It’s fine for taking standard snaps, and excellent when shooting close-ups, but the Samsung’s sensational shooter is better.
It’s a close-run thing between the Nexus 4 and the Samsung Galaxy S III, with the camera the only real area where the Samsung pulls ahead. When it comes to performance, build quality and screen, both phones are superb.

Which you choose depends on your priorities. If you’re keen on getting the latest, cleanest version of Android, or you’re a prepaid aficionado, plump for the Nexus 4. The $399 outright price for the 16GB model is a steal.

With most people buying on contract, though, the Samsung and HTC options are still a touch ahead. The One X remains our A-List choice by a whisker.

7 steps to MSP success: from pricing to specialisation
By Mike Jennings
Mar 15 2013
7:36AM