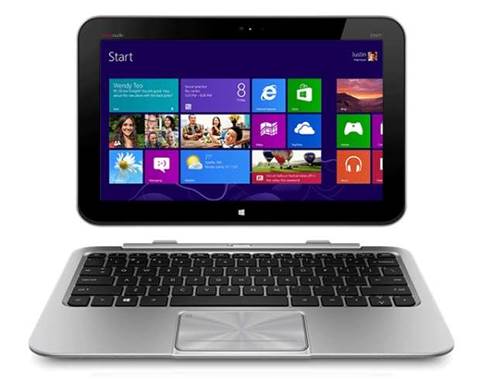 The Intel Atom brand tends to find itself attached to bargain-basement hardware – but HP’s Atom-based Envy x2 is an upmarket convertible. It runs full Windows 8, sports an 11.6in detachable touchscreen, and supports both desktop- and tablet-style apps.

In fact, at first glance, the Envy x2 looks like a premium Ultrabook. The robust aluminium chassis measures a slender 19mm thick, and inside a solid, spacious MacBook-style keyboard bespeaks the Envy x2’s suitability for serious work. The assembly feels a little heavy in the hand, but that’s a trick of its compact frame: in reality, the keyboard and screen together weigh an eminently portable 1.41kg. When detached, the tablet part comes in at only 710g – little more than the 652g of the fourth-generation iPad, despite the distinctly larger display area.

It seems quite nippy in use, despite its low-power architecture. Windows 8 is far more responsive on lightweight hardware than its predecessors, and the Atom Z2760 (codenamed Cloverview) is a step up from the netbook CPUs of yore. Full HD YouTube videos play without a hitch – and look great on the Envy x2’s 1366 x 768 IPS panel, with its 416cd/m² brightness and 849:1 contrast ratio. The compact speakers set into the bottom of the tablet/display aren’t exactly loud, but they’re clear and balanced enough for music and movies.

This isn’t a system we’d recommend for 3D gaming – or demanding desktop applications. An overall benchmark score of 0.21 confirms the Atom is nowhere near as powerful as even a budget Core i3. But for light media duties, everyday browsing and word processing, it’s fine.

The upside of the Atom is great battery life. In standalone tablet mode, the Envy x2 achieved 10hrs 19mins of full-screen video playback. That convincingly beats the nine hours achieved by the ARM-based Surface Windows RT and the 9hrs 45mins of the iPad – not bad for a full Windows 8 system. In our desktop-based light-use test, the Envy x2 scored an almost identical 10hrs 21mins. In its laptop-style configuration, it does even better, thanks to a second battery tucked away in the keyboard unit: in our battery test, the docked system achieved a terrific 20hrs 28mins of light use.

Inevitably, though, there are compromises. Although the hinge to which the screen attaches feels solid, it folds back to an angle of only around 125 degrees. The problem is undocking it: a small, fiddly switch at the centre of the hinge must be held to the left while you manhandle the screen up and off its hinges with your other hand.

Connectivity and storage options are disappointing. The full-sized HDMI port at the left of the keyboard is welcome, but the twin USB slots on the keyboard unit support only USB 2. The CPU supports a maximum of only 2GB of RAM, and, since the Envy x2 is sealed against upgrades, you’re stuck with a rather mean 64GB SSD (of which Windows 8 and HP’s recovery partition consume more than a third).Still, you do get an SD card reader on the keyboard and a microSD slot on the screen.

Factor in the low-power processor and, despite the Envy x2’s outward similarity to a high-end laptop, it ends up feeling like a regular tablet with an attachable keyboard.

But, at $950, the Envy x2 is simply too expensive to get away with it. For the same price you can buy the much more powerful ASUS Vivobook X202E touchscreen laptop and a Google Nexus 7 tablet for those times when you want one. Alternatively, you could wait for Microsoft’s 10.6in, Full HD, Core i5-powered Surface Windows Pro, which is expected to be priced similarly.

HP’s offering makes an agreeable platform for all-day lightweight computing – in both laptop and tablet guises – but when you weigh up your options, its capabilities are far too limited to justify the price.

Telecommunications Services
By Darien Graham-Smith
May 9 2013
11:21AM