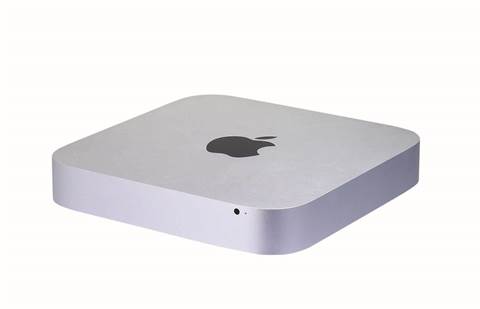 Apple hasn’t made any aesthetic changes to its latest Mac mini, but it didn’t need to – it’s still the best-looking small-form-factor PC on the market. Instead, all Apple’s attentions are on the inside, starting with Fusion Drive, the SSD and hard disk hybrid that debuted in the 21.5in iMac.

The configuration in our review Mac mini is the same as that PC. A 128GB SSD is used to store the OS and frequently used applications, while a 1TB hard disk is employed alongside it for less important apps and files. Over time the system learns which applications and files are used most often, moving them to the faster SSD, and shifting those that are rarely accessed back to the hard disk.

We’ve no way of testing it, unfortunately, since the system is entirely transparent and can’t be configured or turned off. What we can tell you is that the SSD is rapid: benchmarking with Xbench showed sequential read and write tests hitting 277MB/sec and 315MB/sec, not far behind the iMac’s drive, which scored 302MB/sec and 364MB/sec.

It’s worth noting, too, that the Fusion Drive system isn’t available to Boot Camp users running Windows. And if you plan on sticking with OS X, it’s a pricey upgrade, available for an extra $300 and then only on the most expensive model.

The other key hardware change sees Apple replace Sandy Bridge processors with 22nm Ivy Bridge technology. The Core i7-3720QM in our review model is a quad-core, 2.6GHz part, and it’s the more powerful of the two high-end chips available in this year’s Mac mini line-up – the other i7 is a 2.3GHz chip, with a cheaper Core i5 model to round things off. Our Mac mini scored an impressive 0.93 in our benchmarks, far ahead of the 0.72 scored by the Sandy Bridge Core i5 chip in last year’s machine.

Disappointingly, there’s no longer an option to specify the mini with a discrete GPU, as there was last year. Graphics grunt is instead supplied by an integrated Intel HD Graphics 4000 chip, which scored 57fps in our Low quality Crysis test, ruling out intensive, high-resolution gaming.

Elsewhere it’s business as usual for Apple’s mini marvel. The flat top, curved corners and familiar Apple logo look fantastic; as compact desktop PCs go, there aren’t any that look better.
Connectivity is comprehensive, with four USB ports at the rear, all upgraded to USB 3 this time around, HDMI and Thunderbolt display outputs, Gigabit Ethernet and FireWire sockets, an SD card reader and a pair of 3.5mm audio jacks, one of which doubles as an optical S/PDIF output. Underneath, a circular panel can be removed, revealing the mini’s two memory sockets. It will take up to 16GB of DDR3 RAM, although we’d counsel against upgrading at the point of sale – going from 4GB to 16GB adds a hefty $360 in the Apple Store.

At $1319, our Fusion Drive-equipped Core i7 review model is equally silly money, but Apple’s lowest-specification model is much better value. At $699, it costs less than last year’s base model, and its Core i5 processor is quicker and more efficient. For anyone after a small, capable desktop PC, there isn’t anything that comes close to packing as much power into as elegant a chassis as this. Plus, for anyone hankering after the OS X experience, it’s the cheapest way to get on board.