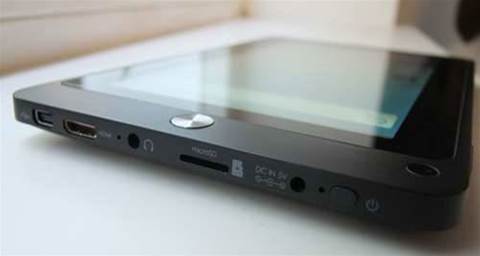 The Kogan Agora may not be the cheapest budget tablet around, but its feature count helps to justify its slightly higher price tag.

Build quality is surprisingly solid, but the hardware and Android 2.3 OS are mismatched. There should be Back, Home, Menu and Search buttons below the screen but instead you get an unmarked circular Back button, while what was clearly intended as a volume control has been reassigned to Home and Menu duties. That leaves no hardware volume controls, meaning you have to exit an app and restart it to change volume.

Unlike some bargain tablets, the Kogan has a capacitive rather than resistive screen, so it can handle multi-touch gestures. It’s not the most responsive though, and the display is poor: low resolution, lacking brightness with a drab colourcast and limited viewing angles. But ultimately it’s sufficient for handheld browsing, gaming and video playback.

The Kogan’s access to the Android Market is crucial, and not to be assumed at this level. Just browsing it is entertainment in itself, even if much of what you find is of questionable quality. If value is high on your list you’ll be pleased with the Android Market’s bias towards free apps, most of which will work fine on the Kogan.

A generous array of connections lets you hook up the tablet to a TV via HDMI for 720p playback, and there’s a microSD card slot for expanding the storage and shuffling files around. That’s more than you’d get on most high-end tablets. There’s a single, front-facing camera that takes pictures along with video that looks and sounds like undercover recordings.

Processing power is just about sufficient to keep things running at acceptable rates. Browsing benefits from decent Wi-Fi reception and Flash video support. Scrolling and zooming around pages can be sluggish but it’s certainly not the worst we’ve seen. Most games and apps work well enough and the iPlayer app just about keeps up.

The Kogan Agora 7in Tablet PC can only be purchased directly through Kogan. Click here to order.

7 steps to MSP success: from pricing to specialisation
By jools whitehorn
Oct 5 2011
1:11PM