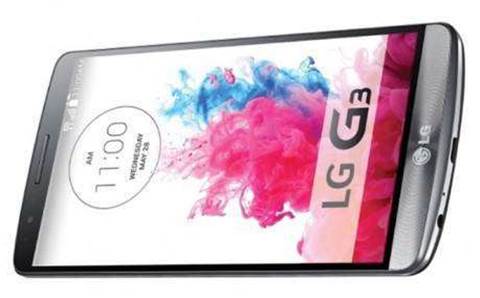 LG’s flagship smartphone, the LG G3, has finally landed. Packing a huge 5.5in Quad HD display and a host of upgrades over its predecessor, the G2, the LG G3 is gunning for the top-flight rivals from Samsung, HTC and Apple.

The big news is the new Quad HD display. LG’s done away with the 5.2in Full HD panel on the G2, and in its place now stands a gleaming 5.5in Quad HD, 2,560 x 1,440 panel. First impressions are of unearthly levels of detail, with the 538ppi IPS panel serving up luminous, saturated colours with pin-sharp detail, even when you literally press your nose to the screen.

Notably, though, the LG G3 squeezes in its larger 5.5in display into a chassis that measures 74.5mm wide – only 3.6mm wider than its predecessor, the G2. It’s a big phone, but it’s by no means unwieldy.

And apart from the distinctive rear keys on the rear of the G3, LG has clearly been busily sprucing up its new handset. A brushed metal rear arcs from edge to edge, and a sliver of flattened metal runs around the handset’s edge. The edges taper towards the front of the handset, and curve attractively around the corners.

Suffice to say, even compared to the prettiest Android flagships out there - for our money, the Sony Xperia Z2 and HTC One (M8) are the ones to beat - the LG G3 can hold its head up high. The matte finish feels great in the hand, and doesn’t suffer from the same fingerprint-snaffling qualities of glass-backed handsets. It’s also eerily light for a 5.5in phone, and yet feels tough and well-built.

Simplicity was a recurring theme in LG’s presentation of the G3, and while the LG G3 GUI has given Android 4.4.2 a new look and a variety of new features, it’s not been butchered to the point where it’s almost unrecognisable (yes, we’re pointing at you, Huawei).

Instead, LG has kept the emphasis on making useful tweaks to the Android interface. The clean, uncluttered home screen is familiar, but LG has subtly tailored the interface with simple, pastel-coloured shades, rounded icons, and a variety of nifty page-turn transitions which sees the home screens fold into one another, and apps which pirouette into the background.

The on-screen keyboard has had more than a few tweaks, too; enough that LG has dubbed it the Smart Keyboard. The keyboard panel can be resized with a quick drag of the finger, while holding the space bar lets you swipe back and forth through the typed text. Meanwhile, selecting appropriate autocorrect word suggestions is as easy as swiping a finger upwards towards the desired word.

Like most of the big smartphone launches of late, LG has pushed security features to the forefront. Knock Code makes a reappearance, and unlike rival unlock screens which provide visual on-screen lock patterns, this segments the G3's blank screen into four quarters and allows you to unlock the phone with a sequence of fingertaps. The benefit of this is obvious: it doesn’t leave tell tale trails or finger presses on the screen, as you only need tap roughly in each of the screen's quarters.

Content lock is another security feature, and this makes it possible to secure photos, videos and personal files with 128-bit encryption. Even if files are visible when connected via a USB connection, it’s not possible to preview or download them without entering the unlock code. The final safety net is the Kill Switch functionality, which can remote wipe or permanently disable the handset in the event of it getting lost.

It comes as no surprise to find Qualcomm hardware powering the LG G3. It’s the same Qualcomm Snapdragon 801 CPU and Adreno 330 GPU pairing that we’ve seen on the front runners from HTC and Sony, but LG has joined Samsung in opting for the faster 2.5GHz version of the chip.

Unfortunately, though, due to the quirks of the Wi-Fi at LG’s event, we weren’t able to run any of our usual benchmarks. But as you’d expect for a high-end handset, there’s not a hint of judder when flicking between the handset’s menus and homescreens, and rather like Sony's Xperia Z2, LG has put the sheer power of the Qualcomm hardware to use by employing a variety of snazzy screen transitions and animations.

Behind that gorgeous metal rear, there’s still a 3,000mAh battery powering the whole show. That might sound a little worrying given the demands of the pixel-dense screen and the powerful components inside, but LG claims to have tamed the battery life issue by employing adaptive frame rate, clocking and timing controls for the Quad HD display. We'd be keen to see how those tweaks affect video playback and gaming performance in our usual set of battery benchmarks.

LG were also keen to tout the G3 new’s speakers and improved microphones, claiming a richer and clearer audio performance. Apparently, and much like Nokia’s high-end handsets, the G3 automatically optimises the audio recording levels to ensure crisp, undistorted audio in noisy environments. Again, we’ll just have to wait for the next PC Pro trip to Ibiza to put that one to the test.

LG’s G3 is still equipped with a 13MP sensor, but LG has added a variety of new features. First and foremost is the Laser+ autofocus system for taking quickdraw snaps. The increase in performance is obvious from the off. LG claim that it takes only 0.276ms to focus on a subject, and in our hands-on testing we can certainly believe it; crisp shots are taken almost instantaneously.

The two-tone LED flash is another boon, too, delivering much more natural lighting in low-light situations, much like Apple's iPhone 5S.

LG boasted that its uprated optical image stabilisation technology, OIS+, is dramatically more effective than the previous model. Given the potential for split-second photo opportunities, we certainly hope it lives up to its claims.

The front-facing camera has also had an upgrade, with a 2.1-megapixel sensor and f/2.0 lens taking centre stage. It’s certainly not the match of the Huawei Ascend P7’s mighty 8 megapixel front-facing selfie camera, but it’s enough to keep pace with the bigger names in the smartphone arena.

LG rolled out a fleet of matching accessories for the G3. The Android Wear-powered LG G Watch was clearly the most exciting of the bunch (sadly, we didn't get any hands-on time at the event), but LG also reeled out its answer to HTC’s DotView case - the Quick Circle case. This provides a see-through circle at the top of the front flap which can provide anything from analogue clocks to at-a-glance notifications.

There's also a wireless charging dock, but our favourite novelty was the pull-out antenna on the Taiwanese G3 units on show - it could be just the ticket for getting better 4G reception in the great outdoors.

Of late, there seems to be an almost-constant flow of show-stopping smartphones, and the LG G3 is no exception - it easily has the chops to square up with the biggest rivals that the smartphone world has to offer.

With a combination of design flair, features and overall performance that looks quite capable of distracting potential customers from the likes of the Samsung Galaxy S5, HTC One (M8) and even the Apple iPhone 5S, there’s only one question looming: how much is it going to cost? It's fair to guess that the LG G3 is going to be reassuringly expensive - we can't wait to get our hands on one.