Meet the Lenovo Yoga Book, the weirdest laptop of 2016 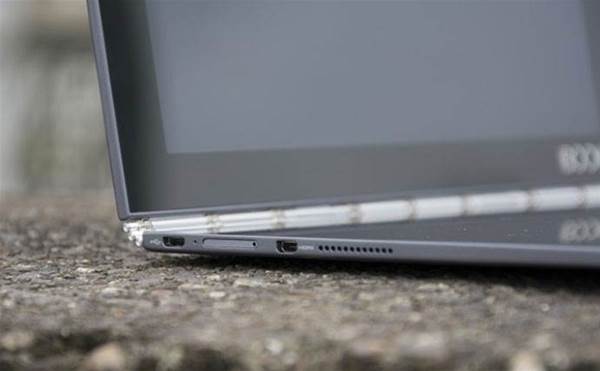 The Lenovo Yoga Book isn't quite like any laptop we've seen before.

Folded up, it's an artefact of beauty: the impossibly slim 9.6mm frame comes clad in elegant black magnesium alloy, with a tasteful industrial-styled hinge. And it weighs just 690g, yet open it up and it's a fully featured Windows 10 laptop, with a bright 10.1in 1,920 x 1,200 IPS touchscreen.

All right, when we say it's not like any laptop we've seen before, that's not strictly accurate. Lenovo also makes an Android version of the Yoga Book, which we recently had the opportunity to try out, and which impressed us very much.

Apart from the colour (the Android Yoga Book is offered in a choice of grey or gold) this Windows edition is physically identical, both inside and out.

That means it shares the Android edition's most distinctive feature: the futuristic “Halo” keyboard, which shines out of a completely flat touch-sensitive surface.

It's this that allows the Yoga Book to be so seductively thin, and it comes with a clever trick: tap the Stylus button above the key area and the keys instantly wink out. In their place, the lower half of the Yoga Book becomes a 10.1-inch tablet surface, directly mirroring the screen. Lenovo calls this the Create Pad, on which you can draw and scribble with the supplied stylus.

This could make the Yoga Book a very agreeable companion for anyone who likes to take handwritten notes and sketches. Office Mobile comes preinstalled, and integration with OneNote is faultless, so you can scrawl your notes directly onto the page, easily drop in media and text, and sync your notes to other systems via OneDrive.

With support for 2,048 pressure levels, it's possible to create some quite artistic illustrations, too. 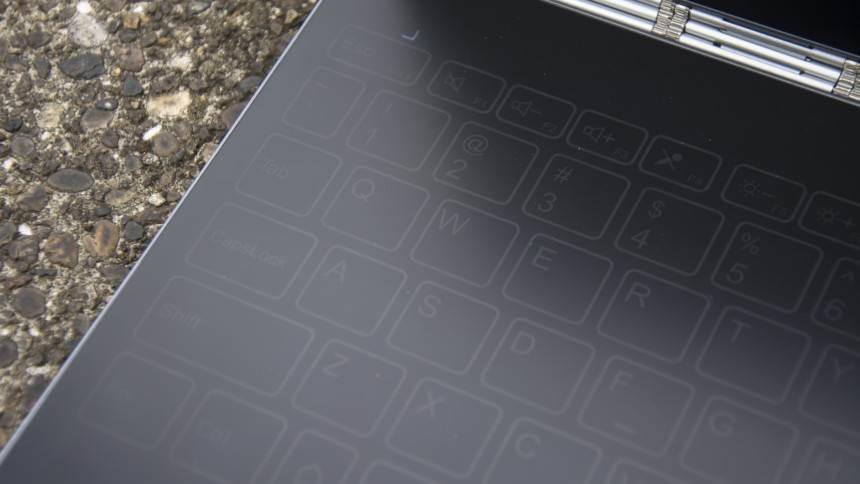 Of course, taking notes on a tablet can be a weird experience: when you write on one plane, your “ink” appears on another. One solution is to fold the screen all the way back round on itself, putting the device into tablet mode – the trademark of Lenovo's Yoga range – and write directly onto the screen.

But there's another option too. Lenovo calls its stylus the Real Pen, because by simply slotting in one of the supplied ink cartridges you can turn it into a bona fide ballpoint pen.

The supplied magnetic paper holder lets you clip a thin pad of suitably-sized paper on top of the tablet area, so you can write real physical notes, while OneNote simultaneously creates a digital record for easy sharing or archival storage.

It's a neat idea, and it is undeniably fun to hold the Yoga Book up portrait-wise, jot down your thoughts on paper to the right and see them digitally mirrored on the screen on the left.

But in truth, we doubt even handwriting die-hards would choose it for everyday use. Having to use a particular app, and a particular pen, and a particular clip holding a particular sort of paper, feels like a faff. It's definitely easier to grab a cheap spiral-bound notepad and take notes the old-fashioned way. 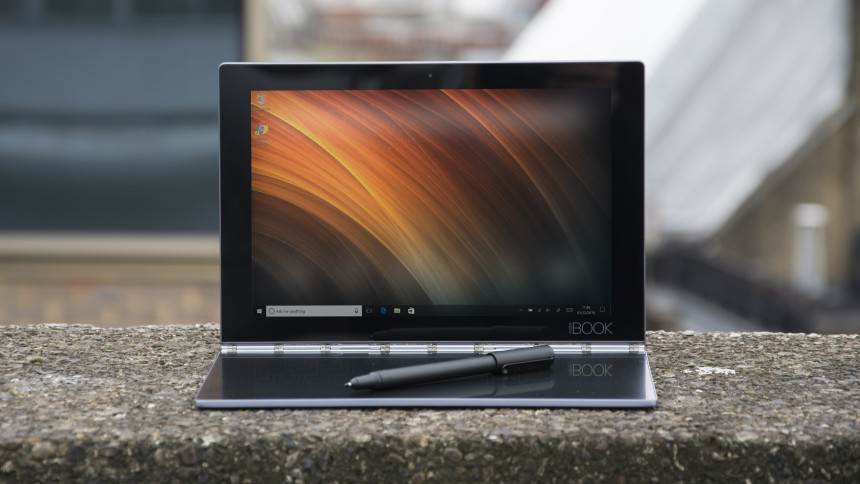 Unfortunately, if you're not won over by the Real Pen, the Yoga Book doesn't have much else going for it. The Atom x5-Z8550 processor isn't fast enough to make Windows 10 feel responsive – in our benchmarks it scored an ultra-low overall score of 12.

The 4GB of RAM is on the mean side, and the 64GB of built-in storage isn't particularly generous, either, although you can expand it with a microSD card.

The thinness of the thing means there's no room for regular ports: all you get is micro-HDMI and a single micro-USB port, used for both charging and hooking up peripherals via an OTG adaptor (which isn't supplied).

You also have to contend with that flat “keyboard”. With a little practice it's possible to type with a decent degree of accuracy but you'll never get up to full speed, and a sense of doubt always lingers as to whether your fingers are really landing in the right places.

Lenovo's auto-correct software provides little comfort and although it is possible to enable a gentle haptic buzzing and a quiet click when a key is registered, but feedback is too weak and the sound too laggy to be useful.

The touchpad is tiny, too, with its left and right buttons stuck out at the sides rather than at the bottom, so even when you switch from keyboard to mouse it's frustrating to use.

These shortcomings didn't seem like such a big deal for the Android edition of the Yoga Book, but then that OS was always designed as a lightweight platform for touchscreen devices.

On Windows, the tablet vision hasn't really taken off: you still expect to be able to type long emails and documents, to hook up peripherals and store a decent amount of data and applications on the hard drive, and the Yoga Book disappoints at every turn. 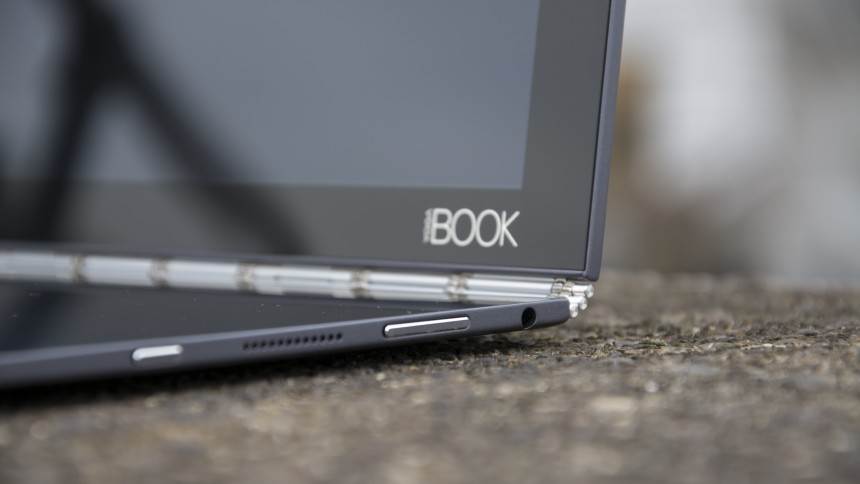 None of this is to take away from what Lenovo has achieved with the Yoga Book. It remains a striking piece of hardware, with excellent tablet and handwriting capabilities, and it has a beautiful, super-slim chassis. The screen is a strong point too, with a super-sharp pixel pitch and a maximum brightness of 422cd/sqm.

Inescapably, though, it's simply not powerful or versatile enough to recommend as a general-purpose Windows laptop. The Android version is a more coherent offering – and it's $200 cheaper too.