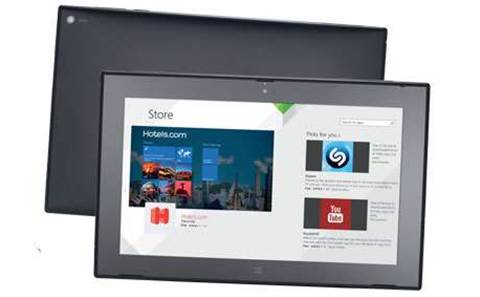 It’s taken a long time for the Finnish phone giant to get around to it, but Nokia has finally summoned up the courage to release its first Windows tablet – the Lumia 2520.

It’s built quite beautifully, with a solidity of construction reminiscent of the Lumia smartphone range at its best. A single, seamless slab of smoothly curved plastic wraps gently around the edges, and it’s topped off with a scratch- and shatter-resistant Gorilla Glass 2 panel at the front.

As with the company’s smartphones, the Lumia 2520 comes in a selection of different colours and finishes: glossy red or white, and matte black or cyan. Having handled both the gloss and matte versions, we prefer the matte, which picks up greasy fingerprints and scuffs less eagerly.

On the left edge of the tablet is a 3.5mm headphone jack and a DC power input socket. On the top are the volume rocker and power buttons, plus a drawer for microSDXC and SIM cards (impressively, every Lumia 2520 is 4G-enabled). On the right is a micro-USB 3 socket and micro-HDMI output for connecting an external monitor, and on the bottom is a docking connector.

Nokia claims “best-in-class outdoor readability” for the Lumia 2520, and we wouldn’t contest that. Its Full HD IPS screen, as measured with our X-Rite colorimeter, reaches a dazzlingly bright 714cd/m2, which is far higher than the Surface 2 and Apple iPad Air.

A quad-core 2.2GHz Qualcomm Snapdragon 800 CPU, coupled with Adreno 330 graphics and 2GB of RAM, ensures that performance is right up with the best.

In the demanding GFXBench 2.7 T-Rex HD test, the Lumia 2520 achieved an average 27fps – a result not even the iPad Air could match at 21fps. It returned a SunSpider time of 517ms, and a Peacekeeper score of 584, neither of which is quite as good, but are competitive with its main rival, the Surface 2.

And, just as with the Surface 2, the Lumia 2520 is a joy to use. The tiles, menus and onscreen keyboard of Windows RT 8.1 respond at hyper-speed. Apps launch far quicker than they ever did on the first generation of sluggish RT devices. Even the Office RT apps appear without delay.

The Lumia 2520’s battery life is better than the Surface 2’s, too. In our video-rundown test, with the screen calibrated to 120cd/m2 and flight mode enabled, it lasted 12hrs 1min – more than two hours longer than the Surface 2, and almost as good as the iPad Air’s 12hrs 55mins.

Even the 6.7-megapixel camera does a decent job, capturing clean, low-noise stills. But video capture was less encouraging, with footage appearing smeary and over-compressed.

The Lumia 2520’s biggest issue is that, since it runs Windows RT rather than full Windows, you can’t install proper Windows applications in the same way as you can with devices such as the Asus Transformer Book T100. However, that’s mitigated somewhat by the inclusion of Office 2013 RT, which in RT 8.1 has been bolstered by the addition of a desktop version of Outlook, and the steady improvement of the Windows Store.

More and more major titles are appearing, with official Facebook and Twitter clients, Dropbox and Evernote all available. Even when an app isn’t there, the browser is good enough that using the web equivalent isn’t as much of a pain as you’d imagine.

Where the Windows Store falls short is in the availability of small apps that accompany third-party products and services – such as printers, routers and NAS appliances. Most companies still develop for iOS and Android first.

To give Nokia its due, it has made an effort to make up for this with a few bonus apps of its own. Nokia Video Director delivers basic video-editing capabilities, and Nokia Storyteller creates montages of your photos and video clips. There’s Nokia’s Here Maps, plus its tweaked camera app, which gives you control over advanced features such as ISO sensitivity, white balance, shutter speed and exposure compensation.

Channel Angle
Got a news tip for our journalists? Share it with us anonymously here.

Grow your software revenue by selling these 5 affordable, essential tools for the modern workplace
By Jonathan Bray
May 6 2014
12:15PM