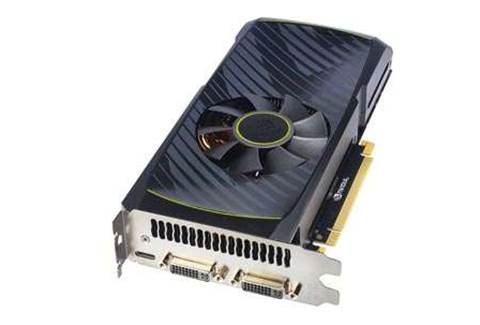 Nvidia's top-end GTX 580 and 570 both received Recommended awards and the next card down the scale, the GeForce GTX 560 Ti, aims to stretch that success into the mid-range.

It doesn't stray far from its older brothers. The GF114 core is a reworking of the GF110, and its changes echo those made to last year's GTX 460. Instead of the GTX 580's four and the GTX 570's three graphics processing clusters (GPCs) with 32 stream processors each, the GTX 560 Ti uses two 48-strong GPCs. It has 1.9 billion of Nvidia's new variable-speed transistors and a core clocked at 822MHz. The shader clock is a very high 1640MHz, and the 1GB of GDDR5 memory runs at 4000MHz.

The combination of higher clock speeds, reorganised stream processors and efficient transistors pushed the GTX 560 Ti to some fine benchmark scores. It averaged 40fps in our 1920 x 1080 Very High quality Crysis test. That's 8fps behind the GTX 570, and only 3fps behind the ATI Radeon HD 6950, which costs about $20 more.

The GTX 560 Ti stayed cool and quiet, with an idle temperature of 43°C that rose to 78°C at peak. It's just a shame it isn't so power efficient: a peak of 331W for our test rig is higher than the flagship Radeon HD 6970.