Our review of Apple's iPad:an oversized iPhone or the future of personal computing? 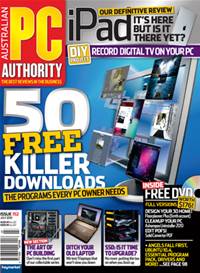 This article appeared in the July, 2010 issue of CRN magazine.

After months of build-up, we finally have an Apple iPad in our hands. But is this really going to create a new category of portable between a smartphone and a laptop, or is it a beautiful piece of hardware that will soon be doubling up as a fancy tea tray?

Ease the iPad from its box and it hits you: it really does look like an expanded iPhone, right down to the solitary Home button beneath the 9.7in display. The back is all curved aluminium, complete with large Apple logo, and the only blemishes are the power button, volume controls, a 3.5mm headphone jack and the familiar 30-pin dock connector.

The black bezel around the display looks wide, but in practice you need that space to hold the iPad without nudging the screen. The glass display is treated with a fingerprint-resistant coating, but even so, after a few minutes' use you'll find it covered in smudges. Apple doesn't provide a cleaning cloth in the box; a quick wipe on a sleeve is inelegant but effective.

The iPad is powered by a 1GHz Apple A4 processor and comes with 256MB of RAM, between 16 and 64GB of solid-state storage, 802.11n wireless and Bluetooth 2.1. We tested the mid-range 32GB model with Wi-Fi only; 3G versions will be available.

Apple claims "up to ten hours" of battery life, and we wouldn't argue with that. We managed ten hours of use, with a mix of video and music playback and heavy switching between apps.

There's no polite way of putting it: the iPad is a bit of a porker. Not in a chubby sense - it's incredibly thin - but it weighs 680g, more than twice as much as a Kindle. There's a good reason Steve Jobs demonstrated it resting on his knee in an armchair: it disguised the fact that you need that support for prolonged use.

Comfort aside, if you've used an iPhone, the experience will be instantly familiar. Nothing else comes close. The learning curve is non-existent and it's all helped by the iPad's sheer speed.

Web pages render quickly, and pinch-zooming is instantaneous. For those unsure what they'd use an iPad for, browsing the web is one of the most persuasive arguments. The added screen space brings much-needed freedom from constant scrolling and zooming.

There's one monumental caveat, though, and that's Apple's continuing disdain for Flash. You soon realise just how many websites rely on it, and while its absence isn't quite a killer blow, it puts a good few sticks of dynamite under Apple's claims that the iPad is "the best way to experience the web".

Whether in landscape or portrait mode, everything rotates to fit the orientation - there's no up or down, no right or wrong way to hold it.

The virtual onscreen keyboard is a limitation. The device is too wide to type with your thumbs, and pecking with one hand is a slow process.

Placing it on a desk in landscape mode, though, we quickly became proficient enough to hammer out short emails in no time. If you really want to write your novel on it, the iPad's Bluetooth will pair with any compatible keyboard, and Apple offers a neat iPad dock with an iMac keyboard.

A more serious criticism is that third-party apps can't yet multitask - at least until the OS 4 update introduces the feature in the summer. How much of an issue this is will depend on your way of using it.

Opening and closing apps is fast, and many retain their state when closed. It's those that don't that cause frustration; the New York Times Editors' Choice app, for example, sends you back to the homepage every time you open it.

Of course, there are apps that almost demand multitasking to function properly - think Twitter clients or Spotify. We know it will be rectified soon, but right now it's a limitation that hampers the iPad far more than it ever has the iPhone. OS 4 can't come soon enough.

Apple knows the success of the iPad will be driven by software, and it shows. Photos is perfectly suited to the device, with slick slideshows turning it into an instant photo frame. Calendar and Contacts apps aren't bulging with features, but they're beautifully designed.

The iPod app not only borrows much of its interface from iTunes, it's tightly integrated to it. That might sound good, but it means it will only play tracks directly from the device - you'll need a third-party app to stream from your iMac.

Apple also includes an enhanced implementation of the iPhone's Maps app, and it works fantastically: zooming and scrolling are smooth and fast. A serious downside of the Wi-Fi-only iPad is its lack of satnav capability. Maps is reduced to approximating your location using local Wi-Fi networks, which is far from accurate. Only the 3G versions of the iPad will include GPS.

The iBooks eBook reader app has been lauded as a "Kindle killer", and on first impressions it should certainly give Amazon pause for thought. The attention to detail even extends to a faint outline of the text on the previous page showing through as a page turns. However, there are the inevitable eye-strain problems of reading from a backlit display for any length of time, which you simply don't get with an E Ink-based reader.

At launch there are thousands of third-party apps available: the iPad is compatible with almost all the 150,000+ iPhone apps at the App Store. But once you've used full iPad apps, running an iPhone app feels limiting; they run either in a window in the middle of the screen at standard size, or scaled up to double size with the attendant pixel blurring.

We tested a number of third-party apps designed for the iPad, and results were mixed. The $9.99 Scrabble app shows innovation, allowing you to use your iPhone as a tile rack from which you flick the tiles to the board on the iPad. Given the limited time developers have had, it's no surprise that some of the other apps we tried were still buggy.

The iPad is the first in a series of products that could transform the industry, with Dell and others producing their own rivals. It can't match a laptop with a full-blown OS, but there's an argument for the iPad as a secondary device to go with a desktop PC.

Yes, it's constrained by Apple's controlling influence, but what the iPad has that no laptop can match is a sense of fun. It's difficult to express just how easy it is to use. We can understand why the fanboys have been lining up outside the Apple Store.

This article appeared in the July, 2010 issue of CRN magazine. Subscribe now