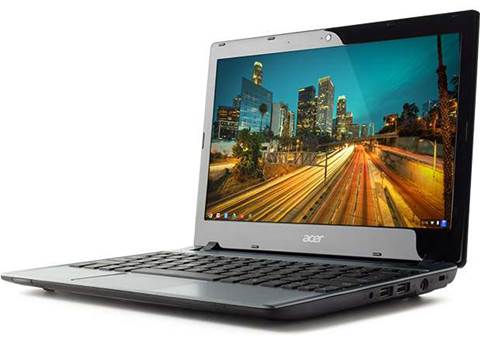 Improbably, after an inauspicious start, Google’s Chrome OS is slowly but surely gathering momentum. The Acer C7 is the second Chromebook we’ve seen in as many months, and as with last month’s offering from Samsung, it’s an affordable, likeable product.

As with the Samsung Chromebook, this Acer is a compact, lightweight laptop. The browser-based operating system means it isn’t as flexible as a full-blown Windows 8 system, but the OS’s recently introduced offline capabilities, combined with the huge collection of extensions, games and apps available through the Chrome Web Store, means it’s still a practical proposition.

The C7’s hardware is more than serviceable. There’s nothing that makes you sit up and say “wow” about the design, with nondescript grey plastic cladding the lid and base. But it isn’t ugly, it’s light at 1.32kg, and the 11.6in 1366 x 768 display provides a decent-sized space in which to browse the web and work.

The quality of the display can’t match the sumptuous panels of the best Ultrabooks and tablets, but it’s usable. The maximum brightness of 213cd/m2 is fine indoors, but we wouldn’t want to use it in bright sunlight. This figure is similar to that of the Samsung Chromebook; the main difference is the Acer C7 has a glossy finish, lending movie scenes and photos a fraction more saturation and depth. The downside is more potential for distracting reflections.

When it comes to ergonomics, the Samsung holds a slight advantage, but it’s close once again. The Acer is equipped with a similar Scrabble-tile keyboard and a broad, buttonless, multitouch touchpad, which makes typing and using the mouse largely comfortable. The keys don’t have much travel, but they’re well spaced and we found it easy to get up to a reasonable touch-typing speed. The dedicated Search button doesn’t replace Caps Lock as it does on the Samsung Chromebook, which is another bonus. We can even see ourselves getting used to the tiny cursor keys in time, although our first few days were spent repeatedly hitting the equally small PageUp and PageDown keys, located above the left and right cursor keys.

Under the hood, however, the two laptops couldn’t be more different. Where the Samsung has an ARM CPU, the Acer C7 boasts a more powerful dual-core 1.1GHz Intel Celeron 847, backed up by 2GB of RAM; it delivered a time of 520ms in the SunSpider JavaScript test – faster than the Samsung’s 892ms. It took 20 seconds to boot, and in general the C7 felt nippier in use than the Samsung Chromebook, especially when multiple tabs were open.

The improvement in performance is most keenly felt when playing video. Where the Samsung spluttered and puffed, this Chromebook played back both ABC iView and YouTube HD content smoothly, and coped well with high bit-rate MP4 files played from local storage.

Another point of difference for the Acer C7 is the presence of a 320GB 5400rpm hard disk – an unusual inclusion for a Chromebook (the latest Samsung had only a 16GB SSD) – giving extra space for a sizeable video, music and photo collection. The selection of ports around the edges is also more comprehensive. Although there aren’t any USB 3 ports, there are three USB 2 sockets, D-SUB and full-sized HDMI video outputs, a combined headphone/microphone jack, an Ethernet port and an SD card slot.

The Acer C7 is altogether a more powerful and capable machine than its Samsung rival, but the downside is that battery life isn’t stellar. We can’t run our standard laptop-based tests on Chromebooks, but, even with the screen dimmed a little, we were able to extract only four to five hours’ work time from the C7. You can expect an hour or so more in offline mode.

Still, we can see people taking the plunge and buying the Acer C7 simply because it packs so much in for so little. It costs only$299, and thanks to its sizeable hard disk and Chrome OS’s offline capabilities, it could be all the laptop many people need. For anyone requiring a basic machine, it’s a bargain.

Cloud application revenue made easy
By Jonathan Bray
Jun 6 2013
8:21AM