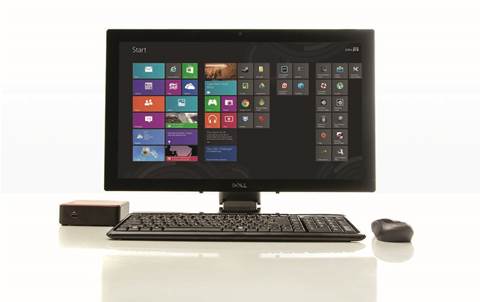 Intel’s Next Unit of Computing has had us intrigued ever since we first clapped eyes on it. We have played around with the barebones unit itself, but this system from Altech computers is the first commercial NUC PC to pass through our labs.

For those unfamiliar with the NUC, it is a small barebones PC built by Intel. It is, for all intents and purposes, the desktop implementation of its Ultrabook technology, packing a Core i3-3217U CPU and a motherboard based on the QS77 chipset. For the purposes of this system Altech has added 4GB of Corsair memory, and Intel 525 series 120GB SSD and a Centrino Wireless –N 2200 card.  The system runs the 64-bit version of Windows 8.

Altech has also included a Dell ST2340T touchscreen monitor with the NUC system. At first glance this seems to be an excellent choice, not only enabling the system to use Windows 8’s touch features to its fullest, but expanding upon the somewhat limited array of ports on the NUC itself.

This screen not only has a webcam and speakers built in, and extra USB 3 ports onboard, but it has a Gigabit ethernet port as well. It is designed to double as a dock for laptops, but for this to work it needs Displaylink software installed (which unfortunately wasn’t on our review unit).
With a bit of tweaking we got this up and running fine and we were largely impressed with the outcome. The extra ports are quite welcome, and the screen’s ability to fold all the way from vertical to horizontal makes the touch functionality quite useful.

It wasn’t all good news though – by the end of our testing everyone in the vicinity had learned to hate the NUC thanks to its annoyingly audible fan. Even though the 1.9GHz Core i3 CPU is one of Intel’s 17W processors, the fan on the system was continually spinning throughout our testing. Normally this wouldn’t cause any noise problems, but for some reason the system had been configured to run at maximum speed, rather than be managed by the thermal controls in the BIOS. This resulted in a tiny fan running at 6300rpm, a recipe for some very noisy computing, all in spite of the fact that the CPU itself was running at a perfectly acceptable 46 degrees.

Despite fears that our colleagues would come over and smash the whiny little PC out of frustration, we persevered with our testing. The results were as we’d expect from a similarly specced Ultrabook, with an overall score of 0.53 in our Real World Benchmarks. This translates to an acceptable level of performance for everyday office tasks, and light content creation, but it is by no means capable of heavy computing tasks.

Out of curiosity we ran our Crysis benchmarks on the NUC. The integrated graphics in the CPU were capable of a tolerable 26fps at low detail, but struggled to perform at higher details, with performance halving to 13fps at medium detail.This certainly isn’t a gaming box.

This NUC system really left us in two minds. While we see the potential of the hardware we were supplied, especially for everyday office use and home content consumption, the actual unit left us disappointed. With the fan constantly running at maximum speed the noise was intolerable for any extend periods of use, and the lack of preinstalled and preconfigured software for the monitor’s docking functions meant that a lot of the interesting features would go unused.

Ultimately this was a dealbreaker for us. If you are going to purchase a preconfigured system, then there is a reasonable expectation that it will just work out of the box. Having to find software online to get essential functions up and running, and then work out just how to enable power management solutions, is well beyond the audience for such a system, and this makes the NUC system something that we just can’t recommend in its current form.