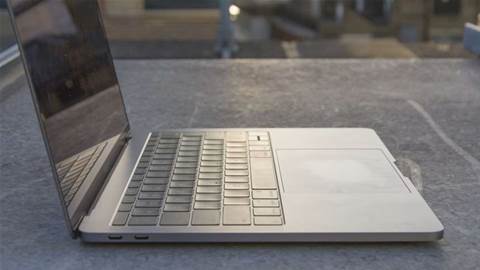 The Apple MacBook Pro (2016) has arrived in the office, but for once I'm feeling a little deflated.

Not because it's a disappointing laptop, or that it's considerably more expensive than last year's model, or even because it lacks certain slots and ports (more of which later), but because Apple has sent us the standard MacBook Pro. You know, the one without the Touch Bar – the most interesting new feature.

For now, then, you'll have to make do with my first impressions from the launch, which were largely positive.

To recap, the Touch Bar is an OLED touchscreen that sits directly above the keyboard, replacing the function key row. What appears on the Touch Bar is programmable, so different applications can have different “keys” appear. For example, Safari can display a set of “keys” for your open tabs, letting you quickly flip between them with a quick dab of the finger.

It doesn't sound like such an essential feature, but even in the short time I used it I could see how good it was, and how quickly I would miss it. Going back to my older MacBook Pro, I found myself thinking, “I'd love to use the Touch Bar for this”, and that was after just a short time with the new model. I'm really looking forward to seeing what developers do with it.

One thing that was immediately useful was the inclusion of a Touch ID sensor at the right-hand side of the Touch Bar. As with the iPhone and iPad, you simply place your finger on it to unlock the Mac. What's more, you can set it up so different users' fingerprints will log them in to their account without having to first log out.

The Touch ID sensor isn't quite flush with the rest of the bar, which makes it easier to find just by touch, but it feels a little un-Appleish in its design.

Still, there are plenty of folk for whom the “function keys” version I have in front of me will suffice. In fact, for some developers, who work function keys more than most, the version with physical keys may well be preferable, which makes it particularly galling to discover that the non-Touch Bar model is only available with the very slowest Intel processor in the MacBook Pro lineup.

But the internals aren't what really makes the MacBook Pro “new”, even without the presence of Touch Bar. Instead, there are three areas that define it: the thinness, the keyboard and trackpad, and the screen. 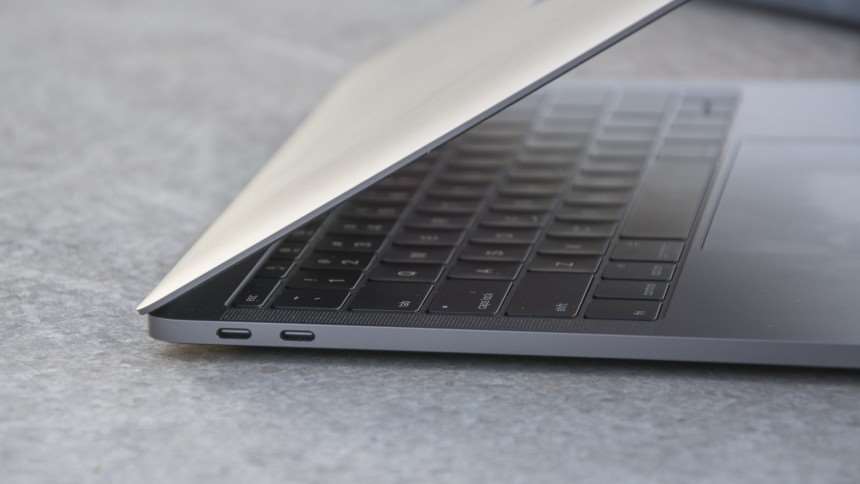 This is the thinnest and lightest MacBook Pro ever, with the 13in version coming in at a mere 1.4kg – the same as a 13in MacBook Air. If you think that's impressive, then consider that it's also thinner than a MacBook Air, at least at the thick end. Of course it doesn't taper like a MacBook Air to a razor-thin edge, but it's still a very slender machine.

And this doesn't mean sacrificing on speed. The review machine we were supplied with was the base model, containing a dual-core, 2GHz Intel Core i5-6360U processor that Turbo Boosts up to 3.1GHz with Iris Graphics 540 for company and 8GB of RAM for company, plus a 256GB PCIe-based SSD, and it feels every bit as nippy in operation as the 2015 vintage MacBook Pro I use every day for work.

Although you have to choose the Touch Bar model if you want a faster processor, the function keys MacBook Pro can be upgraded at the point of purchase with a 512GB or 1TB SSD and the RAM bumped up to 16GB. If you want faster, discrete graphics, you'll need to move up in size to the 15in MacBook Pro, which has turbo-powered ATI Radeon Pro graphics, and up to 2TB of SSD capacity. The 15in model comes with 16GB of RAM as standard. 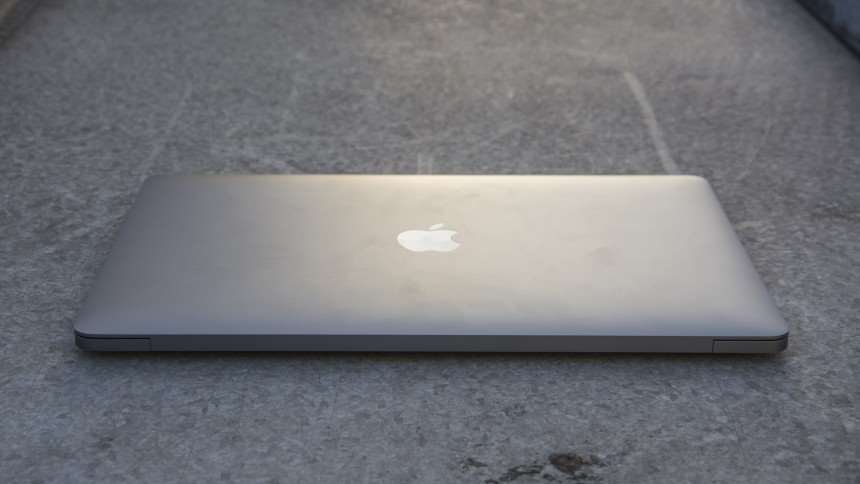 Even in this guise, though, performance is just dandy. In fact, it's just as you'd expect from this type of specification, although in our benchmarks it's barely quicker than the previous generation, with both laptops scoring 51 overall. In our benchmarks, we found there was a slight speed boost over the previous generation, with individual scores of 32, 64, and 68 in the image, video and multitasking segments of our benchmark tests, for an overall score of 51.

The MacBook Pro's legendary battery life doesn't suffer, either, and in our video-playback test it lasted a highly creditable 9hrs 50mins with the screen set to a comparatively bright 170cd/m2.

It's the SSD that shows the biggest improvement, however. By using four PCI Express 3, the drive in the new MacBook offers potentially double the bandwidth of the previous generation, and in testing, Apple's new laptop produced a fiery performance. In fact, it proved to be MacBook's most impressive upgrade, with sequential read rates of up to 6.2GB/sec and write speeds of up to 1.4GB/sec.

That's just insane and it puts the MacBook Pro way out in front of any of its rivals, ensuring you'll never have to wait too long for a big application, image or video file to read from disk again. 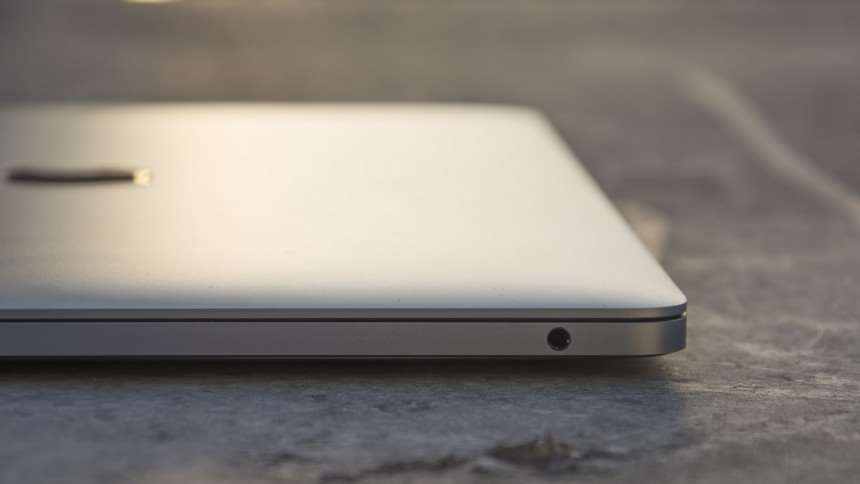 Elsewhere, the speakers have had an update, and now flank each side of the keyboard, firing upwards. Apple claims they produce twice the dynamic range of the previous model, which is tricky to test, but audio quality is clearly better, with more solidity, clarity and body all-round, which is nice.

The screen is delicious, though. As with the new iPhone 7 and 7 Plus, Apple is moving from sRGB to the wider DCI P3 colour gamut with the MacBook Pro, and the result is that everything looks a touch richer and fuller in colour. It's superbly bright at 542cd/m2, contrast is exceptional, hitting the heights at 1,426:1 while the screen delivers 99.3% coverage of the targeted DCI-P3 colour gamut. It's a truly exceptional screen.

The MacBook Pro's "love it or hate it" moment is its butterfly-switch keyboard, seemingly borrowed in all its shallow-keyed glory from the diminutive 12in MacBook. I'm well aware this won't be to everyone's tastes, but if you're sceptical, I'd urge you to give it a try.

Personally, I don't mind the shorter travel at all, and found it rather easy to get used to here. Indeed, the travel on the MacBook Pro feels somewhat more positive than on the MacBook, which helps keep typos to a minimum.

Likely to be less controversial is the the bigger trackpad. It's twice the area on the 15in MacBook Pro, and 46 percent larger on this 13in machine. Given that Apple has always led the way when it comes to making trackpads bigger, this isn't a surprise, and as always it's a great-quality trackpad, complete with its haptic, non-mechanical “click” and Apple's gloriously responsive and intuitive multitouch gestures. 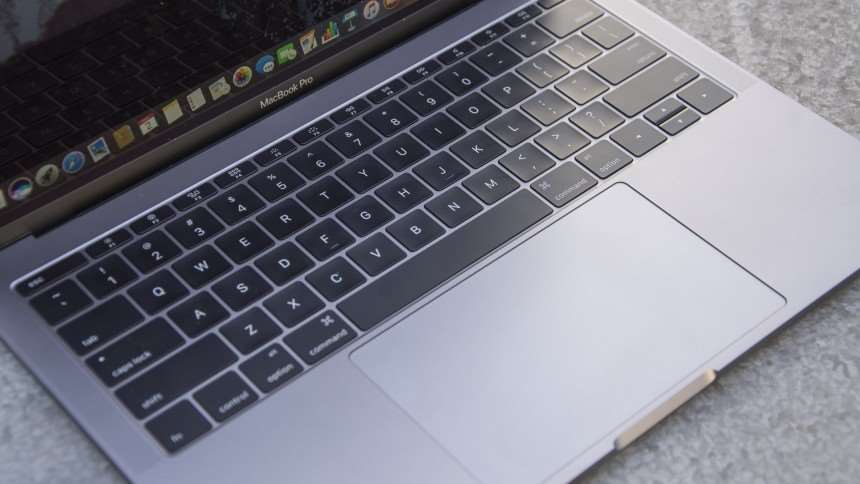 When I initially found out about this, I was worried about brushing over the touchpad by accident and making the cursor jump around. With the touchpad effectively occupying 44 percent of the entire width of the wristrest, and the touchpad a mere 4mm away from the bottom of the keyboard, your thumbs are constantly in close proximity to the top edge of the pad's surface.

Perhaps in acknowledgement of this fact, the MacBook Pro ships with tap-to-click disabled (as it has for some time, now, in fact), but even with this feature enabled I've found incidents of the cursor jumping around the screen miraculously low in frequency, and the benefits the large touchpad brings with it are great. It's far more comfortable to perform those multitouch gestures now, and it just feels more comfortable to use.

Alas, there's no positive spin I can put on the MacBook Pro's most irritating shortfall, and that's its lack of ports. I love the way I can hook up an HDMI monitor, two USB 3 devices and a pair of Thunderbolt peripherals to my current MacBook without the need for extra adapters.

The new MacBook Pro, however, cuts almost all of that out. In fact, the 13in base model I have here has only a pair of USB-Type C, Thunderbolt 3-enabled sockets on its left-hand edge – meaning that if you want to attach more than one external device while you're charging it, you'll have to budget extra for a USB Type-C adapter or docking station. 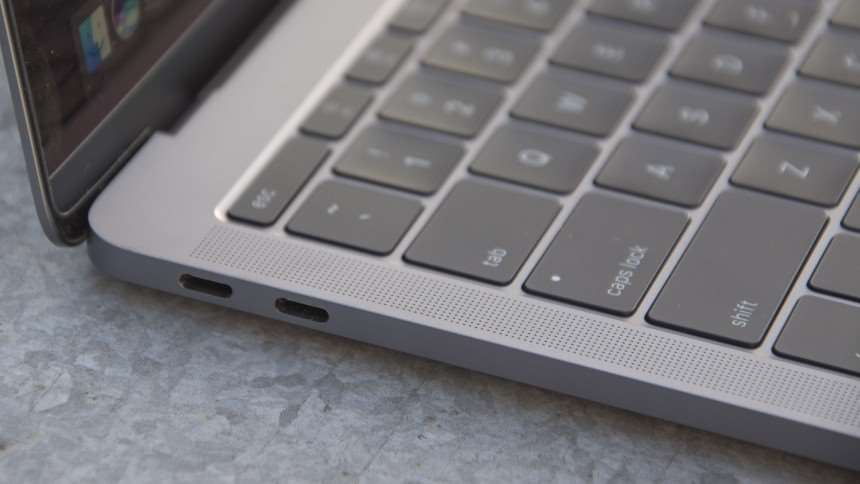 Despite that, there's no doubt that the new MacBook Pro is a great laptop. It's slimmer, lighter, has a slightly nicer display and in general is a more pleasant device to use than its predecessor.

Personally, I'm still sold. I might have to sell an organ or two to get one, but the MacBook Pro still represents the pinnacle of laptop design, and I see no reason to change back to a Windows machine just yet.

No, it's not quite as good value as it has been recently, and it's a shame Apple is pricing the Touch Bar model quite so high, but given the choice I'd still opt for the MacBook Pro.