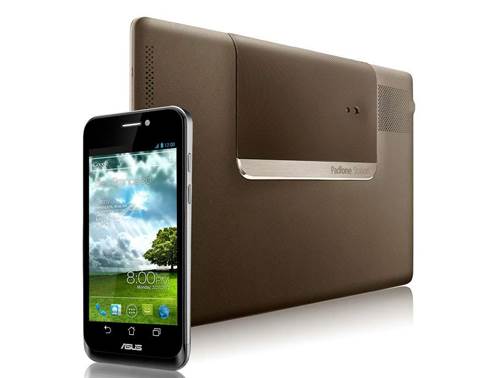 At first blush the concept seems so elegant – it’s a 4.3in Android phone that slots into a 10.1in screen, thus becoming a full-size becoming a tablet.

It’s a clever attempt to address the so called “gadget bloat” that many users are starting to feel. But how successful is the Asus Padfone?

There are two main components to the Padfone that make it work – the first (and arguably most important) is an Android powered smartphone. This is a 4.3in Super AMOLED screen with 540x960 resolution.

The Padfone runs Ice Cream Sandwich, has 32GB of memory and has a ridiculously quick 1.5GHz Snapdragon S4 CPU.

Asus has pre-loaded the phone with a number of apps including a proprietary cloud storage application, the full suite of Google Apps (G+, Messenger, Maps etc), music and even an eBook library manager.

The second part is the Padfone Station, a dock where the phone slots in, transforming itself into a 10.1in tablet (with a WXGA 1280x800 screen), with an additional battery inside.

The phone mounts in a closed slot in the back, connecting via the micro-USB and mini-HDMI ports on its side.

It should be noted that the lid on this slot felt a little flimsy, especially given that you need to pull it down a little to lever the phone out of the dock – we were constantly worried that we were going to snap it off.

The smartphone docked in the station

Docking is facilitated by some software from Asus – called dynamic display switching – which will adjust apps for the larger sized screen, theoretically on the fly, allowing for a seamless transition from phone to tablet.

The Padfone will even allow you to download tablet-only apps from Google Play and run them only when docked in the Station.

Both the devices are well built, feeling solid (apart from the aforementioned lid), featuring Asus’ “concentric circles” design on the rear. The Padfone comes with a sleeve that can double as a stand for the tablet incarnation and even a rather clever stylus.

Why so clever? Because the stylus doubles as Bluetooth headset to let you answer your phone when you’re in tablet mode.

A pen you can answer and speak into is one of those strange concepts that initially a bit compelling and fun, although we’re not really sure how long the honeymoon would last.

That said, we were impressed with the call quality that the stylus provided.

The stylus showing the mic and speaker

In terms of processing power, the Padfone impresses. The Snapdragon S4 pumped out a Quadrant score of 5204 which puts it well above most phones (except the Samsung Galaxy SIII) and many tablets.

HTML load time sat at around 7 seconds and the Sunspider test gave a solid result of 1821ms.

However, there are more than a few issues here.

First and foremost is the terrible battery life on the phone itself. At 1500mAh the battery just cannot sustain serious use and we found ourselves charging it twice daily.

The station has a 6600mAh battery built in and it works as a charger. This adds, in theory, an incredible amount of battery life.

But it presupposes that you will have the station with you at all times – which, given that it weighs a solid 730g, is a bit of an ask.

While we get that the Padfone is a gestalt entity, with the sum being greater than all its parts, we feel that those parts also need to be able to survive on their own.

The dynamic display switching mentioned earlier also failed to work more often than it did, usually closing down apps that weren’t supported. As dedicated users of the Swiftkey 3 app, we were increasingly annoyed that every time we docked and undocked the smartphone, the Padfone would reset to the Asus default keyboard.

The Padfone itself was also prone to crashing – we had at least one crash while attempting to start the camera function from the lock screen that required us to remove the battery to reboot.

That was the worst of it, but a number of other crashes and stalls proved annoying.

At the moment, the Padfone doesn’t feel finished – it’s an excellent concept but one that needs better execution. It still feels like more of a concept device than a retail one.

Luckily, Asus are the kings of the second generation. See, for example, the amazing evolution of the Transformer range. The Padfone remains a worthy idea and a welcome change in form factor and we await the arrival of version 2.0. Until then – especially at $999 – this remains a clever curiosity.

The Padfone can be pre-ordered from Harvey Norman for an August 14 release for $999. Package includes PadFone, PadFone Station, Bluetooth Stylus and PadFone Smart Sleeve. The keyboard dock is an additional option.