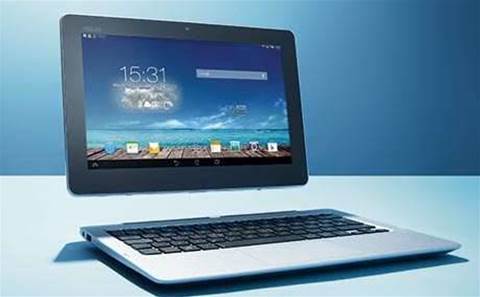 While Asus has created countless Windows and Android devices, the Transformer Book Trio TX201LA is the first to unite the two platforms. Part-tablet, part-laptop, this 11.6in device teams an Atom-powered Android tablet with the body of a Haswell-equipped laptop, and allows you to switch between the Microsoft and Google operating systems at the press of a button.

The Trio TX201LA feels nicely put together: brushed metal curls around the lid and base, interrupted only by the pin-prick speaker grilles, the lens for the 5-megapixel rear camera, and the power and volume buttons on the lid.

As a convertible, the tablet feels stout and rigid, and there’s barely any trace of give in the keyboard dock. Slot the tablet home and it wobbles a couple of millimetres back and forth, but two latches hold it securely in place. The weight is spread evenly, too, so it’s possible to tilt the display all the way back without it toppling backwards. It’s fantastically well built.

The downside is that the whole package weighs a hefty 1.7kg. The tablet makes up 710g of this, and the keyboard dock adds 990g to the figure.

There’s good reason for the Asus’ portly dimensions: the Trio TX201LA doubles up on more than only operating systems. Unlike the forthcoming Asus Book Transformer Duet TD300, which ingeniously powers both Android and Windows with the same Intel Core processor, the Trio TX201LA squeezes all the Windows hardware into the keyboard base – CPU, RAM, hard disk, wireless chipset and so forth – and has a different set of components in the tablet section, running Android on a discrete Intel Atom CPU.

The two parts are entirely independent. There’s a power button on the tablet for the Android hardware, and a separate button for the Windows system in the base. Indeed, you can walk off with the Android tablet portion and leave the Windows keyboard base attached to an external monitor.

Switching between Windows 8 and Android 4.2 is impressively slick. Docked and powered up, a dab of a key on the top right of the keyboard swaps between the two almost instantly. If either half is powered down, then a dialogue box pops up asking if you’d like to power up the other system.

Sharing data between the two operating systems isn’t entirely seamless. In Windows 8, the Android tablet appears as if it were connected via USB, so it’s possible to browse the tablet’s 16GB of storage and the contents of its microSD card and copy files back and forth reasonably quickly. Accessing data on the Windows disk from the Android OS is less speedy, however, since it’s necessary to use Asus’ PC Tool software, which transfers files over any existing Wi-Fi network.

This means that both devices need to be on the same network, and transfer speeds will be limited to the capabilities of your network.

The tablet makes a good first impression, thanks to its fine 11.6in, full HD display, which serves up bold, lively images and realistic-looking colours.

On the inside, Asus has opted for a dual-core 1.6GHz Intel Atom Z2560 CPU, 2GB of RAM and 16GB of storage. While it isn’t the most generous specification, the Atom CPU is enough to keep Android 4.2 feeling responsive.

Battery life is decidedly average. On its own, the tablet lasted only 5hrs 5mins in our video-rundown test – a result that’s less than half what we’d expect from an Android tablet.

The Windows side of things is more successful, but still mixed. Asus has packed the Trio’s keyboard base with an impressive-looking specification, including a 1.6GHz Core i5-4200U Haswell CPU, 4GB of RAM and 500GB hard disk.

In many regards, the Trio is an excellent 11.6in laptop. The Scrabble-tile keyboard has a sensible layout and a reasonable feel to every keystroke, and the top-quality touchscreen makes it pleasant working in Windows 8.

As a concept, we can see some appeal in the Transformer Book Trio TX201LA. The hardware is well designed, the display is excellent, and the fact that the Android and Windows halves of the device work entirely independently raises some interesting possibilities.

Channel Angle
Distributors Synnex and Dicker Data
RRP From $1,599
Launched January 2014
The reviewers say “This is neither an outstanding Windows laptop nor a great Android tablet – and it simply isn’t affordable enough for us to forgive its flaws. We love that Asus is trying something new, but at this price, an Ultrabook and a separate Android tablet would be a much better option.”
Got a news tip for our journalists? Share it with us anonymously here.