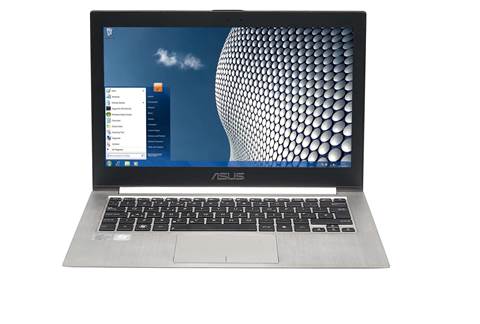 Asus’ Zenbook UX31E almost nailed the ultrabook formula at the first attempt. It brimmed with potential: it had the looks, the power, the stamina and, crucially, the price.

Now Asus has answered the criticisms levelled at its original Zenbook and rung the changes for its new model, the Zenbook Prime UX31A. With the addition of a gorgeous 13.3in Full HD screen, Intel’s latest Ivy Bridge technology and a backlit keyboard, it’s gunning for the money-no-object ultrabook crown.

The Zenbook is as eye-catching as before. A dark swirl of metal spins across the lid, softening into a lighter brushed metal across the base, and the sharp, crisp lines of the UX31A’s body are undeniably attractive.

When it comes to weight, the UX31A remains firmly in the featherweight camp at 1.4kg – light enough that you could forget it’s in your bag. We’re fans of the compact power supply, too – it adds a mere 200g to the overall weight.

Thanks to the presence of an Intel Ivy Bridge CPU, however, the UX31A’s stamina is unlikely to leave you rushing to a mains socket on a particularly frequent basis. Dim the screen and turn off the wireless radio, and the UX31A will keep going for 9hrs 5mins.

Pile on the pressure, and the Core i7-3517U processor, 4GB of RAM and 256GB SSD relish the challenge. A result of 0.68 in our Real World Benchmarks places the Asus just ahead of the Sandy Bridge Core i7 in the previous model, which scored 0.62.

Gaming performance isn’t going to harm Xbox sales, but the UX31A’s Intel HD Graphics 4000 GPU is far more capable than the previous generation. The 37fps average in our low detail Crysis test dropped to 19fps at 1600 x 900 and Medium detail settings – but this is an impressive level of performance for such a dainty machine. Keep the resolution and detail settings to modest levels, and this slender portable will gladly deliver a basic level of gaming performance.

Prime pixels
While the performance increases might be subtle, the display is impossible to ignore. The Zenbook Prime’s display humbles its predecessor, with an IPS panel delivering wide viewing angles and rich, saturated colours. Both brightness and contrast are far superior to previous Zenbooks, and while the 166ppi can’t match the 220ppi Retina display of Apple’s MacBook Pro, it still makes for crisp images.

Put to the test with our colorimeter, the Full HD display delivers: the 1032:1 contrast ratio and a maximum brightness of 424cd/m2 are as good as laptop displays get, and the average Delta E of 3.1 indicates outstanding colour reproduction. If we have a moan, it’s minor: the panel’s 6185K colour temperature is some way off the 6500K ideal, and lends images a warm, rosy tint.

Improved feel
Stop gawping at the pixel-packed display, and you’ll note one of the other improvements Asus has brought to the Zenbook Prime: a backlit keyboard. It’s certainly a handy feature, but we’re more pleased to find that the UX31A’s keyboard has improved on its predecessor in more essential ways. Each key gives welcome resistance at the beginning of the stroke, and softens into a cushioned halt as you press home. It isn’t the best we’ve used, but it’s spacious and comfortable enough to not cause any problems in everyday use.

The touchpad was a huge stumbling block with the original design, and it seems as though Asus has ironed out the worst of the issues. Multitouch gestures work more reliably, and the overall experience is less infuriating than before.

It isn’t perfect, however – we occasionally had trouble when clicking and dragging items across the screen, and we aren’t too keen on the placement of the huge pad either. Our palms regularly grabbed the cursor and nudged it down the page while we were typing, leaving us reaching for the keyboard shortcut to disable the touchpad.

Connectivity is another of the UX31A’s weaknesses. The slim wedge design doesn’t leave much room for ports and connectors. Asus has squeezed in one USB 3 port on each edge, micro-HDMI, an SD card reader and a headphone output.

If you want Gigabit Ethernet or D-SUB connections on the Zenbook Prime, you’ll have to make sure you don’t forget the supplied dongles. Still, the dual-band 802.11n wireless makes amends, and there’s Bluetooth 4 as well.

Premium price
The elephant in the room, however, is the Zenbook Prime’s price. At the time of writing, we couldn’t find the UX31A for less than $2000, and some retailers were asking as much as $2250. This isn’t only more expensive than its predecessor, the $1600 UX31E, but also more expensive than most other Ultrabooks on the market – as well as both of Apple’s MacBook Airs.

The burning question is whether the larger SSD, Full HD display and backlit keyboard are sufficient to justify the additional expense – and we aren’t convinced that they are. For this money, we don’t expect improvements; we expect a practically perfect product, and the Asus Zenbook Prime UX31A is some way from achieving that.

However, the UX31A remains a great all-round ultrabook. The Full HD display is a welcome upgrade, the design is simply gorgeous, and both the performance and battery life are as strong as you’ll find on an ultrabook. The issue is with the competition: with rival models also delivering solid all-round performance – if not the pixel-perfect display – for hundreds of dollars less, the Zenbook Prime UX31A seems to have priced itself out of the market.

Eliminating departmental friction within MSPs
By Sasha Muller
Oct 16 2012
8:05AM