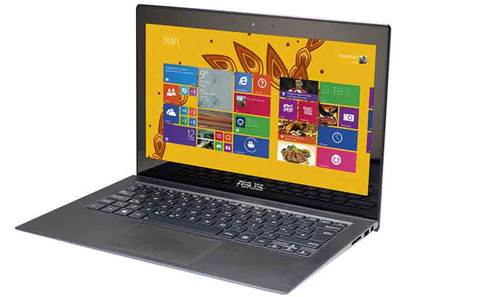 Glass isn’t the most obvious choice when it comes to crafting an Ultrabook, but Asus has thrown caution to the wind with the Zenbook UX301LA. Stepping in at the top of the Zenbook range, the UX301LA sandwiches its 13.3in touchscreen between two plates of Gorilla Glass and partners a top-flight Haswell CPU with not one but two SSDs.

The bottom half is formed from metal brushed to a silky, matte sheen, and the squared-off top half contrasts with the softer, more gently tapered curves of the base. Despite the makeover, it’s still unmistakably a Zenbook: concentric circles ripple outwards from the gleaming, silver Asus logo on the lid.

The 1.44kg glass and metal chassis is beautifully constructed. There’s barely a millimeter or two of flex in the base, and although the lid is more pliant, the Gorilla Glass promises to do its best to protect the Full HD display from harm.

Inside, Asus has partnered a potent Haswell CPU, the 1.8GHz Core i7-4500U, with 8GB of RAM and a pair of 128GB SSDs lashed together in a striped RAID0 array. It’s this RAID array that makes the Asus feel particularly fleet of foot, with heavyweight applications such as Adobe Photoshop bounding into view in seconds.

Remarkably, the Asus’ mSATA SSDs aren’t far behind the lightning-quick PCI Express SSD of the Apple MacBook Air: with a sequential read speed of 798MB/sec and a write speed of 523MB/sec in the AS SSD benchmark, the Asus’ storage is incredibly quick.

The Core i7 CPU provides a fine balance of speedy application performance and long-lasting battery life. In our Real World Benchmarks, the Zenbook UX301LA achieved a solid overall result of 0.67, which is performance enough for any application. Despite such a rapid turn of speed, the Asus has huge reserves of stamina, thanks to a 50Wh battery: it lasted 13hrs 25mins in our light-use battery test.

Admittedly, that’s with brightness dimmed down to 75cd/m2 and Wi-Fi off, so it won’t last as long in everyday use. Nonetheless, it puts this sleek Ultrabook out in front of its rivals, including the Dell XPS 12, which lasted 12hrs 41mins, and the MacBook Air, which lasted 11hrs 43mins.

While the range-topping model has a Retina-style, 2,560 x 1,440 touchscreen, the model we tested makes do with a less exotic Full HD panel. In some respects, though, that’s no bad thing: high-DPI displays aren’t always an asset, since few applications currently take full advantage of the extra pixel density.

It’s a technically competent screen, too, with brightness peaking at 400cd/ m2 and a high contrast ratio of 931:1. Closer inspection reveals notable weaknesses, however. Dark greys are reproduced as black, leaving detail obscured in the darker corners of images and movies, and the lightest greys are indistinguishable from white.

Asus traditionally colour-calibrates its displays, but the Zenbook UX301LA’s panel isn’t up to scratch in this regard: we measured an average Delta E of 3.5, and while the panel covers most of the sRGB colour gamut, its tendency to oversaturate green tones left it with a wayward maximum Delta E of 10.4.

The Scrabble-tile keyboard gets the Zenbook UX301LA back on track, however. The square keys depress with a refined, cushioned stroke, and the layout is perfect, with no unduly shrunken keys and a highly usable cursor cluster. It’s also LED-backlit, with the backlighting adjustable through three brightness levels.

The reviewers say “The Asus Zenbook UX301LA is undeniably an achingly desirable laptop. The display isn’t all it should be, but its stunning design, performance and features are all first class.”

How to pitch it The ASUS Zenbook combines a beautiful sleek design with premium specifications to deliver seemless multi-tasking performance and outstanding energy efficiency. Its 10-point multi-touch screen is smooth, responsive and gives incredibly sharp images. These Ultrabooks are an essential business tool offering ultra high-resolution displays, performance and style.