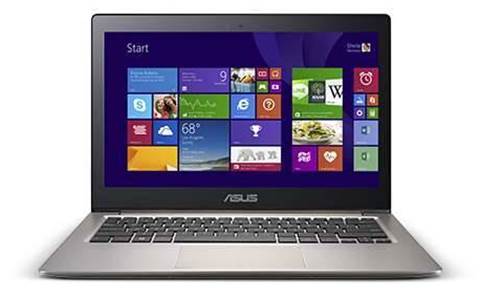 Asus’ Ultrabooks have been treading the same, rather formulaic, path for some time now, and while the 13-inch Zenbook UX303LA doesn’t break that mould, the price is attractive, and it forges ahead in one important area: it’s the first laptop we’ve seen to sport one of Intel’s new Broadwell 14nm Core i7 CPUs.

Overall the Core i7 offers enough speed for most duties. The 128GB SanDisk SSD inside the Zenbook is no slouch either, delivering speeds of 496MB/sec and 329MB/sec for large-file read and writes in ASSD.

Battery life and cooling
With Broadwell, the big change is to the manufacturing process, which goes down from 22nm to 14nm – promising significant power savings over Haswell. Intel’s own figures suggest overall power consumption reductions of up to 13%.

In our tests, the UX303LA delivered on this potential in spades. Tasked with the light-use battery benchmark, which browses a series of locally stored web pages with the screen set to a brightness of 75cd/m2, the Zenbook lasted 13hrs 6mins. Bearing in mind that this is a Core i7, that’s seriously impressive; in the same test under Boot Camp, the Haswell Core i5-based Apple MacBook Air 13in kept going for only 10hrs 8mins.

The UX303LA is also a very quiet machine: although there’s a fan inside, you wouldn’t know it.

Design and ergonomics
Physically, the Asus Zenbook UX303LA is no groundbreaker, but this isn’t necessarily a bad thing. We’ve always liked the Zenbook design, with its circular-patterned metal lid and matte-finish metal base. It feels solid and sturdy, capable of roughing it.

Despite the rugged-feeling chassis, the UX303LA is slim and light, weighing 1.4kg (1.7kg with the charger) and measuring 21mm thick – it’s as portable as the 13in MacBook Air, if not quite as sleek. The keyboard provides a decent amount of travel and plenty of feedback, as well as adjustable backlighting behind the keys.

The Asus Zenbook UX303LA’s display is a real highlight. It’s a sensibly specified 1,920 x 1,080 panel with a semi-matte finish, and it uses IPS technology to deliver crisp, clear visuals and excellent viewing angles.

Indeed, if there’s one area where the UX303LA outperforms the current MacBook Air, it’s here. The Air’s TN display is neither as bright nor as colour-accurate, and the resolution is lower as well. Still, with new MacBook Air models expected imminently, that could change.
As expected, Intel’s new Broadwell Core i7 doesn’t rewrite the rulebook. However, its improved efficiency, coupled with Asus’ budget-conscious specification, means this first outing is a positive one – the Zenbook UX303LA represents superb value.

It costs less than the current bottom-of-the-range MacBook Air 13in, and that gets you a Core i7-based machine with a 128GB SSD, 13-hour battery life and a top-quality display. It’s a lot of laptop for the money.

Distributors: Synnex, Dicker Data and Ingram Micro
RRP: $1,499
Launched: October 2014
Next product up: Zenbook UX305 (Available from April 2015)
The vendor says: “The UX303LA is a great example of the latest generation of light and thin laptops. Enterprise and SMB customers will appreciate the power delivered by the 4th Gen Intel Core CPU and dedicated graphics – and the elegant spun metal design is an excellent point of difference for those wanting a premium solution.”
Adam Lee, commercial product manager, Asus Australia