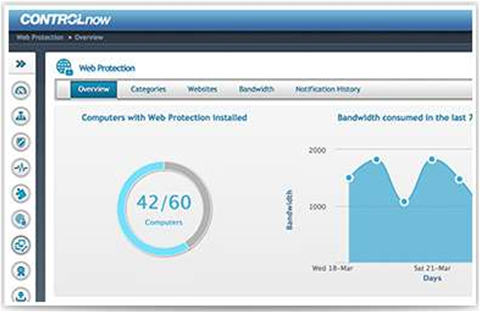 ControlNow is a flexible offering that combines anti-malware and web-filtering services with a complete network-support toolbox. (It was renamed from GFI Cloud after the company split in two, with the vendor now operating under the name LogicNow.) While keeping users safe, we could monitor their system vitals, inventory their assets, ensure they were fully patched, and run remote-support sessions using TeamViewer.

The base antivirus service starts with a 10-seat licence for one year for $180; monitoring, patch management, web protection and remote control are all optional. The ControlNow agent only supports Windows systems and takes less than a minute to install, after which each system popped up in our account portal in seconds.

After reviewing our licences, we decided which components should be activated on each system. For the antivirus service, this extended install time to six minutes; this increased to around 13 minutes for those with web protection and monitoring activated.

New systems are placed in a default group with a base set of profiles for controlling licensed services. It was easy to create new groups for our servers, workstations and Exchange 2013 system, and tweak their policies.

The portal dashboard shows systems requiring attention, while the network view reveals them all, with each assigned a coloured status icon. Click on one to access its services, check its hardware, see what it’s been up to on the web and run malware scans.

Named simply Antivirus, this component uses the VIPRE scanning engine that LogicNow spun out recently to ThreatTrack Security. Yet it still found all 20,000-plus samples in the AV-Test malware reference set and returned a 99 percent zero-day detection score.

A quick scan of 72GB of data on a dual Xeon E5-2400 Windows Server 2012 R2 system took four minutes, but a deep scan dragged on for almost two hours. System overheads weren’t a concern, though, with CPU usage averaging only 3 percent during the deep scan.

The monitoring service keeps an eye on areas such as hard-disk health and running processes, provides four system performance monitors and lets you run remote command-line or PowerShell sessions. Asset tracking is free, and we found its hardware and software inventory was accurate.

Activate patch management and it will download a database of recommended patches and scan systems to see what’s missing. We could auto-approve patches from selected vendors and reduce download demands by nominating one group member to act as a central repository for all of the others.

The quick responses to portal commands impressed us, with policy changes and quick-scan requests acted on in under a minute. Remote reboot requests sent a pop-up warning to the targets in just 14 seconds, with the reboot following five minutes later.

Emails are sent out regularly when systems aren’t responding or have issues, but this doesn’t include malware alerts, so we had to keep a close eye on the portal to spot any attempted attacks. ControlNow doesn’t provide email protection, either, so you’ll need to source this separately.

The product’s star player is web protection. Up to 75 URL categories can be blocked or allowed on a per-policy basis, while bandwidth allowances can be applied to general usage, streaming media and uploads. Email alerts are issued if a threshold is breached, and the portal provides graphs for bandwidth usage, website requests and alert status for the entire network or for any user- selected systems.

Subscribing to all LogicNow’s services will more than double your outlay over other cloud security products, but you’re getting a lot for your money.

RRP Starts from $12 per service, per device, and is tiered pricing