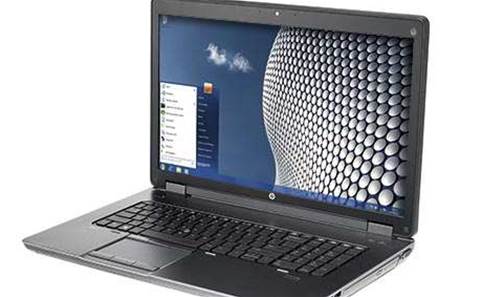 HP’s ZBook range of mobile workstations has finally landed. The ZBook 17, the biggest model in the line-up, partners a 17.3in display with a burly, upgradeable chassis, a truckload of connectivity and high-end hardware.

The ZBook 17 is an absolute giant. Measuring 416mm wide and 34mm thick, this mobile workstation weighs in at 3.41kg even without the mains charger. Factor in the 120W PSU and the whole package comes in at a back-breaking 4.5kg.

The flipside to the ZBook 17’s sheer bulk is that it feels outstandingly well built. Metal sheets shield the lid and keyboard surround, and tough plastics make for a chassis that’s rock-solid. If you’re intending to cart the ZBook 17 from office to office, the build quality inspires confidence.

The ZBook 17 sped to a result of 1.05 in our Real World Benchmarks. Those looking to use the ZBook 17 away from the mains will almost certainly need to shell out for a spare battery or two, though. Despite a meaty 75Wh power pack, the ZBook ran dry after 3hrs 29mins in our light-use battery test. Working flat out, the HP lasted only 1hr 3mins.

Clap eyes on the DreamColor display, and it’s clear where the money has gone: it’s simply immaculate, and the level of customisability is impressive. HP’s Mobile Display Assistant software makes it easy to switch between the preset Native, AdobeRGB, sRGB, Rec.601, Rec.709 and DCI-P3 colour spaces. Hardware calibration is on the cards, too, but the DreamColor Profiling Solution software only works with HP’s rebranded DreamColor versions of X-Rite’s i1Display colorimeters.

Even by workstation standards, the ZBook 17 is seriously well connected. It’s one of the few Windows laptops we’ve seen to include a Thunderbolt 1 port – a welcome addition for daisy-chaining high-speed storage, displays and professional-class peripherals.

Flip the ZBook upside down, flick a latch and a metal access panel slides off to give access to the internal components. Here, there are two 2.5in drive bays (one is free), an mSATA slot, a mini-PCI Express slot and an M.2 card slot. There are two RAM slots, with two more under the keyboard.

The optical drive can be replaced with an optional hard disk upgrade bay, and combined with the other two 2.5in drives to form a RAID0 or 5 array.

The ZBook 17 isn’t short of competition – Dell’s Precision M4800 is more than a match in many regards – but the DreamColor display puts the ZBook in a different class. For portable power and a colour-critical display, there’s nothing else like it.

Next product below ZBook 15