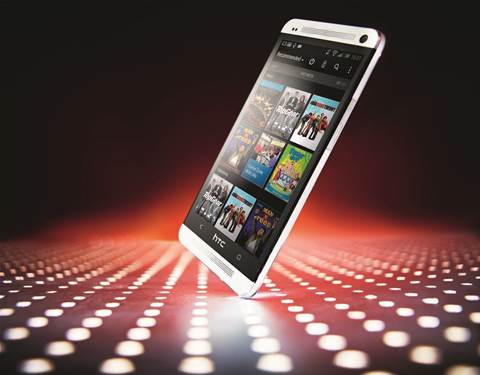 HTC couldn’t have chosen a tougher time to release its new flagship smartphone, the HTC One. With no shortage of rivals vying for the premium handset crown, the competition has never been so fierce. HTC has responded in fine style, however: it’s unleashed the world’s best smartphone.
The One makes a stunning first impression. Each handset is hewn from a single block of aluminium: HTC claims it takes more than three hours to craft the metal body alone. It’s clearly time well spent; the attention to detail is evident, with the curved rear fitting snugly in the hand. Bands of off-white polycarbonate slash across the rear and around the phone’s circumference; every edge is chamfered; and the speaker grilles are formed from grids of finely-milled pinpricks.

Gorgeous looks are matched with superb build quality. It isn’t the lightest or slimmest handset – its 143g weight and 9.3mm thickness put it in the middle of the premium smartphone pack – but it’s one of the toughest. The metal construction and Gorilla Glass display feel bomb-proof.

Unfortunately, there’s a price to pay for such build quality. The rear panel isn’t removable so there’s no access to the battery, and expandable storage has fallen by the wayside – you’re stuck with 32GB of onboard storage.

Still, there’s little else missing. Support for 4G, Bluetooth 4, NFC and dual-band 802.11ac Wi-Fi is included, and a tiny infrared transmitter hidden within the power button allows the HTC One to control set-top boxes and TVs. The stereo speakers deliver unusual levels of clarity, too – the quality is a cut above most smartphones.

Crystal clear
The One’s display is equally refined. It isn’t the first phone with a 1080p screen – the Sony Xperia Z takes that honour – but the HTC’s 4.7in panel is markedly better. Its maximum brightness of 481cd/m2 and contrast ratio of 1202:1 soundly beat the Sony’s vital statistics of 409cd/m2 and 454:1, and the HTC also bests the Sony for colour reproduction and viewing angles. The very darkest greys are crushed into black, but that’s its only weakness. In every other respect, it’s the match of any other top-flight smartphone, including our previous favourites, the Samsung Galaxy S III, and HTC’s confusingly named One X.

Whether the HTC’s Full HD resolution offers any real benefits over a 720p panel is debatable. With the Nexus 4 and HTC One side by side, there’s no difference in clarity at all – everything is pin-sharp.

However, the One’s dedicated home and back buttons beneath the screen have a greater effect on day-to-day usability. While rivals such as the Nexus 4 sacrifice screen real estate to make space for onscreen home and back buttons, every one of the HTC One’s pixels is put to good use.

Power
Despite having to power all those pixels, performance is flawlessly smooth. It’s the first time we’ve seen a phone with the Qualcomm Snapdragon 600 chipset, and it’s a monster: its four cores run at 1.7GHz, and are partnered with 2GB of RAM. It’s enough to better the previous record-holder, the Sony Xperia Z, by a country mile – in Quadrant, the One scored 11,617, compared to the Sony’s 7744; in Geekbench it outpaced the Sony’s 1911 by some margin, achieving 2733. It repeated the feat in Peacekeeper, scoring 692 – more than double Sony’s result.

In real-world use, the HTC One doesn’t disappoint. Apps open swiftly, menus slide past without a judder, and the handset responds instantaneously to every prod and flick of a finger. Gaming is a strong point too, and, despite having to power the Full HD display, the Adreno 320 GPU pushed through the most demanding titles. While Real Racing 3 stuttered on Sony’s Xperia Z, the One delivered a far smoother experience.

Amazingly, such power doesn’t come at the expense of battery life. The One’s sizable 2300mAh battery had 60% of its capacity left after our 24-hour rundown test – 10% less than the Sony Xperia Z, and on a par with the Samsung Galaxy S III.

Camera
While its rivals are touting 8- and 13-megapixel cameras as standard,  the One has a mere 4-megapixel sensor. The difference, according to HTC, is that its UltraPixel system makes up for this by using larger pixels that capture more light. Combined with optical image stabilisation, these larger pixels are supposed to improve quality in low-light situations.

The One’s camera slots into the top tier of smartphone shooters, with accurate colour reproduction and sharp detail – but it isn’t perfect. Our sample shots were a tad noisy, and the One’s low-light images weren’t a match for those taken with the Nokia Lumia 920. That said, it’s still a good camera. The HTC’s macro mode took detailed close-up shots, and the panorama mode quickly captured widescreen images without major stitching errors. The burst mode is effective at capturing fast-paced action, too.

A tap on the top of the screen reveals the camera’s novel feature – Zoe. This shoots 3.6 seconds of 1080p video while simultaneously snapping 20 4-megapixel images – handy for grabbing the perfect action shot.

Sense
The HTC One runs Android 4.1.2. It isn’t the latest version, but HTC has  filled the gaps with its own additions. The notification drawer has a link to the full settings menu, and HTC’s gesture keyboard works well.

HTC has also loaded the One with version five of Sense, its Android user interface overlay. Sense 5’s key new feature is BlinkFeed, which replaces the traditional homescreen with a gallery of web content, news stories and social media posts. It’s the first thing to appear when the phone is unlocked, and it looks superb: scrolling downwards reveals tiles loaded with pictures, headlines and status updates.

Relevant topics and a selection of specific “featured” websites can be added to or removed from the feed, and Facebook, Twitter, Flickr and LinkedIn integration can be toggled on and off. It isn’t possible to disable BlinkFeed completely, but it can be moved to an alternative homescreen if you don’t want it centre stage.

BlinkFeed works well for casual browsing, but there’s room for improvement. Since HTC hasn’t yet released the SDK for third-party apps to publish their own content, there are only 12 “featured” feeds to choose from, and 39 wider categories. The ability to add specific websites would be welcome.

HTC’s TV app uses the One’s infrared transmitter to take control of your television. We entered the details for our TV and, within seconds, we were able to navigate the EPG, record programmes and change channels.

It’s a handy addition, but basic.

Verdict
The final question is one of cost: as HTC’s range-topping handset, the One commands a high price. It will be on various plans, starting around $45 and can be purchased outright for $700.

On balance, the HTC One justifies that premium. The loss of expandable storage is a blow, but there’s little else amiss: it’s a stylish and highly capable all-rounder. HTC needed to come out fighting with its latest handset, and it’s done so with gusto: the One is the finest smartphone money can buy at the time of writing. The only serious competitor on the horizon is the Samsung Galaxy S4, which  had been announced but hadn’t officially launched when we went to print. For now at least, HTC has a real winner on its hands, but one wonders if it can translate this into a real comeback.

7 steps to MSP success: from pricing to specialisation
By Mike Jennings
Jun 4 2013
8:11AM