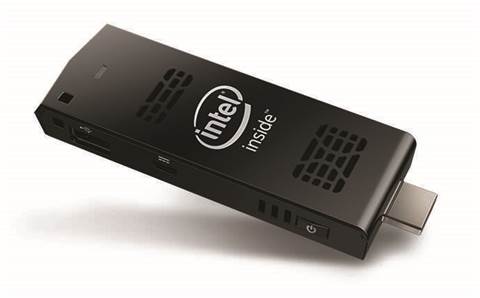 With Intel’s Compute Stick, less is more, as the adage goes. The tiny device is essentially an oversized USB drive that doubles as a tiny low-powered Windows 8.1 PC. It can turn any HDTV or monitor into a bare-bones PC for a staggering low price of just under US$150.

For consumers, the Intel Compute Stick is part novelty and part ultimate streaming media tool. The oversized thumb drive puts Amazon’s Fire TV Stick (US$34) and Google Chromecast (AU$49) to shame when it comes to its ability to pipe 1080p video to an HDTV and run lightweight Windows applications.

But what makes the Intel Compute Stick a game-changer isn’t its consumer appeal. Rather, the biggest potential is as a digital signage tool, or powering a digital classroom or being used as a point-of-sale device or information kiosk.

The hardware includes an HDMI port that plugs into the side of a display, power port that needs to plug into an outlet, a microSD card slot and a full-sized USB 2.0 port. The Compute Stick has 802.11 b/g/n Wi-Fi, Bluetooth 4.0 and includes McAfee Antivirus Plus subscription.

While the Compute Stick is a stunning example of how Intel has shrunk the size of a PC into an oversized HDMI stick, it’s still tethered to the real world of peripherals.

During setup, this was painfully apparent. After plugging in the HDMI Compute Stick and connecting it to the power outlet, it fumbled for a few more minutes than we would have liked, linking a Bluetooth keyboard and mouse.

The Compute Stick also has a USB 2.0 port that can make zipping through the Windows 8.1 setup menus go faster with a compatible USB keyboard or mouse. Overall, the Bluetooth radio was spotty, requiring us to repair either of our peripherals on a number of occasions. However, setting up was a breeze once we got past pairing the mouse and keyboard.

You can either associate the Compute Stick’s Windows 8.1 with Bing OS with an existing Microsoft account or create a new one. Linking, updating and setting up the stick only took about 15 minutes.

You’ll spend a lot of time waiting for the software to update, but once it is done you’ll have a fully functional PC with all of Windows’ default apps – from Internet Explorer, Control Panel to Microsoft Word – at your disposal.

Microsoft has added a few navigation tweaks designed to make Windows 8.1 easier to use on an HDTV. For example, there is a hot spot in the upper-left-hand corner that allows a user to simply drag the mouse into that corner to switch between apps. And just as with any version of Windows 8.1, there are a lot of customisation tweaks thanks to the pliability of the OS.

The Intel Compute Stick with a 1.3GHz Atom processor won’t win many performance benchmark wars. Think of this as more netbook than notebook.

However, as a dedicated streaming device, Intel’s Compute Stick passed with flying colours with everything we threw at it. We were able to stream video at full 1080 HD resolutions without a hiccup. Media files played off the stick’s MicroSD port as expected.

For couch potatoes, relying on the Intel Compute Stick comes down to the trade-off for functionality in return for fumbling with a keyboard and mouse in front of the TV. Or one can choose a slick AppleTV-like experience that allows a user to sink back into the sofa and use a clicker to navigate a limited menu of adequate content options.

To be clear, this is neither a dedicated streaming device nor a PC. It’s part both – including a tablet. It’s not going to replace a PC any time soon.

And for the early adopter crowd, we see the Compute Stick as an affordable add-on that brings compute power to a home theatre system. No longer are users limited by streaming devices from Amazon, Google or AppleTV and their walled gardens of content.

But, of course, to think about this breakthrough computer solely as a consumer device is missing a huge part of the market in which it will play.As a business tool aimed at commercial markets such as digital signage, the Intel Compute Stick has the potential to be downright disruptive.

From the vendor “The Intel Compute Stick offers the flexibility and convenience of a full computer operating system for both home and businesses. Thin clients, kiosks, entry level digital signage, and other solutions that require basic computing in a tiny, low power solution are just a few examples of business usage models.” - VR Rajkumar, channel sales director, Intel Australia and New Zealand