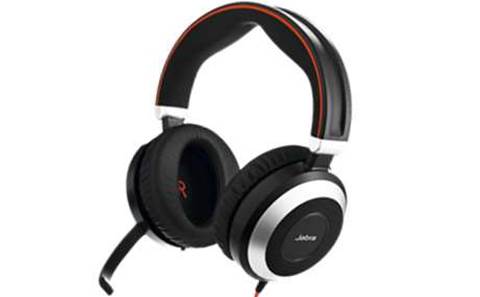 When the Jabra Evolve 80 headphones arrived in the CRN office, we had been expecting your garden variety teleconferencing headset. We didn’t anticipate a pair of cans to rival the giant headphones seen on the morning commute.

That said, we were pleasantly surprised.

Looks aside, this product isn’t a competitor to Beats or Monster DNA though. The Evolve 80 is a Microsoft-certified office headset that’s been optimised to use with Skype and Skype for Business (formerly Microsoft Lync).

A few nifty features, such as active noise cancellation, set the product apart from a regular headset. The speakers have a small microphone that picks up outside noise and inverts the wavelength. The inverted sound is then played back into the speakers, essentially erasing the sound. You’ll still be able to hear people talking, but all low-frequency noise will be muted.

It’s what these headphones do best, and if you appreciate quiet while you work, you won’t mind paying extra.

Another feature aimed squarely at the "quiet please" crowd is the Do Not Disturb light on the side of the cans. Push the centre button on the controller and the headphones will light up red, warning co-workers not to bother you on an important call or whatever work-related – or non work-related – activities you might be up to.

As far as actual communication, the microphone comes through clearly and cuts through external noises. The internal speakers will capture everything, and are great for music playback too.

The controller panel connects to the headphones via 3.5mm cable, so you can still use them with your phone or iPod, if you still have one for some reason. However, you’re going to need to charge them up if you want to use active noise cancelling on those morning commutes.

Thankfully, the Jabra Evolve 90 charges via micro USB, but doesn’t actually come with a charger in the box. If you’re an Android user, you’ll probably have plenty lying around anyway. As for battery life, Evolve takes three hours to fully charge and lasts a few days, so there’s very little downtime.

The Jabra Evolve 90 costs a hefty $429. You definitely get what you pay for and the headset compares favourably to consumer headphones, but a full office roll-out will cost a pretty penny.

The other big, orange elephant in the room is the design. The size will stick out in the office compared to some of Jabra's other sleek headsets. You might even turn a few Beats-wearing heads on the train.

Jabra distributes through Ingram Micro and 24/7 Distribution in Australia, and the Evolve 80 is available to all reseller partners. Some of Jabra's top Australian partners include Telstra, Optus, Data #3, Dimension Data and Ethan Group.

The Evolve series is also available in four cheaper models, ranging from $68 to $235 RRP.

Grabbing the hybrid cloud opportunity with Lenovo and Azure Services
By Brendon Foye
May 22 2015
11:41AM