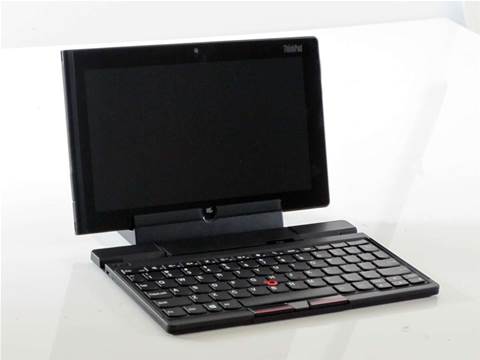 The Lenovo ThinkPad Tablet 2 is a 10.1in tablet that runs on Microsoft's new touch-friendly operating system, Windows 8 Pro.

Its main claim to fame is its optional docking connector and wireless keyboard, which turn the device into a miniature all-in-one (AIO) PC. 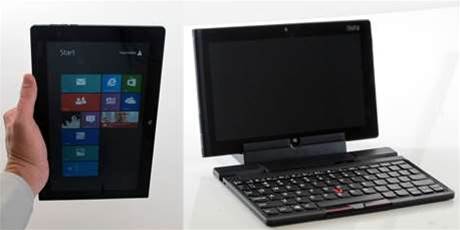 The ThinkPad Tablet 2 in tablet and AIO modes.

Boasting the full version of Windows 8, a host of enterprise-friendly software and an inbuilt digitiser pen, the Lenovo ThinkPad Tablet 2 is a decent option for businesses looking to migrate to the new OS.

On the downside, a Windows 8 touch screen laptop will offer much of the same functionality and is arguably better suited to a virtualised desktop environment. It's is also a bit pricey when all the necessary components are added together (the 64GB version we tested cost $919 for the tablet alone).

That said, the Tablet 2 remains one of the better Windows 8 Pro tablets on the market, at least until the Microsoft Surface Pro makes its belated entrance.

The Lenovo ThinkPad Tablet 2 is sold in a range of configurations with prices starting at $749. The keyboard and docking connector are sold for $149 and $99, respectively.

The inclusion of 3G is a big plus for mobile workers and is something that many rival tablets lack, including the Samsung Galaxy Note 10.1, Asus Vivo Tab RT and Google Nexus 7.

Unlike some of the other Windows 8 tablets we've tested, the Lenovo ThinkPad Tablet 2 comes with the full, non-RT version of the OS (AKA Windows 8 Pro). This makes it better suited to business users and people who require a fully-fledged mobile PC. 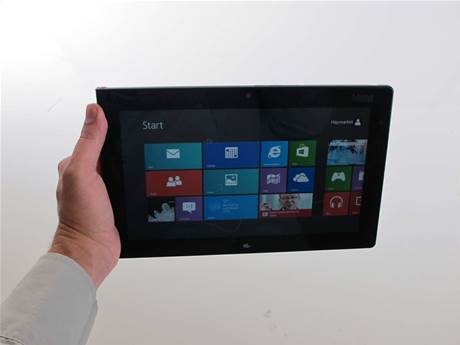 While we're on the subject of Windows 8, we need to mention the Windows Store, which is currently limited by what it offers. Some popular third-party apps are not currently available on the platform, such as Dropbox and Pocket/Read It Later. (You can still download these applications via the desktop mode, but it's not an ideal workaround.)

With any luck, this situation will begin to change as support for the fledgling operating system grows.

The ThinkPad Tablet 2 comes with a handful of pre-installed Windows 8 apps (including Skype, Evernote and Amazon Kindle), the music streaming service Rara and a trial of Microsoft Office.

Lenovo has also included some business-centric applications of its own ranging from Lenovo QuickSnip to Lenovo cloud storage. A fingerprint reader, IT manageability technologies and enterprise-level encryption tools are also included.

The Lenovo ThinkPad Tablet 2 weighs in at 565 grams and measures 9.8mm at its thickest point, which makes it roughly the same size as most 10-inch tablets.

The build quality is what we've come to expect from Lenovo. It's a sleek and solidly constructed tablet that's easily a stylistic match for the Apple iPad. The glossy black finish might look a bit plain to some people, but we think its target audience of business users will appreciate the no-nonsense design.

The tablet handled well during testing. All physical buttons remain readily accessible in both landscape and portrait modes. If we have one caveat, it's that the default UI's icons are a little on the small side, which can make touch screen selection a hit-and-miss affair. This is especially noticeable when attempting to access menus in the IE browser.

Thankfully, the included digitiser pen eliminates this issue. It works a treat and is also suitable for note-taking, signature capture and document markup. [Note: only some versions of the ThinkPad Tablet 2 come bundled with this accessory.] 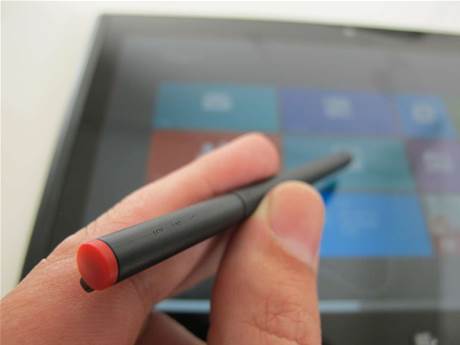 The included digitiser pen suits a range of purposes.

In AIO mode, the Lenovo ThinkPad Tablet 2 resembles a shrunk down office PC adhering to the pizza-box form factor. Setting up is simple; the tablet slots into the dock (which doubles as a monitor stand) and connects automatically to the Bluetooth-enabled keyboard.

Truth be told, we're not 100 percent sold on the tablet/AIO concept: the addition of a bulky docking connector makes the device extremely fiddly to carry around. (Tellingly, Lenovo's proprietry leather slipcase only has room for the tablet and keyboard; not the dock that bridges them together.)

The form factor also lacks the 'use-anywhere' convenience of a laptop/tablet hybrid, such as Asus' Vivo Tab RT or Lenovo's ThinkPad Twist. Instead, a desk is required to use the keyboard effectively. (While it's possible to attach the tablet directly to the keyboard, it doesn't lock into place, which makes accidental drops a real worry.)

That said, if you spend a fair amount of time in the office -- and don't mind using a tablet on the road -- the Lenovo ThinkPad Tablet 2 provides a reasonable balance between both working environments. For most users though, we can't help but feel that a laptop would be more convenient.

The keyboard comes with an optical trackpoint with its own battery and left/right/centre scroll buttons. The keys are responsive, if a little on the small side. The docking connector bolsters connectivity via three USB 2.0 ports, HDMI and RJ45 Ethernet. 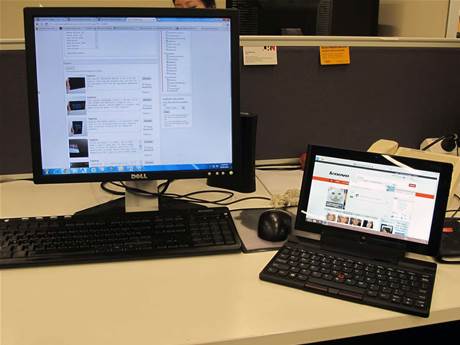 The Lenovo ThinkPad Tablet 2 compared to an all-in-one PC.

The Tablet 2's 10.1in antiglare multitouch display has a native resolution of 1366x768 pixels. This is significantly lower than the Apple iPad's celebrated retina display (2048x1536) but remains on par with most Windows 8 tablets.

We tested the Twist's computing performance using PCMark7; a Windows 8-optimised benchmark that assesses a laptop's CPU responsiveness, media playback and multitasking. It received an overall score of 1434. This is disappointing for an all-in-one PC but remains a reasonable result for a tablet. By contrast, Lenovo's ThinkPad Twist ultrabook received 2904 in the same test.

In our battery tests, the Lenovo ThinkPad Tablet 2 held out for a little over nine hours which is a solid result for a tablet.

With Microsoft's Surface Pro models currently unavailable in Australia, the Lenovo ThinkPad Tablet 2 has managed to fill a gap in the market. The unusual AIO form factor wont be to everyone's taste, but it remains a reasonable choice for users requiring a proper Windows 8 tablet.