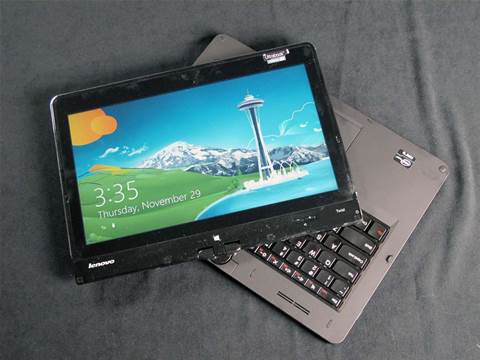 Unlike competing hybrid products, the ThinkPad Twist does not have any detachable parts. Instead, the display 'twists' 180 degrees and folds back over the keyboard – just like those convertible slate PCs of old.

This allows the device to be used in several ways depending on how the screen is positioned; ranging from 'stand' mode for business presentations to 'tent' mode for personal video playback. 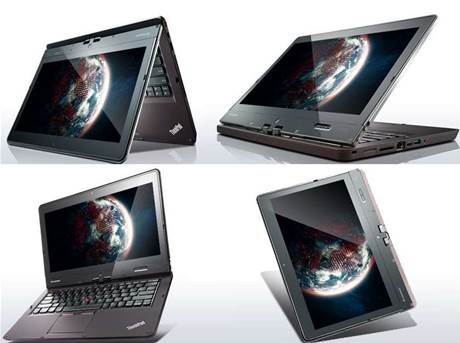 The ThinkPad Twist in tent, stand, laptop and tablet modes.

While the 'slate' concept might seem dated, Lenovo has packed plenty of cutting-edge technology into the Twist, including a third-generation Intel Core CPU, a SATA solid state drive, USB 3.0 connectivity and a multitouch HD display powered by Windows 8.

The result is an affordable and versatile introduction to touch-enabled business computing -- albeit with a few design quirks.

The version we tested came with a mid-range Intel Core i5-3317U with a clock speed of 1.7GHz. The chip boasts two cores and Hyper-Threading technology for higher processing throughput, making it suitable for multitasking and taxing applications.

When it comes to connectivity, the ThinkPad Twist is a bit of a mixed bag. It has only two USB ports, but it also comes with inbuilt ethernet, which some new ultrabooks lack.

To its credit, Lenovo has kept the bloatware to a minimum with the Twist; you get a handful of Windows 8 apps (including Skype, Evernote and Amazon Kindle), the music streaming service Rara and a trial of Microsoft Office.

The ThinkPad Twist's main claim to fame is its rotating hinged design which allows it to be twisted, turned, folded and flipped into four chief form factors.

The Twist's hinged design is fautless

Lenovo has put a lot of effort into the engineering of this device and it shows: the centre hinge is smooth and sturdily constructed, allowing the user to switch between form factors with a lazy rotation of their wrist. Even if you've never handled a slate before, it quickly becomes second nature.

In laptop mode, the ThinkPad Twist sports a very conventional design with a matte black finish. It's certainly not the most stylish ultrabook on the market, but many business users are likely to appreciate this no-nonsense approach.

The full-sized keyboard and touch screen handled well during testing, with one significant caveat -- the display has a habit of randomly switching to portrait mode when it should be in landscape.

This happened to us with alarming frequency and necessitated tilting the laptop or turning the screen on and off to get the correct viewing mode. While the issue is quickly averted, we imagine it will frustrate some users nonetheless.

The Twist in tablet mode: imposing.

With dimensions of 313x236x20mm and weighing over 1.5kg, the Lenovo Thinkpad Twist is slightly thicker and heavier than the average ultrabook. However, it remains compact enough to carry around with ease.

The same can't really be said about the tablet mode however; it's simply too big and cumbersome compared to others on the market.  If the tablet mode is particularly important to you, we'd recommend snapping up a smaller hybrid like the Asus Transformer Pad Infinity.

The Lenovo ThinkPad Twist comes with a 12.5in five-point multitouch screen with a native resolution of 1366x768 pixels.

This is lower than the current crop of high-end ultraboooks such as the Samsung Series 9 and results in slightly muddier visuals. On the plus side, the viewing angles on the IPS display are excellent, which definitely comes in handy when using the stand mode. 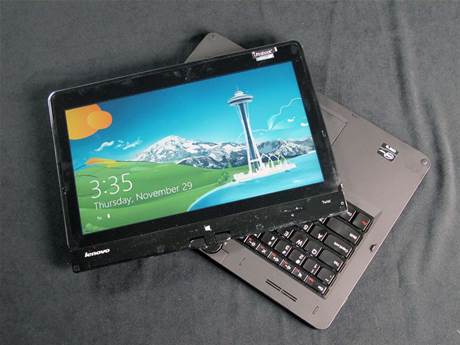 Screen resolution is good but not great.

Lenovo has opted for a high-gloss Gorilla Glass display for the Twist which is typically more susceptible to fingerprint smudges than matte displays.

That said, the ThinkPad Twist seemed to hold up pretty well: the only time we felt compelled to reach for a cleaning cloth was after a greasy lunch.

The touchscreen icons are very responsive to the touch; especially when compared to Microsoft's prior attempts with Windows 7. All in all, this is a good, solid display for the asking price.

We tested the Twist's computing performance using PCMark7; a Windows 8-optimised benchmark that assesses a laptop's CPU responsiveness, media playback and multitasking. It received an overall score of 2904, which is middling for an ultrabook in this price range.

Its performance is more than adequate for everyday computing and most office tasks. Battery life, meanwhile, is a little on the light side: you can expect to get around five hours of heavy use in between charges.

The Lenovo ThinkPad Twist is not particularly powerful when compared to other ultrabooks on the market and some aspects of the design feel underbaked. That said, it's a highly versatile Windows 8 laptop that will suit business users migrating to the new OS.
Got a news tip for our journalists? Share it with us anonymously here.