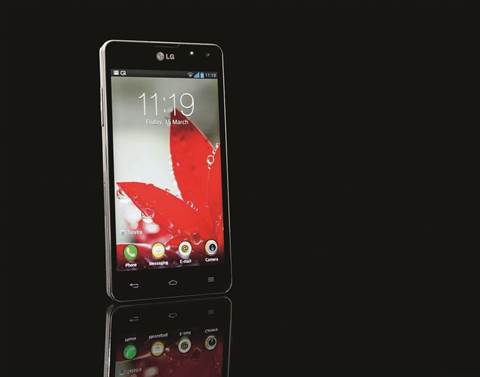 Last year’s Nexus 4 was in many ways a revelation, one of the best smartphones on the market and a true surprise from LG. Until then the company had been heavily focused on the prepaid, budget smartphone market, and the Nexus 4 was our first look at what LG was capable of at the high end.

The Nexus 4 was, in many ways, based upon LG’s own brand Optimus G, a 4G focused model that has now launched in Australia. The Optimus G bears many of the same design features as the Nexus 4, whilst also sporting some individual touches. Where it differs most is in the underlying hardware, and the extensive software additions that LG has slapped on top of Android.
Under the hood of the Optimus G sits a 1.5Ghz quad core Snapdragon S4 Pro CPU, with Adreno 320 GPU and 2GB of RAM. It sports a 13 megapixel camera, 32GB of onboard storage and packs a non-removable 2100mAh battery. It is worth keeping in mind that the battery is non-removeable, and the storage cannot be expanded, but as long as you are at peace with this we cannot fault the specs of the phone.

The front and back of the Optimus G are covered with a layer of Gorilla Glass, with metal highlights around the edge. This frames a truly gorgeous 1280 x 768 IPS screen. LG has implemented a technology that it dubs Zerogap touch, which embeds the touch electronics into the screen itself, reducing the distance between the glass and the IPS panel. This reduces glare significantly, and means that the Optimus G has an excellent screen for outdoor use.

This all makes for a package that feels good in the hand, with just enough heft to it to make it comfortable, although we do worry that the slick nature of the glass back means the Optimus G has the same potential to slide off tables as the Nexus 4. In practice we’ve never experienced this, but it is still worth keeping in mind, considering that we have heard from readers who have encountered this issue with the Nexus.

Software
One area in which LG has done a lot of work is in the software it has layered on top of the Android 4.1.2 operating system running on the phone. The most impressive of this is an app called Quickmemo, which allows you to scribble notes over the top of any content on the screen. If you take a call, for example, and need to write down a number, it is easy to open quickmemo and scrawl it down. This memo can then be locked in place, allowing you to navigate your phone normally, with the text remaining in place. You can then, for example, open up your phonebook and enter the number you scrawled before dismissing the memo (or saving it for later).

The Optimus G also has the ability to run a select number of applications in Windowed mode, allowing you to watch a video, for example, while doing other things. We’ve seen this kind of functionality on some Samsung offerings before, but it is still a rare thing in the world of Android.

Performance
When LG launched the Optimus G overseas last year, it was one of the most powerful handsets on the market, and was a standout product. Unfortunately LG ended up delaying its Australian launch until late March this year, at which point it was already getting old in smartphone terms. This is played out in our benchmarking, where it has been beaten consistently by newer phones like the Sony Xperia Z and HTC One.

One final mention needs to be made of battery life. As we know all too well, 4G phones are notorious battery suckers, and the reality is that lasting a day of use is all we can really expect of such handsets. To this end the Optimus G performs admirably, lasting through a full day of use on a single charge. Just don’t expect to eke days of performance out of the handset.

All in all, the Optimus G is an excellent phone that has landed too late to make a serious impact. The Samsung Galaxy S4 draws ever closer to release, while the HTC One has blown us away and landed smack bang on the A-List this month. Even LG has moved on from the Optimus G overseas, with the new Optimus G Pro doing the rounds in other markets.

This phone does reinforce what we thought after the launch of the Nexus 4 – namely, that LG is shaping up to be a serious competitor in the smartphone space, with excellent hardware and software on offer. All it needs to do is bring its phones to the Australian market in a more timely fashion.

Cloud application revenue made easy
By John Gillooly
Jun 17 2013
8:40AM