In Microsoft's own words, the Surface Book is both “the ultimate laptop” and “the future of laptop computing” – but what's truly surprising is that, in many ways, it's not far wrong.

That said, the Surface Book didn't make a particularly spectacular entrance. After all the bombast of the launch, and all those many megapixels of sneak peeks strewn across the web, I was eager to see the Surface Book with my own two eyes.

However, despite my expectations, or maybe because of the sheer weight of them, I wasn't blown away.

Although Microsoft's literature indicates it's cast from a painstakingly-crafted slab of pale silver magnesium, it initially looked to me as if it were made from fashionably grey plastic. Very, very nice-looking plastic – the best kind – but plastic nonetheless. Oddly, there's something about the Surface Book that doesn't look like a premium-priced slab of metal.

Pick it up, and the cool-to-the-touch metal has a lovely silky texture, and while it weighs in at a fairly chunky 1.5kg, it largely feels like I'd expect a high-end laptop to feel.

I say largely, because even here there are negatives to be found. The slight fore and aft wobble in the display adds to the feeling of something being not quite as it should be. It isn't worryingly unstable, but at this price I was expecting something rock-solid and engineered to within a micron-thin whisker of perfection – not something with a slightly wobbly hinge.

There are other little, but equally perplexing, quibbles, too. Put it on a desk, and it's mightily tough to open the Surface Book one-handed without it sliding around. It's not even that easy to do when you employ both hands. Given the lofty expectation set by Microsoft's own marketing materials, this doesn't strike me as the pinnacle of design brilliance. 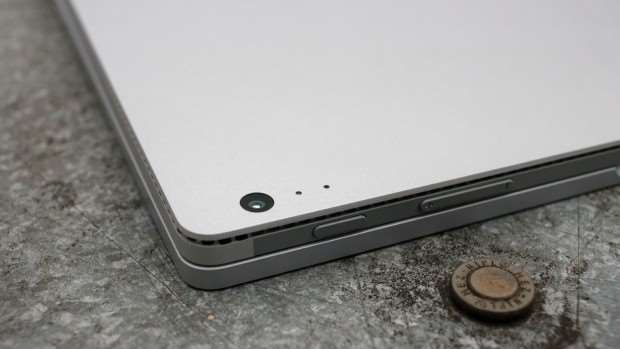 Rewind to October of last year, and Microsoft's launch for the Surface Book hid one thing brilliantly: very few people clocked that it was actually a 2-in-1 hybrid before the on-stage reveal. Even now, if you didn't already know, you could be forgiven for thinking you were looking at a premium laptop rather than a cutting-edge 2-in-1 from the Surface camp.

The only major giveaway to the Surface Book's talents? A Surface Pen is included in the box.

The novel “fulcrum” hinge is what allows the Surface Book to work its magic. The width of the hinge means that the display doesn't fold flat against the keyboard – something which irked a handful of our (admittedly mildly OCD) editorial staff – but on the flipside, it allows the Surface Book's tablet half to dock seamlessly with the keyboard section.

The long strips of metal concertina together to pivot the display back and forth, and while you can't push the display all the way back flat, this does at least mean that there's no danger of the Surface Book toppling backwards. Oh, and it looks great, too.

Dab the undocking button on the top right of the keyboard, or the onscreen icon in the Windows 10 taskbar, and the undocking procedure is accompanied by a tiny LED flitting from red to green, and the quiet whirr of the “muscle wire” mechanism releasing the tablet section.

No, that's not a typo: it really does use “muscle wire”. The Surface Book's ingenious locking mechanism is actually made possible with strands of thin nitinol wire that contract when an electric current is applied. Once those strands release their grip, magnets still hold the tablet firmly in place, so it doesn't just fall backwards – you have to make effort to separate the two. 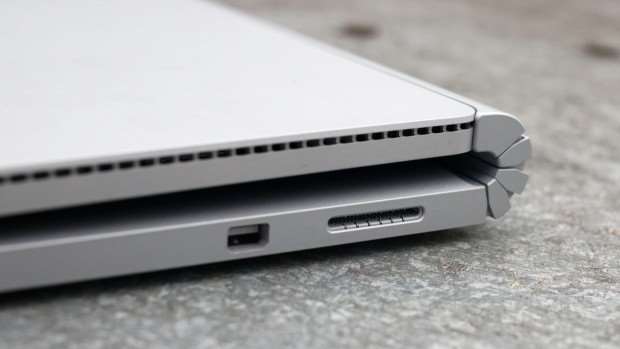 That done, you can either grab the tablet and wander off as you please, or you can spin it around 180 degrees and re-dock it to use the Surface Book in what Microsoft rather confusing calls 'tablet' mode.

This latter scenario has two benefits: the first is you get the benefit of the discrete Nvidia GPU, secondary battery and connectivity in the keyboard; the second is you can choose whether to use the Surface Book as an on-desk graphics tablet or just a super-powerful Windows tablet that you can carry around. It's worth mentioning, too, that in this mode, the Surface Book's wide, rounded hinge is actually a good thing, as it makes it easy to hold in one hand and simultaneously scribble with the other.

Next: The laptop that can replace your tablet?