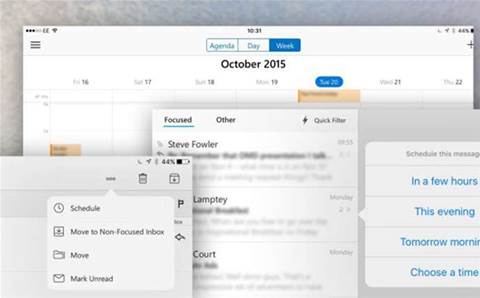 When Outlook for iOS was launched at the start of this year, it's fair to say that it had some rough edges. Based on Acompli, which Microsoft had bought for over US$200 million in December 2014, Outlook for iOS (and later Android) lacked things like shared Exchange calendars and support for out-of-office messages, as well as being a little likely to crash.

However, even then the good outweighed the bad. This, after all, was a powerful email and calendar app that not only supported Exchange, but also Gmail, Yahoo and iCloud accounts. To this, Microsoft has added support for any IMAP account, which immediately fixes one of the biggest issues with previous versions. You can also hook up cloud file services: not just OneDrive, but also Box, Dropbox and even arch-rival for Office, Google Drive.

The key features, though, are all about managing and triaging your email. Outlook includes a “Focused Inbox” view, which shows only the emails that are most important to you, based on what Outlook knows about how you respond to different people and messages. Anything that doesn't fit the bill is filed under “Other”.

If you've used third-party products like SaneLater, which does the same thing but in the cloud, this approach will be familiar and very welcome. 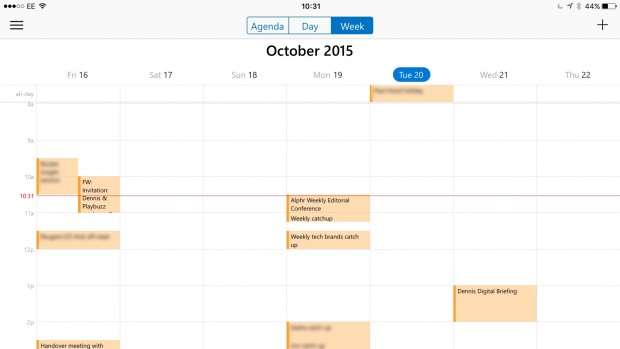 It makes a massive amount of difference to reducing the clutter of the average inbox, and it's actually pretty good even when first installed at working out what's important. If it does make a mistake, you can correct it (and help it learn) by using a menu option to file the email into “Other” (or vice versa).

Triaging email is also simple. Swipe left to Archive the message. Swipe right to “Schedule” it, which removes it from your inbox until a later date and time. There's also a Quick Filter option which lets you filter to only see those emails that are unread, flagged, or have files attached to them.

And Outlook's integration with files is a major plus point. There's a Files tab that allows you to pick documents to work with from all the supported file services, but also shows you files which are hiding in your inbox – an incredibly useful feature if you're trying to find a file someone has sent you (as often happens to us).

Overall, Outlook has now moved on from the “work in progress” status it enjoyed on launched. Both iOS and Android versions now feel more stable (the Android version, on release, was particularly buggy), and integration of files and calendar into a single app makes working much easier.

If Microsoft can keep up this pace, then Outlook will be a huge win on mobile – and that $200 million will start to look like a bargain.