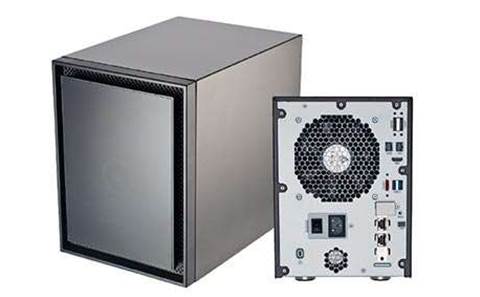 The ReadyNAS 716 uses the same well-built chassis as the ReadyNAS 516, but power has been beefed up with a 2.5GHz Intel Xeon E3-1265L v2 and 16GB of ECC DDR3 RAM. Expansion potential is equally good, with three rear eSATA ports for hooking up an EDA500 five-bay desktop expansion box.

Two Gigabit ports are embedded and 10GbE support comes courtesy of a dual-port 10GBase-T card in the single expansion bay. Unlike Qnap’s appliances, which support a range of standard Intel and Emulex 10GbE cards, Netgear’s is proprietary and can’t be changed for another brand.

The front door has an OLED display, which is used to scroll through various status displays using the central backlit touchpad. A proximity sensor wakes up the touchpad when you wave your hand in front of it, but we found the display itself difficult to read in bright light.

Initial installation is simple using Netgear’s web-based ReadyCloud portal, which discovers your appliance and sets it up for you. The ReadyCloud portal can see all appliances registered to your account regardless of their location, and lets you set up users who can view, add or delete files and folders from the portal. Files can be copied to the appliance directly from the desktop by dragging them into the portal’s Browse page.

A key feature of all Netgear’s new ReadyNAS appliances is the switch from EXT4 to BTRFS – a move that brings support for unlimited block-level snapshots for both NAS shares and iSCSI LUNs. For shares, you can permit network access to snapshots or hide them. File, folder or LUN recovery is just as simple: open the Dashboard’s timeline graph, choose a snapshot and select the rollback option.

Our review sample arrived with all six hot-swap bays fitted with 100GB Intel SSDs. Clearly that’s not a great choice if capacity is a priority, but it gave us an opportunity to see how quickly the 716 could transfer data over 10GbE.

Performance was impressive, with Iometer recording raw sequential read and write speeds for a mapped share of 1,032MB/sec and 600MB/sec – or around 8Gbits/sec and 4.7Gbits/sec. This translates to very fast real-world speeds: a 22.4GB mix of 10,500 small files transferred from the server’s RAID5 array to the share at an average of 220MB/sec.

To measure sustained NAS throughput we also copied our 50GB Iometer test file to and from the share, which returned read and write speeds of 300MB/sec. For IP SANs we saw copies of the 50GB test file to a 100GB target return read rates of 316MB/sec, while a backup of the 22.4GB test folder averaged 249MB/sec.

Using Netgear’s real-time antivirus scanner hits performance hard. With this enabled, we saw 10GbE speeds for our 22.4GB NAS copy drop by 40 percent to 132MB/sec. Frustratingly, although the new Anti-Virus Plus app adds a scheduler for regular on-demand scans on selected folders, to use it you must enable the real-time scanner as well. The only way around this is to declare certain folders, or all of them, exempt from scanning.

Backup options are very similar to those of the previous ReadyNAS generation. You define sources and targets, which can be any local NAS share or folder on other systems, and the appliance will manage them all.

The 716 natively supports Dropbox, plus Netgear’s ReadyDrop private cloud system for those who prefer not to entrust their data to third parties. An app adds support for Symform cloud backup, while replication across ReadyOS 6 devices using the separate cloud portal is now free.

With dual 10GBase-T ports as standard, the ReadyNAS 716 is good value, and scores over the competition with its unlimited share and LUN snapshots.

Next product below in the range RN516

The reviewers say “The clincher is performance: you won’t find a faster desktop NAS appliance.”