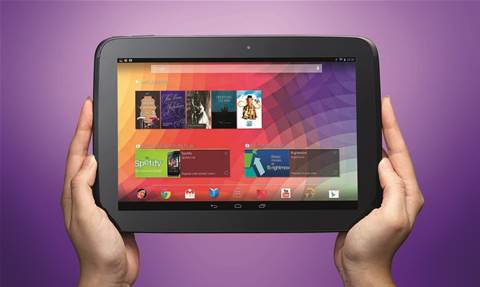 There's no point in rival tablet manufacturers pricing their 10in products the same as the iPad if the quality isn’t at least as good.

The all-round quality of Apple’s hardware allied with the sheer weight of tablet-specific apps means any similarly priced Android tablet has its work cut out. At last, though, it looks as if we have a contender at this size: Google’s Nexus 10.

Hot on the heels of the excellent and well-priced Nexus 7, the Nexus 10 undercuts the iPad by $70, yet on paper it surpasses Apple’s tablet in almost every regard.

It’s the highest resolution screen available on any tablet, and everything on it looks as sharp as cut glass. Text in ebooks and web pages looks fantastic – no matter how close you zoom in, high-resolution photographs look glorious and Full HD movies are an absolute joy to watch.

The resolution is an impressive feat on its own, especially at this price, but it isn’t only the numbers that stack up. Set the two tablets side by side and you’ll see that quality is close too. The Nexus 10’s IPS panel is bright, reaching a maximum of 415cd/m2, and has a contrast ratio of 807:1 – both figures that aren’t far off the iPad’s 426cd/m2 and 906:1.

Colours on the Nexus 10 seem flatter than on the iPad, however, and a touch less saturated. Viewing angles aren’t quite as good either, with brightness falling off more quickly as you move away from the perpendicular, but the iPad’s display does have a tendency to crush darker shades of grey into black, resulting in loss of detail. To our eyes, we’d put the iPad’s display in front, but only by a whisker.

The Nexus’ physical design is much less spectacular: it’s entirely clad in plastic rather than metal, and a rather flexible plastic at that. The soft, rubbery finish feels strangely sticky under the finger. It won’t slip out of your hand easily, but doesn’t feel luxurious.

And yet it’s the sort of design that slowly grows on you. It’s slimmer than the iPad, measuring a mere 9.2mm from the screen to the thickest part of the case, and weighs only 603g, which makes it 59g lighter. The glass front of the tablet is shatter- and scratch-resistant Gorilla Glass 2, which gives us much more confidence in its ability to avert disaster than the iPad’s unbranded glass.

It’s also worth noting that the Nexus 10 has GPS where the wi-fi-only iPad has none, and there’s an integrated micro-HDMI output – with the iPad, you have to pay extra for an adapter. However, there’s no microSD slot to expand the integrated 16GB (or 32GB) storage.

Google’s Nexus 10 copes with the performance demands placed upon its core hardware with aplomb. Despite having as many pixels to manage as a 30in professional monitor, it feels responsive and smooth.

That’s down to the tablet’s ARM 15-based Samsung Exynos CPU – a dual-core unit running at 1.7GHz with 2GB of RAM. In SunSpider, this combination returned a quick time of 1362ms – faster than every other tablet we’ve tested aside from the fourth-generation iPad. In the Quadrant it scored 4626, only 315 points behind the Tegra 3-powered Asus Transformer Pad Infinity 700, and that had a lower-resolution display of 1920 x 1200.

7 steps to MSP success: from pricing to specialisation
By Jonathan Bray
Feb 13 2013
2:28PM