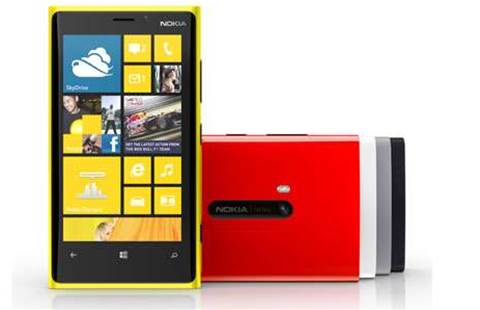 Given the buzz and anticipation around it, Nokia must have been pretty annoyed when HTC stole the limelight by getting its 8X out first.

And with its lovely design, fabulous screen and oodles of power, the 8X given the Lumia 920 a great deal to worry about before it even hits the shops.

So is this all a lost cause? Or is the Nokia destined to replace the HTC as the Windows Phone 8 device of choice before it’s even settled into the role?

It’s clear right from the start that this is an entirely different beast to the 8X, and not necessarily in a good way. Compared to the sleek, svelte HTC smartphone the Lumia 920 is chunky and heavy.

It’s actually only slightly wider and no taller, and at its thickest point the 8X is only 0.6mm thinner than the 10.7mm Lumia, but while the HTC tapers significantly towards the edges the Nokia remains almost universally thick, and the overall impression is that it’s massive.

Get over that initial shock, though, and the finer points of the Lumia 920’s design begin to reveal themselves. The rounded sides actually make it rather comfortable to hold, and the placement of the power button halfway up the right-hand side means it’s in the perfect place to be pressed by your thumb if your right-handed or middle-finger if you’re a southpaw.

In fact, as long as you’ve got reasonably large spades the Lumia 920 is really well suited to one-handed use, with your thumb happily reaching all of the most important buttons and on-screen icons – only the Back arrow requires any real stretching.

Also, although that 185g weight might mean you have to tighten your belt a little more than usual, it also conveys a sense of solidity that the HTC just can’t match. And where the 8X disappointed with a lack of positivity to its buttons the Lumia 920’s give enough physical feedback to make it an easy phone to use in the dark or control in a pocket.

We do have one other slight gripe, and that’s that there’s a thin channel running between the edge of the glass and the main body, and this seems to be just wide enough to attract a bit of dust. After a couple of days of use both that and the recessed ear piece were starting to look a bit grubby, while the mirrored-metal badge on the rear was attracting lots of smudges.

Mounted to that massive case is a monster 4.5in screen, and it’s a real beauty. It may have a slightly higher resolution than the HTC 8X, but given the extra 0.2in of display area it still has a slightly lower pixel density – 332ppi versus 341ppi for the HTC – but it’s obviously close and both are technically sharper than the iPhone 5’s retina display.

On the home screen there’s little to separate the two displays. The HTC is a touch brighter, but the Nokia counters with a little extra richness in the colour of the Live Tiles, and while the Nokia has the bigger screen its wider aspect ratio actually means it fits half a row of icons fewer on its homescreen.

It’s a similar situation with movies, with the 15:9 ratio meaning that by default you get thin black bars to the top and bottom of the screen, whereas the same video on the HTC fills the display entirely. Even so, the actual picture remains 0.2mm larger on the diagonal, and if that’s not enough you can always press the Zoom button, which fills the screen with only minimal cropping on the left and right.

Removing size from the equation, both screens are really fantastic. Both have very similar and extremely impressive levels of sharpness and detail, but the Nokia is capable of producing marginally deeper blacks.

On the other hand the HTC is brighter, and that makes the image more instantly arresting. It also has slightly greater viewing angles, and while we’re still slightly dubious as to the value of that on a screen that will be viewed by only one person the vast majority of the time, it may be a consideration for some. For us, the Nokia’s extra size is more useful to media-on-the-move consumption.

Where it comes to the actual performance, there’s no discernible difference between the two handsets, which should probably come as no great surprise seeing as both contain the same 1.5Ghz Snapdragon S4 processor backed-up with 1GB of RAM. That means that as with the HTC 8X, the Nokia is completely unflappable. We tried to coax it into some sort of stutter, slowdown or crash, but to no avail – this is one speedy, solid portable device.

It’s also well worth mentioning that the Nokia doubles the HTC’s storage to 32GB, and when combined with the hefty 7GB of free Sky Drive space you get for going with Windows Phone 8 that makes for a reasonable amount of space for photos, music, videos and apps.

Even better, it doesn’t appear to be particularly power hungry. Where the HTC was making us nervous about running out of battery after just eight hours, the Nokia withstood a full day of fairly intense testing and only became desperate for a charge around lunchtime the following day.

When playing video the Nokia continues to prove more efficient than the HTC, with the battery dropping 6 percent every half an hour compared to 8 percent for the HTC.

We really can’t let any talk of charging pass without mentioning the wireless charging plate, which does exactly what it says on the packet. It’s not essential, but if you can afford around an extra $70, it's worth buying one alongside the smartphone.

Given the speed of the handset and size of the screen it’s little surprise that the Nokia Lumia 920 is a demon when it comes to browsing the web. Pages load quickly, scrolling and zooming is smooth and snappy, and typing on the large virtual QWERTY is an intuitive pleasure.

Combining Nokia’s PureView expertise with an 8.7mp snapper means expectations are high for the Lumia 920’s camera, which is why it’s such a great shame that it turns out to be rather disappointing.

While the screen is perfect for framing shots and the dedicated shutter button a decent recreation of the real thing, shots take half a second longer to capture than they should, making quick-fire photography a little less quick-fire than it should be. The resulting photographs are also disappointingly soft and over saturated compared to the 8X, too. (The photo above shows the 8X on the left, the 920 on the right.)

That’s not to say the Nokia’s camera is horrible – for everyday shooting it’s perfectly passable, and it even has a couple of neat features, such as Smart Shoot, which takes five pictures in quick succession and allows you to choose the best shot of each person’s face individually.

It’s a lot of fun and genuinely practical, but be warned, changing faces also switches a small amount of the background, which while not a problem if its static can do horrible (or hilarious, depending on how you look at it) things to the faces of anyone who may be standing behind your subjects.

Microsoft will probably point to the bundled apps in Windows Phone 8 to do most of what you might be looking for (Xbox Music instead of Spotify, Sky Drive instead of Dropbox), but asking everyone to change their digital habits to fit in with a new mobile OS is a far cry from providing apps that make the transition easier and more comfortable. We expect those third-party apps will arrive, but they can’t come soon enough.

One advantage the Lumia 920 has is that the Nokia apps that come built-in are generally of a far higher calibre than those of the 8X. Most crucially, there’s Nokia Drive+, which can be used as a standalone sat-nav app or can be directly accessed through Nokia Maps.

It’s not the prettiest sat-nav and it lacks the really intelligent route planning of TomTom, but it is clear and easy to use and a heck of a lot more free than the TomTom app will be if it ever makes it to Windows Phone 8.

On top of that you’ve also got notables such as Nokia Music, which seems a little superfluous next to the far more substantial Xbox Music service that comes with Windows Phone 8, and Nokia City Lens, which gives you details of local shops, bars and eateries in fun, augmented reality-style.

As with the HTC 8X we expect most buyers of the Lumia 920 to make use of Xbox Music – at least until Spotify turns up. With 30 million tracks and really lovely presentation it’s a cracking app to use, and the sound quality from the Nokia is excellent – very direct, very punchy and with plenty of detail.

The bottom-mounted speaker is pretty loud and clear, too. We obviously wouldn’t recommend it for music listening, but for hands-free calls or sharing a YouTube video with a mate it will do absolutely fine.

So if you’ve decided to go for Windows Phone 8, the question you’ll be asking next is which of these two flagship phones you should choose.

It's a tough decision. The HTC is better looking but the Nokia is more comfortable to use. The Nokia’s screen is bigger but the HTC’s has better contrast and viewing angles. The HTC takes better pictures but the Nokia comes with better apps.

In the end we’d say that the Nokia’s extra storage, longer-lasting battery and cool features such as wireless charging just about swing it in favour of the Lumia 920, but it’s a close call and going for the HTC 8X certainly wouldn’t be a bad decision.

But should you be going for Windows Phone 8 at all? The OS itself is full of neat features and is a master at providing you with personalised, up-to-the-minute information from your friends, contacts and favourite news sources. It’s unique, refreshing and alive, especially compared to iOS.

The big issue remains that lack of apps. As it is now anyone moving from Android or iOS will have to make significant changes to the way they work and play in order to fit in with the Windows Phone 8 way of doing things, and that’s far from ideal.

So for most people we think waiting and watching for the right apps to arrive is the best approach, but if you’re not much of an app user or are lucky enough that your favourites are already there, Windows Phone 8 is well worth taking the plunge, and the Nokia Lumia 920 is a great smartphone to dive in with.

Grabbing the hybrid cloud opportunity with Lenovo and Azure Services
By Staff Writers
Nov 7 2012
9:49AM