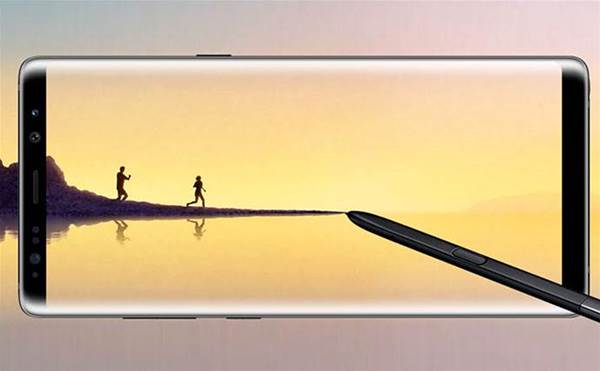 When CRN USA reviewed Samsung's Galaxy S8 Plus in the spring, we described the device as the ultimate smartphone for multitaskers. But Samsung has now one-upped itself with the debut of the Galaxy Note 8, which ships 15 September.

In our tryout with the Note 8 in recent days, we think there's good reason that Samsung didn't halt the device series after the disaster of the Galaxy Note 7.

The Galaxy Note 8 takes many of the key elements that Samsung introduced this year with the S8 and S8 Plus—most notably, a huge screen with minimal bezel—and gave them a Note spin. Importantly, we agree that there's enough difference from the S8 devices to warrant a distinct Note model.

The digital pen housed in the phone itself is back with the Note 8, and it works just as well as it did on the Note 7. The pen is natural to use, and the ability to take notes on the lock screen remains a great feature for the productivity-oriented.

The display is a highlight even though there's not much different here from the 6.2-inch S8 Plus. The Note 8 display measures 6.3 inches, and looks terrific thanks to its use of Super AMOLED and 2,960 x 1,440 resolution.

While we're talking display, we should mention one of the standout software features of the Note 8. We liked split-screen mode on the S8 Plus, which lets two apps share the display at a time.

With a huge screen, it can have a real benefit for multitasking. For instance, having your calendar and email open at the same time can save a lot of effort when you're trying to figure out your schedule on the fly.

But, we didn't love the multistep process of using split-screen mode on the S8 Plus. Samsung got the message, and the Note 8 has an upgrade—a feature called App Pair. The feature lets you open two apps in split-screen mode with a single press.

For instance, along with setting up email and calendar to open together, you might want to pair Facebook and YouTube. There is a little bit of setup involved to get the apps paired, and you do need to first access the "Apps Edge" panel on the right side of the home screen. One nitpick—it would be better to have paired app icons accessible directly from the home screen itself to make things even easier.

In terms of the phone's body, we think there are pluses and minuses. The Note 8 feels more solid than the S8 Plus, which is an advantage for a device that's meant for work use, including in rugged conditions.

But it's also noticeably heavier than the S8 Plus—13 percent heavier to be exact. It's a tad thicker, too. Hand fatigue can thus be a little more of an issue. While 40g might not seem like much, every little bit counts on a phone that gets heavy usage.

One of the most interesting moves Samsung made with the Note 8 is the inclusion of a dual-camera setup, which is a first for the company.

While Apple has pitched dual-camera as a consumer-y feature with the iPhone 7 Plus, Samsung is arguing the business case for having such a camera. Embedding first-rate images in workflows is becoming crucial to many professional scenarios, and machine analysis of photos is another growing trend that calls for the highest possible quality, according to Samsung.

Both cameras come with optical image stabilisation, and new features include "Live Focus", which lets you easily create a pro-looking photo with the background blurred automatically.

Battery life was solid in our tryout, with two hours of usage draining the battery just 12 percent of the way. Performance was excellent as well, thanks to the latest Qualcomm Snapdragon chip (the 835) and 6GB of RAM (compared with 4GB of RAM with the S8 Plus).

Like with the S8/S8 Plus, the Note 8 works with DeX. That's the docking station that uses the phone to provide a desktop experience on your monitor. Samsung has now enhanced the DeX software to allow for 50 percent more apps on one screen and to enable more DeX-optimised apps, such as videoconferencing products.

Another welcome feature with the Note 8 is wireless charging, something the Note 7 had, and that Apple is only now getting around to with the iPhone. There are also several biometric log-in options, including facial recognition, iris scanning and fingerprint. And the Note 8 comes with serious durability – IP68 water/dust resistance and Gorilla Glass 5 on both sides of the phone.

On pricing, it's clear this is a device that Samsung is targeting at people who can justify it at least partly as a professional investment. While much has been made about the potential pricing of the iPhone 8 in the ballpark of US$$1000-1200, the Note 8 is already there, with a starting price of A$1500.

All around though, with its combination of performance and productivity features, we think the Samsung Galaxy Note 8 is the gold standard right now for a work-oriented smartphone.

Grow your software revenue by selling these 5 affordable, essential tools for the modern workplace
By Kyle Alspach
Sep 6 2017
6:46AM