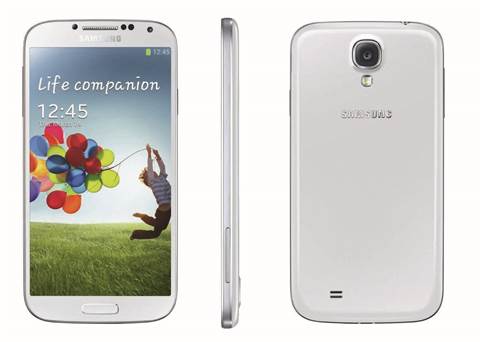 Over recent years Samsung has ruled the Android smartphone market, riding a wave of popularity that has turned its Galaxy lineup into the must-have Android device. Despite the fact that HTC in particular has consistently delivered handsets that are highly competitive with Samsung’s, there is no doubt that the Korean manufacturer has been the consistent winner when it comes to sales.

This battle has kicked up a notch, with the latest flagship Galaxy S4 launching just after HTC’s excellent One hit the market. We were so impressed by the HTC One last month that it rocketed straight to the top of the A-List. The big question this month is whether or not Samsung can knock
it off and take the mantle as our favourite phone.

One of the most striking things about the Galaxy S4 is its inherent similarity to last year’s Galaxy S3. At a glance they look near-identical, a by-product of similar materials being used and the fact that all smartphones are essentially just thin, rectangular slabs of screen nowadays. Unlike a lot of other phones out there, you can pop off the S4’s backplate, exposing both the removable 2600mAh battery and microSD slot – an important addition, considering that only the 16GB variant of the phone is being sold locally (and even then a huge chunk of storage is dedicated to Samsung’s software).

The front of the handset is dominated by a gorgeous 1080p Super AMOLED screen, with 440ppi making for an incredibly crisp and sharp image. Its only failing is that it can’t quite match the brightness of the HTC One’s LCD screen, which means that it ultimately only takes second place in the screen stakes.

The battle between the phones heats up when it comes to benchmarks. Despite the fact that the Galaxy S4 was touted to launch with an eight-core Samsung Exynos CPU, the local version packs a quad core Qualcomm snapdragon 600 CPU (the same as the HTC One). With a clock speed of 1.9GHz vs the HTC One’s 1.7GHz, this is no slouch, and its benchmark results bear this out. In Geekbench we saw a score of 3181, versus the HTC’s 2733, and in Quadrant the S4 showed a similarly slight lead, with a score of 12,616 vs the HTC’s 11,617.

Our testing over a variety of games showed consistently quick performance, and the 1080p screen makes gaming a very pleasant experience indeed. In our standard rundown tests the S4 showed 60% battery remaining after 24 hours – a similar result to the HTC One. Of course, your mileage will vary depending on your exact usage, but we had no issues running out of juice in everyday use as long as we charged it every night.

It is clear that the Galaxy S4 is an excellent piece of hardware. The plastic shell is perfectly functional, but it neither looked as stylish nor felt as good in the hand as the HTC One’s metal chassis.

Over our time using the handset, it has become obvious that one of the most polarising aspects of the Samsung Galaxy S4 is the software. The TouchWiz UI has had a huge amount of work put into it, and there are so many bits of included S-Software that it at times becomes confusing what does what. This isn’t helped by the fact that these features range between useful and eminently gimmicky.

Some of the flagship features of the phone – like ‘Air Gesture’, which uses an infrared sensor to allow for a touch-less interface – work sporadically, suffering under certain lighting conditions. We ended up disabling a lot of these sorts of features after a while, a largely personal choice but driven by the inherent inconsistencies experienced during our use of the handset. Similarly the default interface is chock full of proprietary Samsung Apps – some, like the excellent camera interface, are quite useful, while others are inferior to those delivered in a stock Android build. It also took some time to get used to accessing some of our favourite Apps – unlike stock Android, Google now is activated by holding down the left menu button, for example.

There is no doubt that the Galaxy S4 is one of the best Android handsets on the market today. While we may not like some of the inbuilt Samsung software, which at times feels more like bloatware than truly useful additions to the Android experience, the hardware and design of the phone is simply superb. Ultimately it isn’t quite enough to overtake the HTC One as our favoured handset, but it is well worth a look, especially if you value Samsung’s choice of removable battery. A great smartphone, even if it doesn’t take the crown of greatest smartphone.

Cloud application revenue made easy
By John Gillooly
Jul 17 2013
8:04AM