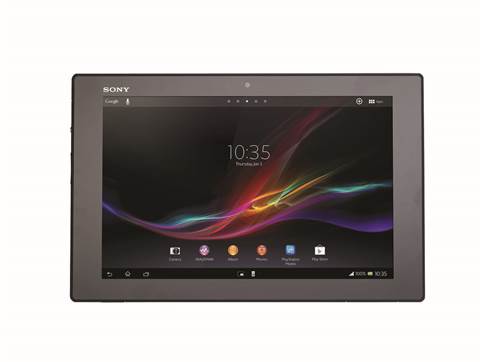 Full-sized Android tablets have been thin on the ground of late, with manufacturers concentrating instead on shoving out cheap, compact tablets by the dozen.

As such, the Sony Xperia Tablet Z is a breath of fresh air. It’s the first 10in Android tablet we’ve reviewed since the Nexus 10 – our current favourite Android tablet at this size – and it’s
a stunner.

The first time we picked it up, it seemed impossibly thin and light. Incredibly, it’s thinner than an iPhone 5, and you’ll barely notice its 495g weight when it’s in your bag. Its squared-off, angled edges and flat glass panels at the rear and front ooze class, and like its smaller companion, the Xperia Z smartphone, the Tablet Z is water- and dust-resistant, with sealed flaps covering all its ports.

In practice, the Tablet Z handled all the tasks we asked of it during testing, and played demanding games such as Real Racing 3 smoothly. But given the price premium over the Nexus 10, you’re entitled to expect more. We’d hoped to see better battery life and a more vivid screen, but the Tablet Z disappointed on both fronts, with a score of 9hrs 11mins in our looping video test, a maximum brightness of 370cd/m2 and a contrast ratio of 787:1 – all short of the Nexus 10’s results.

The Xperia Tablet Z has an 8.1-megapixel camera at the rear that produces reasonable snaps and 1080p video at 30fps. It tends to blow out highlights a little too easily in bright light, and it isn’t great in low light, but it’s fine for the occasional shot when the tablet is all you have to hand.

Embedded in the top edge of the tablet is an infrared transmitter, allowing the Tablet Z to be used as a universal remote control. We found setup a little hit and miss, but once we’d figured out which profile to use with our TV and set-top box, it worked perfectly. The remote control app can be used in full-screen mode, or you can bring up a pop-up control that sits on top of whichever app is currently running, making channel-hopping a breeze.

Although the Tablet Z doesn’t run the very latest version of Android, we rather like what Sony has done with its user interface overlay. The custom keyboard, which responds to each keypress with a light tinkle, exhibits no lag. The pop-up quick apps panel, launched via a small icon in the soft-button bar at the bottom of the screen, is another nice touch, as is the way the app drawer can be re-ordered to suit your own whim. You also have the ability to “throw” currently playing video or music to DLNA-compatible devices from Sony’s proprietary media software.

Is all this enough to make up for the high price? The answer has to be no. We enjoyed using the Sony Xperia Tablet Z, but it’s 25% more expensive than the Nexus 10, and while it boasts a more elegant design and tougher construction, it fails to compete with that device’s screen or its battery life. In short, the Tablet Z isn’t good enough to justify the extra cost.