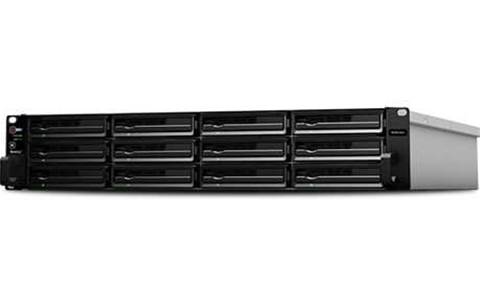 Synology’s latest rack NAS appliance offers a truckload of enterprise storage capabilities at a price that makes it attractive to SMBs. It packs an impressive feature list, and the DSM 5 browser-management software adds even more to the pot.

The 2U chassis supports up to 12 hot-swap SATA hard disks, and 12-bay RX1214 or RX1214RP disk shelves can be hot-plugged into the pair of 6Gbits/sec SAS interfaces at the rear. There are a quartet of Gigabit ports, and the two PCI Express slots accept Intel and Emulex 10GbE cards.

Both read and write caching using SSDs are now supported, but you’ll need two identical SSDs. If you opt for a read cache, the appliance creates a stripe from them; for a read/write cache, it creates a mirror array.

We installed an Emulex OCe11102-NM dual-port 10GbE card in the appliance, which was accepted without any issues. With a direct fibre connection between the server and appliance, copying our 50GB test file returned read and write speeds of 320MB/sec and 292MB/sec respectively. General backup operations will be quick, too: our 22.4GB test folder copied to a share at an average of 218MB/sec.

The new user interface – called DSM 5 – is easier to use than previous versions, and better suited to tablets. Businesses with multiple Synology appliances will also like the new Central Management System (CMS) app, which enables you to monitor them all from one interface.

The CMS app is installed on one appliance, where it discovers all local Synology boxes and gives you the option to add remote ones by IP address, FQDN or Synology QuickConnect ID. Selecting an appliance allows you to view its hardware, networks, volumes, hard disks and installed apps, remotely access its web interface, and update firmware and apps.

Synology’s clustering feature – currently in beta – is also accessed from the CMS interface. It allows you to create load-balanced, fault-tolerant storage pools spread across multiple Synology appliances, which are then presented as CIFS shares.

Synology’s new Cloud Sync package lets the appliance access and sync your Google Drive, Dropbox and Baidu Cloud accounts. We tested with Google Drive and Dropbox, where we added our account details and chose a folder on the appliance for syncing files.

Synology goes even further though. With Cloud Station, you can sync files between two Synology appliances, as well as other computers and mobile clients. We tested this with a DS1813+, and after installing the Cloud Station Client on it, were able to pair it with the RS3614xs+ using its QuickConnect ID and sync folders. Dave Mitchell

The reviewers say “At this price… the Synology takes a well-deserved place on the  A-List for its top performance, superior expansion potential and classy DSM 5 software.”